Home Lifestyle Arts & Entertainment In Netflix’s ‘Self Made,’ Octavia Spencer Gives An Unsung Heroine Her Spectacular... 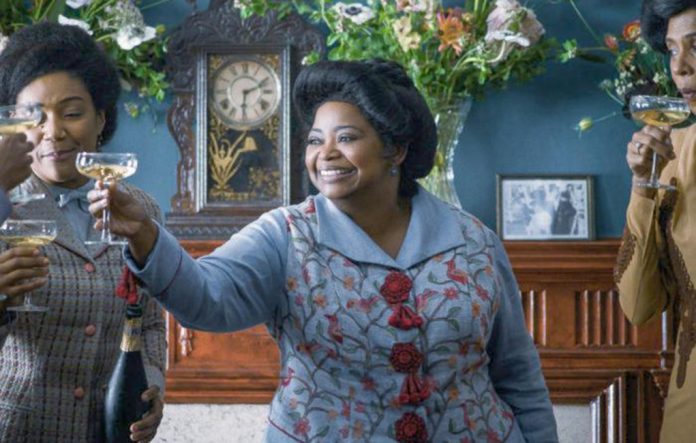 “Hair is power. You can’t imagine what it’s like to lose it,” proclaims the hero of Netflix’s fresh, lively and fast-paced period drama about America’s first self-made female millionaire — a woman you’ve likely never heard of.

“Self Made: Inspired by the Life of Madam C.J. Walker” chronicles the rise of the hair care pioneer (Octavia Spencer), a black entrepreneur whose “Cain versus Abel relationship” with her hair was the catalyst for a beauty empire that revolutionized 20th century ideals about female enterprise, African American commerce and beauty standards for women of color.

Like “Hidden Figures” or “When They See Us,” this four-part limited series, premiering Friday, chronicles a quintessentially American story of facing seemingly insurmountable systemic obstacles, even if, in this case, it’s a tale that’s rarely been told or celebrated outside of black history studies.

“Negro beauty culturists” and miraculous tinctures such as hair “glossine” and “wonderful grower” populate this vibrant series, which was inspired by “On Her Own Ground: The Life and Times of Madam C. J. Walker,” written by Walker’s great-great-granddaughter, A’Lelia Bundles.

Walker, aka Sarah Breedlove, was the first child in her family born into freedom after the 13th Amendment to the Constitution was ratified in 1865. But this story starts at the beginning of the 20th century, when the middle-aged mother is toiling as a laundress, with little time to worry about the thinning hair tucked under her turban.

But Munroe is marketing her product as the path to a “lighter, brighter” you! Walker argues she should be catering to the realistic needs of black women, who will never have “white” hair. The fledgling politics of black beauty standards — light skin versus dark skin, kinky hair versus smooth — and the industrial age collide.

Over each hourlong episode, Walker builds an empire convincing black women to embrace who they are with her products. As her uphill battle gains traction, Munroe, who once claimed Walker was “too dark to shine,” becomes a bitter business rival for life.

Co-executive produced by Spencer, Kasi Lemmons (the director of “Harriet”), LeBron James and others, “Self Made” is a joy to watch.

Re-creations of black Indianapolis in the early 1900s, its sidewalks filled with petticoats and button-up boots, its dainty daytime tea rooms and raucous after-hours ragtime clubs, are fun and captivating. The series’ glimpses of a burgeoning Harlem also bring a bygone culture to life in rich detail.

Spencer’s performance is dazzling. The role of pioneer comes naturally to her, and her character shows the scars of what it means to be a successful woman in a community and era where there were few. Men are threatened by her power: Booker T. Washington says he’d “rather endorse a palm reader than a hair culturist.” Female peers forsake her. Societal norms run counter to everything she hopes to achieve. And Spencer conveys all that victory and pain with compelling authenticity.

The rest of the cast look as though they had a blast bringing this story to life. Walker’s partner (Blair Underwood) struggles with his wife’s increasing independence. Her daughter, Leila (Tiffany Haddish), is a firecracker who provides moral support and comedic relief. Garrett Morris plays her tenacious father-in-law, the formerly enslaved Cleophus, while Kevin Carroll is her lawyer, Ransom, and Bill Bellamy is Ransom’s shifty cousin, Sweetness.

The series is punctuated with a modern soundtrack pulled from the songs of musical artists such as Santigold, Queen Latifah and Diana Gordon. There’s at least one fabulous fantasy dance number centered around Walker’s dreams of establishing a nationwide salon chain (she did, eventually) and an imaginary boxing match between Walker and Addie animates their escalating business war.

Against all odds, Walker triumphs to build a groundbreaking business that revolutionized black hair care and effected social change, opening factories and salons owned and operated by women of color, and disrupting the millionaire old boy’s club.

“Self Made: Inspired by the Life of Madam C.J. Walker” isn’t just a wonderful tribute to yet another unsung hero — it’s an engrossing and uplifting series that shines light in otherwise dark times.

Obama and Wilmore?It?s a Black Thang!