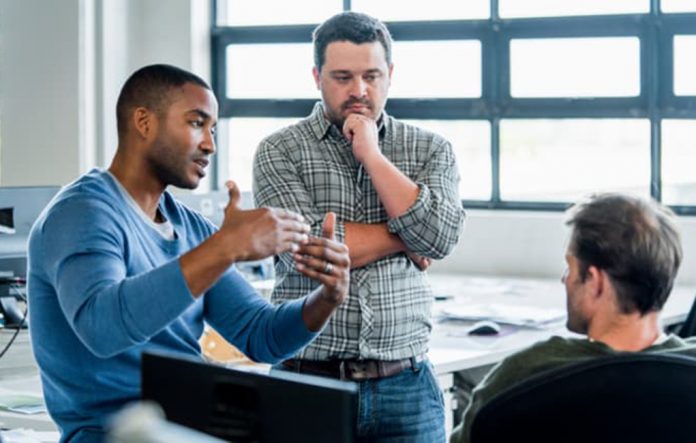 How can an employee who has always gotten great reviews ask about the next step on their career path when they are pretty sure the only way “up” is to take their supervisor’s spot?

Don’t make assumptions! That’s one important point career experts made when I asked them this question.

As Tim Toterhi, founder of Plotline Leadership, notes, managers often divide employees into three categories: A players (“rock star performers that they can’t live without”); B players (“Steady Eddie types that are essential to the business, but who aren’t lighting the world on fire”); and C players (“low performers who they’d like to donate back to the industry).

“Just because you’ve received positive reviews, don’t make the assumption that you are in the first category,” Toterhi cautions. “If your top-notch ratings came with commensurate bonuses, raises and promotions it’s a good sign. If you just earned more work, well then, not so much.”

If it ends up you are one of those “A players,” Toterhi says there are steps you can take “to help you earn the next rung on the ladder:

–Tackle the elephant. Companies with “flatter organizational structure” have started turning to what Toterhi calls “career lattices that allow employees to take lateral moves in an effort to expedite their upward run.” He suggests speaking with an HR rep and your manager to find out if there is a strategy that fits your specific situation. “If there isn’t a path forward, you have a decision to make. Assuming there is however, you’ll need to get to work with the remaining for steps,” he says.

–Know the promotion cycle. Exceptions exist, but the reality is promotions typically happen within a fixed performance management cycle. That’s why it important to know that cycle and time your request for a promotion appropriately. “Share your upward aspirations with your manager early in the year, preferably during goal-setting [discussions],” Toterhi says.

–Demonstrate value to the company. Doing a good job is one thing; showing it — with metrics, if possible — is another. “You have to prove how you are consistently contributing more than other employees in similar roles,” Toterhi says. “Give your boss quarterly, if not monthly proof points on your progress to goals and confirm plans are still aligned during formal reviews.”

–Prepare your backfill. Afraid your manager is reluctant to let you go? “Take that concern off the table by grooming your successor,” Toterhi suggests. And don’t worry about spoiling the illusion of your irreplaceability, even if the company’s financials aren’t stellar. “While a crafty boss could see your career mapping efforts as a way to replace you with a cheaper resource, most hold on to their rock stars despite the economic outlook,” he says.

Another assumption to avoid?

“Don’t assume that your supervisor wants to be there forever,” says Jennifer Brick, a career success catalyst at Capdeca Solutions.

“They likely have ambitions to move up or beyond their current role, and if that is among their aspirations they can help make you a shoo-in when they move up or on,” Brick explains. Alternate growth opportunities also may exist if you’re open to them, she adds.

“Perhaps a lateral move would support your professional growth goals, or there are more options to advance as an individual contributor in your current role,” Brick says.

If not, it might be time to move on — with your supervisor’s blessing.

Side Hustle: Direct Marketing Can Be Profitable In More Ways Than...

Looking Out for No. 1