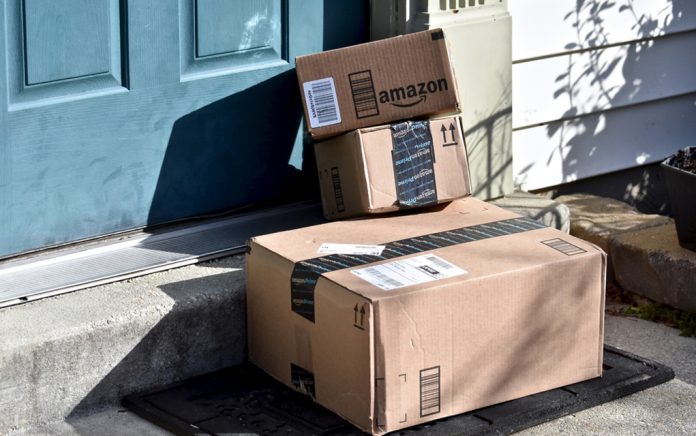 A couple of weeks before Christmas, the inside of an Amazon Robotics fulfillment center near Dallas-Fort Worth International Airport looks more industrial than anything having to do with holiday shopping.

As Amazon customers hit the “buy” button over and over again, workers, scanners and robots are set in motion across the sprawling 1-million-square-foot facility in a real-time display of software engineering.

It’s clear why the whole place takes two 15-minute breaks and a 30-minute lunch at the same time. Everything moves in synchrony.

In the weeks leading up to Christmas, the fulfillment center’s lobby is decorated with twinkle lights, red and white balloons, an inflatable snowman and a Christmas tree made with garlands and, of course, Amazon boxes. The traditional box men at the entrance of every fulfillment center are dressed up for the season like toy soldiers.

Why is it so loud? Because every conveyor belt throughout the four-level building is moving and carrying yellow plastic tubs and packages, said Amazon spokeswoman Brenda Alfred. The more tubs, the more bumping and clanking, the louder it gets.

Conveyor belts look like roller coaster tracks in a place that she said is big enough to fit 28 football fields and made up of enough steel to construct two Eiffel Towers.

Each day, employees file through subway-like grated metal turnstiles at the entrance of FTW6, the center’s given name.

A white board message congratulates the staff: “Thank you FTW6 associates for successful Black Friday and Cyber Monday at FTW6. We shipped 600K units to customers and 120K units to other Amazon buildings on both days.”

Last year, Amazon represented about 40 percent of U.S. e-commerce sales and about 6 percent of total retail sales, and it’s growing faster than most retailers. This year, it’s expected to capture almost 50 percent of U.S. online sales.

Employees stand at stations scattered across the shiny concrete factory floor. They handle arriving inventory, pick it, package it and are always scanning it. This place would never work without scanner technology.

Elizabeth Moran of Farmers Branch wears gloves on her hands and Nikes on her feet. Her hair is pulled back and up in a ponytail, that’s a safety rule. No hair longer than shoulder length allowed.

From behind, she could be in the front row of a workout step class, moving to one side, up one step, next time, two steps. Her arms move up and down as she picks and puts a toy, a frying pan, a package of party paper plates into bins. She scans each item and monitors a screen, then pushes yellow tubs out to ride along conveyor belts to the next station.

Demanding work conditions at Amazon’s fulfillment centers and similar operations are no secret. Job review posts warn of the repetitiveness of the work and being on your feet for 10 hours a day.

Asked if her job allows her to skip aerobics workouts, Moran simply smiled.

This is an Amazon Robotics warehouse for small items. No big screen TVs and trampolines here. In another online fulfillment center, she would be walking up and down aisles putting small items into a cart. Here, robots deliver the goods to Moran, who has worked at Amazon for one year.

In this Amazon fulfillment center, employees make $15 to $18.75 an hour depending on experience and up to up to $28.13 an hour for overtime. Amazon raised its minimum wage to $15 an hour effective Nov. 1 for all its facilities.

Moran fills multiple tubs and orders at once, even as a crew from The Dallas Morning News observes her in action.

She’s picking from tall, four-sided pods that arrive automatically at her station and wait in line to serve up the next item ordered by a customer. The pods are randomly filled with merchandise and made mobile by sitting on top of robots that resemble a large version of a Roomba vacuum.

Pods scurry off and wait to the side to be summoned again, either to a picking station like Moran’s or to a “stowing” station operated by Sal Ribaul, who has worked at Amazon since the center opened in March.

The yellow pods sense when they have space to be filled and line up for Ribaul. He likened his job “to playing Tetris,” a computer game that its creators say embraces a desire to make order out of chaos.

He loads a lemon zester, a fondue pot, a Star Wars toy, containers of juice, a children’s book, kids’ walkie-talkies. It all seems random. But random stowing works here. If all the lemon zesters were in one pod, it might have to travel longer to get to a picking station.

The pods slide along without crashing into one another because they’re guided by software and QR codes along the floor.

Picked merchandise in tubs are assigned a unique barcode and ride conveyors to the next stop on the main floor to a station where the order is boxed up.

Wearing an elf hat, Jeffrey Tucker scans the order. Software suggests the box size he should pull and the amount of protective packing it needs. Automatically, the proper length of tape to seal the box comes out of a dispenser. No time to talk to Tucker because it’s almost break time and there’s one more process to witness.

A small QR code on the box prompts another robot with a printer and an arm called SLAM — which stands for scan, label, apply and manifest — to create the mailing label and adhere it to the box.

Along the way, scanners are looking for mix-ups and mess-ups like an item that won’t fit in the suggested box or a label wrongly placed. Those items and boxes go to another chute where people solve the issues.

Packages ready to go are moved at hundreds of feet per minute along the center’s longest conveyor, past a scanner that reads ZIP codes. That triggers sliders to position themselves behind each box to push it just at the right moment when it’s speeding by its designated chute.

Down it goes in a spiral shaped tube that slows the box to land safely at a loading dock. It’s in front of the correct truck.

Employees inside the trucks pack boxes to maximize the space. The trucks are driven to sorting centers, Amazon facilities that are smaller than fulfillment centers and where more packages are sorted by ZIP codes onto pallets for pick up every morning by the U.S. Postal Service.

This is repeated every minute, every hour, every day in 185 fulfillment and sorting centers across 30 states. There are 10 centers in Texas.

Some cities also have Prime Now hubs. They’re located in densely populated areas where Amazon offers one-hour and two-hour delivery service. Those buildings are stocked with the most purchased items that people want fast, like diapers and phone chargers. Amazon is also filling fresh food orders from Whole Foods in 63 cities.

When employees exit the Coppell fulfillment center, they’re sort of scanned, too, as they walk through a metal detector that resembles ones used at airports.

Alfred said Amazon doesn’t want any proprietary information leaving with employees. “We have 2,000 operational processes and we’re protective of them,” she said.

And as of Wednesday, no visitors are allowed in FTW6 until after the holidays. It’s crunch time.