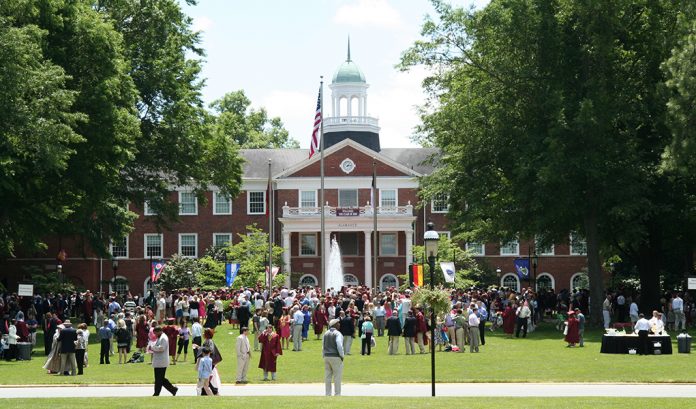 Canceled internships. Rescinded job offers. Students who graduate from college this spring, or who had lined up an internship for on-the-job training over the summer, will enter a vastly different job market than the one that existed even a few months ago — and if the downturn becomes a recession, it could have long-term impacts on their earnings, economists say.

In the face of the COVID-19 national health emergency, there’s early evidence that at least some entry-level job offers for college grads are being rescinded, and many internships are being moved online; a few are being canceled altogether.

Experts say the modern world has never had an economic downturn like this, making it difficult to predict how college students and recent graduates will fare in the wake of a pandemic-induced slowdown.

For example, if the sharp economic decline is followed by a quick and sustained recovery, “the consequences for college grads likely won’t be nearly as bad as the high unemployment rates would otherwise suggest,” said Jesse Rothstein, director of the Institute for Research on Labor and Employment at the University of California, Berkeley, by email.

“On the other hand, if we allow the economy to crawl back from the downturn, with high unemployment for many years, this could be many times worse than the Great Recession,” said Rothstein, who has studied the long-term effects of that recession and found it permanently lowered employment and earnings of recent grads, even after the economy recovered.

There is a dearth of data on how first-generation, low-income and minority college grads fared in the last recession, but experts suspect those students had a harder time getting jobs and paying college loans.

Low-income students and students of color are more likely to rely on loans to pay tuition bills, said Persis Yu, director of the National Consumer Law Center’s Borrower Assistance Project. For most spring graduates, the first loan repayments begin in November — and “the chances they’ll be on their feet by November is very slim,” Yu said.

What’s more, hiring discrimination may worsen in a time of high unemployment, when there’s so much competition for any job opening, she said. It’s an example of how disadvantage can exacerbate problems: Low-income students, especially students of color, are more likely to attend K-12 schools that don’t prepare them for college, and those who do get a degree may have a harder time paying off loans and finding jobs.

Conversely, grads from well-off families may be able to borrow from “the bank of mom and dad,” then launch a job search when the economy comes back to life, said James McCafferty and Hart Hodges, co-directors of the Center for Economic and Business Research at Western Washington University.

Young people hold a vulnerable position in the workforce because they have less tenure in their jobs and little to no experience.

To get a job, they must compete against experienced workers, said Anneliese Vance-Sherman, a labor economist with Washington’s Employment Security Department, via email. As well, young people disproportionately hold jobs in the service sector — restaurants, bars, retail, to name a few — and those industries were hardest-hit when stay-at-home orders were rolled out in late March.

For students still in college, job experience will be harder to come by this summer. And many internships will be done remotely.

In a small, ongoing poll conducted by the National Association of Colleges and Employers, 12% of employers say they’re revoking offers to summer interns; a handful of respondents said they’re also revoking offers to full-time recruits. About 30% of employers are going ahead with internship programs as planned, while others have made the internships virtual, reduced the length of the internship, or moved events online.

Microsoft and Amazon have canceled plans to bring more than 10,000 summer interns from around the world to their headquarters. They’ve shifted to virtual internships online.

Microsoft, which has hosted students for more than 30 years, said it was prepared to welcome more than 4,000 interns in what was to be its largest class in the program’s history. Instead, interns will participate remotely, connecting with each other and senior company leaders in a variety of events. Deferrals to next year’s class are being offered to students unable to participate in the remote program, the company said.

Amazon was preparing for the arrival of more than 8,000 interns, also its largest class ever, according to the company. In past years, they have packed Metro buses and swarmed Amazon’s already bustling Seattle campus. Under the new approach, the vast majority now will join in an entirely virtual experience.

Not everyone has been so lucky. Christie Zhao, a junior studying computer science and drama at the University of Washington, lost an internship she’d been offered by Nordstrom. Zhao, an international student from a small city in China, doesn’t know what she’s going to do this summer. “I’m mainly confused. I can’t just sit around the house doing nothing,” she said.

Yash Raj Sinha, a UW junior from Singapore, said in an email interview that his summer internship at a scientific instrumentation company in Waltham, Mass., was canceled.

“As the COVID situation developed I got even more excited because there was a potential to work on projects directly for pandemic research and relief,” Sinha said. “It took a lot of work to get and I was super excited about it.”

Students seek internships because there’s good evidence from national surveys that a student with internship experience is more likely to get hired than equally qualified candidates who didn’t, said Briana Randall, executive director of the UW’s Career & Internship Center.

A lost internship might not be as big a deal when everyone’s having to cope with the same issue, McCafferty said. “It’s not like you decided to go sit on the beach in the summer,” he said. “Everyone has the same loss.”

Randall has been sharing data culled from different sources suggesting that while there’s clearly a downturn in hiring, employers are still actively recruiting UW students.

A web page outlining the situation ends on a positive note: “The hiring may not be as robust as before, which I know can feel disappointing and scary, but there are some positive glimpses,” it concludes.

Randall said her office is normally inundated with students getting ready to launch job searches in April, but this year they aren’t booking virtual appointments. Perhaps there is too much uncertainty now, she said.

Many white-collar jobs, especially those in the tech sector, are “COVID-proof” because they can be done remotely, said Nicole Smith, chief economist for Georgetown University’s Center for Education & the Workforce. The pandemic is “shining a light between the huge divides that exist between white collar and blue collar workers,” she said.

Even in a downturn, one thing still holds true: A degree or credential is a good investment. “We know that workers with more postsecondary education, beyond high school, are usually in demand for jobs,” Smith said, “and they’re the ones that usually get higher wages.”

Your Dream Job out of College is a Big Snooze. Is...