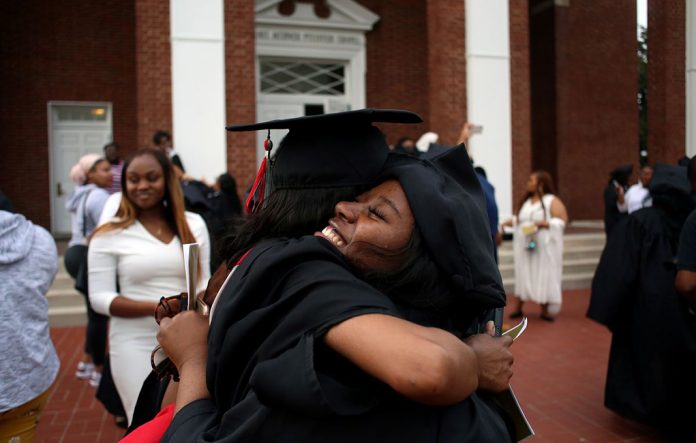 Pilar Hughes watched students crisscross the wide quad at the center of campus, remembering her first year at Bennett College.

The tiny classes. The soul food lunches served on Wednesdays. The sisterhood and the overwhelming sense of self-worth the all-women’s black college offered.

“There is so much love and community here,” the freshman said on a warm spring morning. “I’m sure the experiences here will help me in life.”

And yet, she plans to transfer.

Bennett, one of two all-women’s historically black colleges in the country, could be on the verge of closure. Years of financial woes have led recently to a federal court battle over its accreditation, without which the future of any college is dim.

Bennett’s story reflects that of many of the nation’s 102 historically black colleges and universities, or HBCUs, most of which formed after the Civil War.

In recent years, the institutions overall have seen enrollments plummet, endowments decrease and student bodies — once entirely black — become more mixed as HBCUs attempt to compete with schools that no longer shut out African Americans.

Desegregation, along with a more recent push for diverse recruits among non-HBCUs and growing incomes among black families, has made historically black colleges and universities a less common option for African Americans.

Fifty years ago, 90% of black postsecondary students attended historically black schools. In 1990, it was close to 17%. Today, around 9% do.

The nation’s oldest historically black college, Cheyney University of Pennsylvania — founded in 1837 — has fought to keep its accreditation. It’s trying to raise at least $4 million to stay afloat. Three HBCUs have closed since 2000.

Other schools, including Alabama State University, Paine College in Georgia and Elizabeth City State University in North Carolina, have battled steep enrollment declines and major financial struggles. The same issues have led more than a quarter of the nation’s historically black schools to be put under warning or on probation by accrediting groups in the last decade.

“The situation of HBCUs is precarious,” said Crystal deGregory, a professor who studies their history at Kentucky State University, a historically black college in the state capital, Frankfort. “We don’t know if we’re going to make it.”

Not all HBCUs have suffered. The most prestigious have thrived in recent years, with enrollment and endowments growing along with donations from well-known alumni.

“Everybody has heard of Howard, Spelman, Hampton, Morehouse,” said Dianne Suber, former president of tiny St. Augustine’s University in Raleigh, N.C. “But so many others are out there just existing day-to-day, check-to-check or sometimes worse.”

After their establishment, historically black colleges grew in size and influence for more than a century. Many of the oldest are private schools created by churches. Public campuses blossomed in the late 19th century. That’s when a federal law that granted land for universities also required states that barred blacks from institutions of higher education to create separate campuses to serve African Americans.

Bennett College was founded in 1873 as a coeducational institution in central North Carolina. In the 1920s, it became an all-women’s college, albeit one run by men. That changed in 1955 when Willa Beatrice Player became its president — the first black woman in the nation to lead a four-year accredited liberal arts college.

The campus is a five-minute drive from downtown Greensboro, where in 1960, four students from nearby North Carolina A&T University staged a sit-in at the whites-only Woolworth’s lunch counter. Dozens of women from Bennett joined the sit-ins, which stretched on for months and became among the best-known protests of the civil rights movement.

“There is a correlation between atmosphere, retention and success at HBCUs” compared with how black students fare at other schools, said Janelle Williams, a visiting scholar at the Penn Center for Minority Serving Institutions at the University of Pennsylvania.

One advantage that historically black college students have is that their schools tend to be small; more than half have 2,500 or fewer students.

But the size has also made financial and enrollment dips harder to manage.

In the last decade, HBCUs have increasingly recruited students who are not black, offering scholarships and touting their small class sizes and role in the fight for racial equality.

At a quarter of the schools, nonblack students make up at least 20% of enrollment today.

At Bennett, which graduated its first white student in 1960 — a civil rights activist who was part of the lunch-counter sit-in — white students make up a tiny minority.

Hughes, 19, grew up in New Jersey and had never lived outside the Northeast. After attending a mostly white high school, she wanted an all-black education.

“When else in life will you be able to be in an all-black setting working toward a common goal — getting a degree? That was a question I thought about a lot before deciding on Bennett,” she said, noting that a predominantly white institution — which is commonly referred to on campus by the acronym PWI — was never an option.

“The country is run by white people,” Hughes said. “I wanted the experience — at least for my education — to be one that is exclusively black.”

Hughes arrived in August. Four months later, as the struggles of the college became clear, she made a painful decision: She needed to transfer.

On a recent morning, the biology major dropped by the enrollment management center to get her transcripts. She plans to apply to North Carolina A&T.

“I love this campus and these people. But the issues this school faces could hurt my future. … I have to move on.”

Abigail Mosley grew up in the suburbs of Cleveland and knew from an early age that she wanted to enroll at a historically black college or university. She’d felt stunted at her predominantly white high school, especially when learning about black history.

“Everything is narrated through a white lens,” the 21-year-old said.

She earned an associate’s degree near home, and last spring started looking at four-year colleges. Mosley was admitted to Spelman — the only other women’s HBCU — but the Atlanta college didn’t offer her enough scholarship money.

While visiting colleges in North Carolina, she spent an afternoon at Bennett with her parents. They walked between the two- and three-story red brick buildings with bright white trim, where every class and dorm is within a 10-minute stroll. Knotty magnolias created patches of shade, and the calm of the small campus put her at ease.

“Immediately, I knew I wanted to attend,” Mosley said. “I can text my professors … there is investment in students from faculty.”

But Mosley recently applied and was accepted to Cleveland State University, a non-HBCU that’s closer to home.

“I have to have a backup plan,” she said. Once she gets her degree in political science, she wants start a nonprofit in Cleveland that focuses on community organizing.

“It’s all up in the air right now,” Mosley said. “It would be upsetting to see my potential alma mater no longer in existence.”