Home News Headlines Getting Used to Seeing your Doctor Virtually? Telehealth Coverage Might Not Last 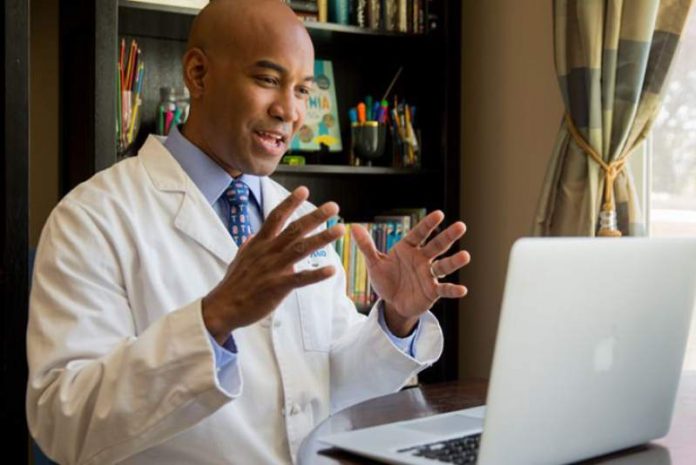 Before COVID-19 hit, Jenny Thomas had always visited her doctor in person.

But now that the Chicago resident is home more, she’s been seeing her doctor over video instead, often in her pajamas.

“It was so easy, and she was right there,” Thomas, 46, said of her doctor at Rush University System for Health. “I’ll definitely go that route again in the future.”

Like Thomas, many people are using telehealth for the first time as they try to stay physically distant to avoid spreading the novel coronavirus. State, federal and health insurance rule changes — made in response to COVID-19 — have made it easier and more financially viable for physicians to offer virtual health care.

But the future of telehealth remains uncertain because it’s unclear how such visits will be covered by insurance beyond the next few months.

It isn’t an option for every medical visit, but for certain types of appointments, like the one Thomas scheduled to renew her prescriptions, it’s become popular.

The Chicago area’s biggest hospital systems say they’ve had more than a million telehealth appointments combined since the pandemic started, and demand remains strong, even as people have started leaving their homes more in recent months. In Illinois, the percentage of primary care visits done virtually shot up from zero in February to nearly 47% in April for people on traditional Medicare.

Health care and advocacy groups say action is needed from state and federal lawmakers if widespread use of telehealth is to survive beyond the COVID-19 crisis.

“A lot of important advances have been made over the last six months, so we want it to continue,” said Danny Chun, a spokesman for the Illinois Health and Hospital Association. “The future of health care should and must include telehealth.”

Before COVID-19, most Illinois health systems weren’t offering much in the way of telehealth. Health insurance companies typically didn’t reimburse health systems and doctors the same for virtual visits as in-person ones.

“I think many providers were very interested in telehealth, but because they couldn’t be reimbursed for the service, it was a nice-to-have, not a need-to-have,” said Laura Messineo, vice president of telehealth at Amita Health, which has 19 hospitals in Illinois.

But when it became clear that social distancing was key to slowing the illness’s spread, Illinois Gov. J.B. Pritzker issued an executive order requiring health insurance companies regulated by the state to cover in-network virtual visits for patients and, in many cases, waive patients’ out-of-pocket costs. The order does not apply to self-funded plans, which are the type of insurance often offered by large employers.

The state also required it to be covered for people on Medicaid, a state- and federally funded health insurance program that serves those with low incomes and disabilities, among others.

Medicare also made it easier for seniors to take advantage of virtual care. Previously, the program had mostly covered it only in rural areas and in settings such as hospitals and nursing homes.

In addition, the federal government relaxed rules that had made offering telehealth more difficult for health systems.

The results were dramatic.

Many patients have been thrilled about the shift. Mary Patton, 84, of Peoria, Ill., appreciates the convenience of virtual appointments, given how busy she is with her church, local politics and as a volunteer lobbyist for the AARP.

“There are times you have to actually meet in person, but many times you don’t,” Patton said. “I used to just see all my doctors in person but I don’t need to now which saves me a lot of time.”

It also has allowed health systems, which were bleeding money early in the pandemic because elective surgeries were canceled, to continue seeing patients.

But the rule changes that led to the explosive growth of virtual visits in recent months aren’t permanent.

Pritzker’s order requiring insurance companies to cover telehealth was originally set to expire this summer. Pritzker has been renewing it, with the latest extension set to last through Oct. 17. He plans to continue renewing it “as the pandemic continues, and until the Illinois General Assembly passes a bill requiring telehealth coverage for private insurers,” said spokeswoman Jordan Abudayyeh in an email. A law would be needed to make the changes permanent.

In addition to uncertainty about state requirements surrounding insurance coverage, waivers issued by the federal government that made it easier for doctors to offer the services are set to expire in January.

Both have waived out-of-pocket costs for in-network telehealth visits for many members through the end of this year, although UnitedHealthcare plans to resume charging many members for non-COVID-19-related visits on Oct. 19.

UnitedHealthcare hasn’t decided whether it will continue to cover it at the same rates as in-person care beyond this year, said spokesman Anthony Marusic.

Many patients, such as 16-year-old Yalina Lopez, worry that as COVID-19 concerns fade, so will virtual medical appointments.

Lopez, of Berwyn, Ill., has Emery-Dreifuss muscular dystrophy, a condition that can affect joints, muscles and the heart. She mostly uses a wheelchair to get around, and on her tougher days, she often has to take breaks while getting dressed because it’s so draining.

Since COVID-19 started, about three-fourths of Lopez’s doctors appointments have been conducted via video.

“She would miss a full day of school for a 20- to 30-minute appointment, and now maybe she misses just one class,” Wanika Lopez said. “It’s just beautiful. I love telehealth right now.”

Lopez is among those asking Congress to help ensure virtual health services are here to stay. She recently spoke with several members of Congress about the topic as part of the Children’s Hospital Association advocacy.

Dr. Vamshi Rao, a neurologist at Lurie and one of Yalina Lopez’s doctors, said he was skeptical of telehealth before COVID-19.

But he said it’s proven invaluable as a way to continue seeing his patients, some of whom are at high risk of becoming seriously ill if they catch COVID-19.

He’s also noticed some unexpected benefits, such as being able to speak with more of his patients’ family members and seeing his patients’ homes while prescribing equipment. His young patients often seem more comfortable than when they’re sitting in exam rooms, he said.

“It’s not 100% of the exam that I really want through telehealth, but it comes pretty close,” Rao said.

He does, however, miss his in-person interactions with patients, which was one of the reasons he went into medicine.

Telehealth isn’t for everyone, or every situation.

Also, many patients — and some doctors — worry about the quality of care provided virtually.

That was the top reason some Chicago-area residents said they would not be open to telehealth in a survey conducted this summer by Chicago consulting firm West Monroe.

Research has shown that virtual health visits can improve patient outcomes when used for managing chronic diseases, including heart failure, diabetes, depression, obesity, asthma, and mental health conditions, according to an August brief from the federal Agency for Healthcare Research and Quality. When used in primary care, for non-urgent matters, the accuracy of diagnoses made over telehealth seems to be about the same as those made in person, according to the brief.

Technology also can be a barrier. Leaders of Chicago-area health systems said they so far hadn’t seen many problems with people accessing virtual appointments. Virtual care can include a simple phone call for patients who lack computers or smartphones.

LaVera Davis, 72, of North Chicago, likes the idea of virtual health visits, especially during Chicago’s icy winters when going places can be a challenge.

But during a recent appointment, she talked with one of her doctors at NorthShore over the phone. After the call, Davis thought they were done and didn’t realize she was supposed to switch to video.

Other patients, such as Hiola Alston of Chicago, simply prefer to see doctors face-to-face and expect they’ll eventually switch back to traditional visits.

Alston, 76, had a telehealth checkup in August with her doctor. “It was OK,” she said.

“I would definitely choose to go in,” Alston said. “I’d rather see you than just talk with you over the phone. It gives me a truth. I can look at your face and get a feel for your body language and feel more comfortable with it.”

Many health leaders expect demand for virtual services will decline at least a little when, and if, COVID-19 is no longer as big of a threat. They’ve already seen more of a shift back to in-person visits since Pritzker’s stay-at-home order lifted, though many patients still want telehealth.

“I can’t imagine with the number of patients who’ve had experiences with virtual visits, that that’s something our patients will want to give up,” said Tyler Bauer, NorthShore senior vice president for clinical operations.

In Illinois, a coalition of health care and consumer advocacy groups are pushing state lawmakers to permanently require Medicaid and private health insurance companies to cover it the same way they cover in-person services.

Many also are urging Congress to take action to make sure virtual health offerings remain widespread. The Trump administration has already proposed a permanent expansion of some telehealth services for Medicare beneficiaries.