PARIS (Reuters) – Ditching the euro to return to the franc would harm the purchasing power of the French, President Francois Hollande and central bank governor Francois Villeroy de Galhau said on Saturday, in tacit warnings against the National Front.

Opinion polls show the anti-EU, anti-immigrant National Front (FN) leader Marine Le Pen qualifying for the April 23 first round of the presidential election but losing the May 7 run-off to centrist Emmanuel Macron.

Leaving the euro is one of Le Pen’s trademark policies, both a marker of her anti-establishment stance that attracts voters angry with globalisation, and an obstacle to her quest for power in a country where a majority oppose a return to the franc.

“Some (candidates) want to leave Europe. Let them prove to the French people we’d be better on our own!” Hollande told reporters in Rome on the margins of an event to celebrate the 60th anniversary of the European Union’s founding treaty.

“They can’t prove it because … a return to a national currency would trigger devaluations and a loss in purchasing power, closing borders would trigger job losses,” he said, according to a transcript of his comments provided by his office.

Surveys consistently show that French voters, in particular the elderly, overwhelmingly want France to stay in the euro, despite their scepticism over the European Union.

Some 72 percent of French voters oppose a return to the franc, an Ifop poll published in Le Figaro daily showed.

But there is a sharp gap between voters as a whole and those who plan to vote for Le Pen in the first round of the presidential election. Some 67 percent of Le Pen voters back ditching the euro, the Ifop survey showed.

Speaking on the same theme as Hollande, European Central Bank policymaker Francois Villeroy de Galhau warned against a euro exit in an interview published on Saturday.

“Exiting the euro and devaluing our currency by 20 percent would mean that the cost of imported goods would increase by the same amount,” he told the Ouest France newspaper.

Euro membership has allowed France to benefit from lower borrowing costs, leading to savings of 30-60 billion euros per year, Villeroy said, adding that ditching the currency would mean giving up those savings.

Neither Villeroy nor Hollande mentioned Le Pen by name, but she is the only top candidate clearly calling for a euro exit. Left-wing firebrand Jean-Luc Melenchon, who stands fourth in opinion polls, far behind Macron and Le Pen, calls for a complete overhaul of the EU and euro zone rules but foresees a euro exit only if renegotiation talks fail.

Le Pen has said she would seek to renegotiate France’s EU membership with the aim of returning to the franc and cutting back the bloc to a loose cooperative of nations. She would put the outcome of the talks to a referendum.

Opinion polls see her qualifying for the two-way election run-off but losing it to the centrist, pro-EU Emmanuel Macron. But there are many undecided voters, making the outcome of the election unpredictable. 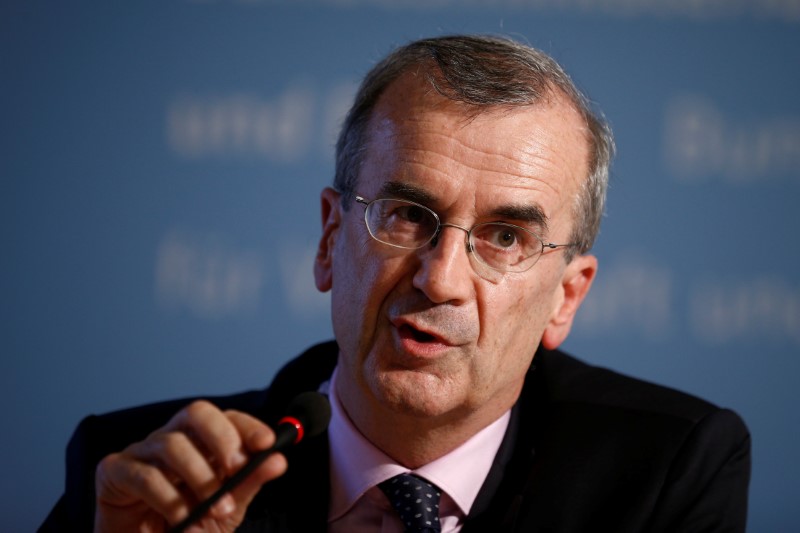