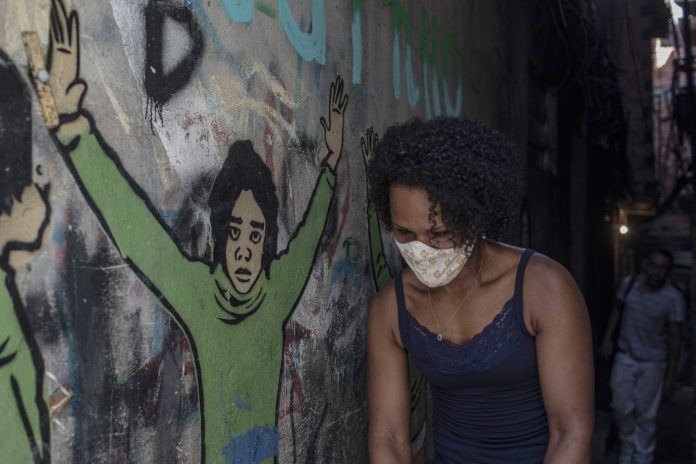 One country largely untouched by anti-racism protests so far has been Brazil, a striking fact for a society so scarred by the history of slavery and economically divided along race lines.

Black men are murdered more than three times as often as white men in Brazil while in Rio de Janeiro, the country’s second-biggest city, three-quarters of the people killed by police in 2019 were Black or mixed-race, according to national and city data. But even in a nation where street protests are a regular Sunday afternoon affair, the echo of George Floyd’s death in the U.S. has remained fairly contained. No statues have been pulled down, no national revolt.

One reason for this is that the coronavirus pandemic is forcing Black Brazilians to focus on day-to-day survival. Not only are they more likely to die from the virus, which has already infected more than 1 million Brazilians, but they will also bear the brunt of the recession that it’s sparking. While in other parts of the world that may fuel unrest, in Brazil it adds to the sense of hopelessness that has historically silenced the weakest members of its society.

“Among Black and poor people, most of the organizing energy is focused on distributing basic needs and on surviving the pandemic and the economic crisis,” said Thiago Amparo, a professor at Fundacao Getulio Vargas in Sao Paulo.

Other reasons discouraging protests, according to Amparo, include structural racism that perpetuates inequalities, little solidarity from middle and upper classes that resist joining such demonstrations, as well as a normalization of violence and lack of institutional support among civil society organizations.

Approximately 116 million Brazilians identify as Black or mixed race, or 56% of the population. As the pandemic that started among the rich spreads across all levels of income and Brazil trails only the U.S. in number of deaths, Black Brazilians represent just over half of the confirmed cases. But, because of preexisting vulnerabilities and inequalities in public health access, they amount for 61% of the deaths, according to June 24 figures released by the health ministry.

As in other parts of the world, Black people in Brazil trail their white counterparts on almost all indexes. On average, Black and mixed-race people earn 57% of what white people do. While on Thursday President Jair Bolsonaro named his first Black cabinet member, they are virtually excluded from positions of power in the economy and government, and more likely to live in situations that are disproportionately impacted by COVID-19.

In the country’s hundreds of favelas, or shantytowns, many people might share the same room, and thanks to open sewage and poorly equipped health clinics, sanitary conditions are far from adequate. Without much government assistance or savings, many can’t afford to not work during the lockdowns, riding crowded buses for hours each day, frustrating local quarantine efforts.

As a result, the disease is proving much deadlier in those communities. The fatality rate in Rio de Janeiro’s favelas is 22%, according to NGO Voz das Comunidades. That’s more than five times the national average. Public hospitals, which have only a fourth the number of intensive care unit beds as private hospitals, were quickly overrun in some cities, leaving Brazilians of color who make up 67% of the patients without assistance.

The pandemic has also wreaked havoc on the economy: industrial production and retail sales posted record crashes, and the International Monetary Fund estimates gross domestic product will contract 9.1% this year.

The fallout is expected to hit Black communities especially hard.

“Racism makes it harder for Black people to get jobs and the income tends to be lower,” said economics professor Glauber Silveira of the Brazilian Institute of Capital Markets. “In times of economic turmoil, these people are more vulnerable and tend to have a more significant loss of income and a higher unemployment rate than other groups.”

On top of earning less than their white peers do, Black and mixed-race Brazilians only count as one third of those in managerial positions. While Black people are 51% of the business owners, they tend to work in less profitable sectors, like retail and services, says Andrea Franco, a researcher in racial relations at the Federal University of Paraiba.

“We already had a very precarious labor market, now it tends to only get worse,” Franco said.

Inequality in Brazil’s labor market is attributed to poorer basic education, a smaller network of business contacts, and other factors. But Amparo says the research shows that around a third of the inequalities have no explanation, “meaning it can be directly linked to structural racism.”

The structural racism, Franco says, also shows up on violence numbers. Data from the NGO Brazil’s Public Security Forum show that last year alone, of the 5,804 people killed by police, 75% were black or mixed.

“In the U.S. you see white people being more empathic to the violence suffered by Black people than in Brazil,” Franco said. “I just wish that Black people’s struggles in Brazil are not forgotten once the effects of the pandemic are over.”