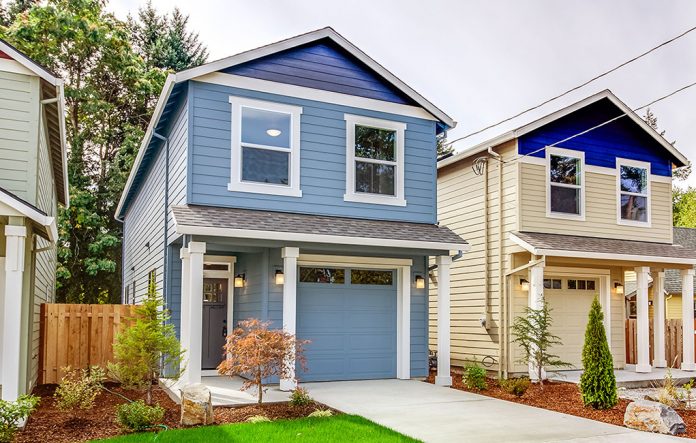 Economic gurus got one part of the mortgage forecast for 2019 correct. We’re certainly seeing a volatile year for rates.

What they didn’t see coming: Mortgage rates tumbled in March, the biggest one-week fall in a decade.

Now — instead of seeing mortgage rates edge closer to 5.25 percent as some had predicted we’d see in 2019 — we’re looking at an average 30-year rate near 4 percent.

The rate drop comes just in time for the spring home-buying season and will make monthly payments less expensive.

“This drop in rates is going to give the housing market a boost,” said Bill Banfield, executive vice president of capital markets for Quicken Loans.

“It could help to make people come back into the market and consider buying a home.”

Mortgage rates have fallen by a full percentage point since late 2018.

Going back four months or so, most forecasts weren’t expecting mortgage rates to drop as low as 4 percent for borrowers, Banfield said.

“This is a surprise to a lot of people,” Banfield said.

By contrast, the average mortgage rate was 5.1 percent as recently as mid-November, which was a 7 1/2-year high, according to Bankrate.com. The average was hovering around 4.75 percent as 2018 drew to a close.

We’re talking about some real money here for home buyers.

Take a $200,000 mortgage. The mortgage payment for principal and interest would drop by about $120 a month if your rate is 4.1 percent instead of 5.1 percent on a 30-year mortgage, according to Greg McBride, chief financial analyst for Bankrate.com.

For the mortgage alone, the payment would be about $966 month at the 4.1 percent rate. It’s sort of like getting more than one month free each year.

For a home buyer who was priced out of the market last spring, the lower rates could help get them back in the game.

Being able to lock in a 30-year fixed rate near, or even below, 4 percent helps put some “wind in the sails of home buyers from an affordability standpoint,” McBride said.

“This is a very attractive rate, which will lift the key spring home selling season,” said Mark Zandi, chief economist for Moody’s Analytics.

To be sure, many younger consumers cannot afford some of the homes on the market now as prices keep going up in some markets.

For sale signs aren’t flooding the landscape so the lack of available homes remains a problem. In some cases, too many buyers continue to be chasing too few sellers.

Lower interest rates would make payments more affordable and offset some high prices. But the drop in mortgage rates won’t solve all problems.

“It is not going to take a first time buyer from a small home to a big home, but it does definitely have a small effect on purchasing power,” said Tim Gilson, associate broker for Keller Williams Domain and the Gilson Home Group in Birmingham, Mich.

But given the competitive nature for some well-priced homes, Gilson said younger buyers may still want to consider the benefits of having a good down payment.

“Cash on hand is the element that will put a buyer in a better position,” he said.

Here are some points to consider if you’re shopping for a mortgage.

“Virtually all banks (and some non-banks) have some form of first-time home buyer programs,” said Keith Gumbinger, vice president for HSH.com.

You might be able to get some sort of subsidy on a down payment, perhaps a reduction on closing costs. Or maybe some lenders offer a mortgage to first-home buyers through a relaxed credit score or some more wiggle room relating to how much debt you’re carrying relative to your income.

Quicken Loans, for example, notes that you may be able to qualify with a median FICO score of 580 or higher for a Federal Housing Administration loan to get a home or to refinance an existing loan.

Gumbinger said an FHA loan is a favorite of first-time home buyers, as the U.S. Department of Housing and Urban Development does not use risk-based pricing.

In some cases, first-time buyers can find programs that offer a mortgage with down payments for 3 percent or 3.5 percent of the purchase price.

“Some of these changes reflect the reality that first-time home buyers find it challenging to find an attractively priced home. A smaller down payment can mean a larger mortgage and higher monthly payments.

“Many of these programs look to soften that impact,” Gumbinger said.

Flagstar Bank, one of the nation’s largest mortgage lenders, rolled out its Destination Home product in March, which offers the option for a zero-down, 30-year fixed mortgage to consumers who have credit scores of 600 or higher and meet other criteria. There’s no private mortgage insurance involved.

The maximum loan amount varies by state. The rate on the Destination Home product will vary based on the market. On Tuesday, the annual percentage rate was 4.756 percent.

Flagstar also has a gift program that offers up to $2,500 in certain markets. That gift program can help a buyer overcome the hurdle of a down payment or closing costs, depending on the loan product and other factors.

It makes sense to shop around and talk to different lenders about the mortgage options that might be available to you.

Look into options for locking in a low rate, too, in case interest rates shoot up unexpectedly. A variety of options exist.

Quicken Loans has a RateShield product where someone can lock their rate for up to 90 days. If rates dip by the time they commit to a home, the shopper would get that new lower rate.

Unlike some other rate locks, Quicken said a purchase agreement is not needed to lock a rate with RateShield so consumers can shop with more certainty.

The Federal Housing Administration is toughening up its standards for mortgages made to home buyers with small down payments, low credit scores and high levels of debt.

More than 28 percent of mortgage approvals made in the first quarter of 2019 had a credit score of less than 640.

Lenders expect that there will be some tightening of credit, particularly for buyers at the margin who may be taking on riskier loans.

Nearly 83 percent of FHA home-purchase loans made in January went to first-time home buyers, according to FHA. Just under 40 percent went to minorities.

The tighter standards would impact those who have the weakest financial profiles — FICO scores under 640 with debt-to-income ratios above 50 percent.

Gumbinger noted that loans with the lowest credit scores tend to default at a much higher rate. He said lenders are afraid that if they issue too many loans that later fail, HUD will no longer allow them to write FHA-backed mortgages.

“The FHA change does mean greater scrutiny,” he said, noting that higher-risk applications would go through a manual underwriting process.

“It’s fair to say that some buyers won’t be able to get a loan until their financial profile improves a bit,” he said.

To be fair, a low credit score and high levels of debt going in significantly increases the risk of a loan failure. Consumers don’t want to end up dealing with the “emotionally difficult loss-of-home foreclosure process” either, he said.

“Better to wait and try again at a later time to help improve the odds of success,” Gumbinger said.

The financial crisis — and housing market crash in 2008 — led to greater disclosures for consumers and more scrutiny.

“While there are a number of low-down payment, and even some no-down payment, loan options in the marketplace,” McBride said, “do not confuse this with the wild, wild west days of 2004-2006 when exotic and creative mortgage products got mainstream home buyers into trouble.”

— Step back and do more research

If your budget is tight or your credit isn’t great, it may be best to start out talking with a HUD-approved housing counselor. See www.hud.gov.

Beth Martinez, who works on financial and home ownership education for the Michigan State University Extension in Detroit, said a HUD housing counselor can help a consumer improve a credit score over time by identifying trouble spots. There may be ways to spot errors and figure out ways to reduce or eliminate outstanding debt.

“It can take from a few months to two years to improve a credit score,” she said.

But it could help many entry-level buyers and others get a mortgage.

“Improving a credit score improves the chances of being approved for a mortgage loan and can lower the interest rate that the consumer qualifies for,” Martinez said.

Housing is Hot with the Economy in the Deep Freeze