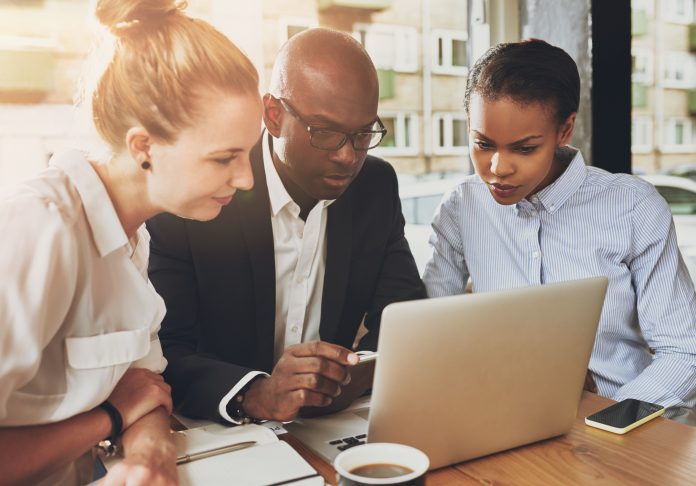 Data is beginning to show that communities historically cut off from banking and investing are using financial technology to increase access. Now, industry leaders are calling for more diverse perspectives in top leadership roles to help drive that progress.

Companies say they’re working on ways to make it happen.

Change Machine, a New York-based nonprofit that helps social services professionals recommend fintech products to their underbanked clients, committed this year to a target that 40 percent of its recommendation list will be products developed by minority-led fintechs.

“We think that fintech companies could similarly advance equity in their work by aggressively investing in products developed and led by members of those communities that stand to benefit the most,” Mae Watson Grote, Change Machine’s founder and CEO, said in an email to CQ Roll Call.

The group was founded in 2005 as The Financial Clinic to promote financial inclusion, but it rebranded to Change Machine when it developed the idea to rate and give feedback on fintech options for lower-income consumers.

The call for diversity in leadership comes as data shows that fintech users are now about evenly spread across racial groups. Fifty-six percent of whites, 59 percent of Blacks and 62 percent of Hispanics reported use of at least some digital financial tools in a survey conducted by The Harris Poll and commissioned by fintech company Plaid Inc.Plaid, which is being purchased by Visa Inc., allows people to connect their bank accounts to apps.

Asian Americans had the highest rate of fintech use, at 70 percent, according to the survey released last month.

John Pitts, head of policy at Plaid, said the company is working to close the gaps by internally amplifying diverse and inclusive perspectives in top leadership positions.

“There is a real diversity problem in financial services,” Pitts told CQ Roll Call in an interview. “If you are building tools to close that access gap, you need people who understand those communities to be at the base layer of building that.”

Many other fintechs are working to staff upper echelons of management and product development with minorities and women. Kate Goldman, who tracks fintech for the Milken Institute, a Washington, D.C.-based, nonpartisan think tank, encouraged this inclusion movement.

“Overall, promoting an inclusive work culture strengthens a company from the inside out,” she said. Goldman also highlighted the potential of fintech to improve financial inclusion and overcome historical disenfranchisement for many Americans.

Change Machine’s Grote appeared virtually at DC Fintech Week last month, presenting her paper that cited banking regulators and a 2016 study by the National Community Reinvestment Coalition, or NCRC, that investigated lasting impacts from a legacy of discrimination and deprived access.

The 2016 study looked at mortgage lending patterns in St. Louis, Milwaukee and Minneapolis and observed compounding effects of systemic discrimination in banking and finance. It documented zones of largely unbanked and underbanked populations coupled with low rates of mortgage originations that were correlated with predominantly Black neighborhoods.

Redlining, the practice of banks closing off access to financial services in certain neighborhoods because of the racial makeup, persisted both legally and unofficially for decades in the U.S. and forced many minority Americans into costly credit options such as short-term payday loans.

“Isolation from financial services impacts the ability of majority African American neighborhoods to build wealth, concentrating poverty,” the NCRC study said. “This perpetuates a cycle of disinvestment, reinforcing the likelihood that lenders will not invest there.”

In a separate study, the Federal Reserve found in 2018 that 22 percent of Americans were either unbanked or underbanked, and 40 percent of that group used fintech as an alternative.

Pitts said technology can help reverse these long-standing problems. Algorithms aren’t programmed to account for race, so digital lending tools are at least theoretically more objective on creditworthiness than a human loan officer in some cases, he said.

Algorithms, though, may be susceptible to discriminating by proxy, when programmers unknowingly substitute some other factor for race. Putting diverse workers into the entire process, including as programmers, could put more focus on eliminating these so-called race proxies.

But Pitts also pointed out that there is much work left to achieve equity, citing evidence even from this year in pandemic relief laws like the one that established the Paycheck Protection Program. While Congress earmarked $60 billion in a relief law specifically for lenders that serve minority-owned and other underserved businesses, many such borrowers were effectively shut out of the program because they lacked banking relationships, which hampered loan approvals.

Fintech lenders were also approved to participate as PPP lenders alongside traditional banks, but that option wasn’t available in initial tranches of funding.

Gender disparityPlaid’s survey also revealed a gender disparity among fintech users, with 52 percent of female respondents reporting use of some form of digital financial application, compared with 65 percent of men.

“Fintech’s triumphs for ‘social good’ do not nullify the gender gap that exists within the industry,” Goldman said in an email. “With more women than ever studying [science, technology, engineering and mathematics] and entering the workforce, there is ample opportunity to foster diverse representation in fintech companies.”

Change Machine’s focus is centered on financially uplifting minority women as well, Grote said. “We know that Black and brown women have been grossly underrepresented in fintech, and our hypothesis is that products developed and led by these groups will better support our community of practice,” she said.

Cannabis Capital Group to Help Healthcare Professionals and Others Invest in...