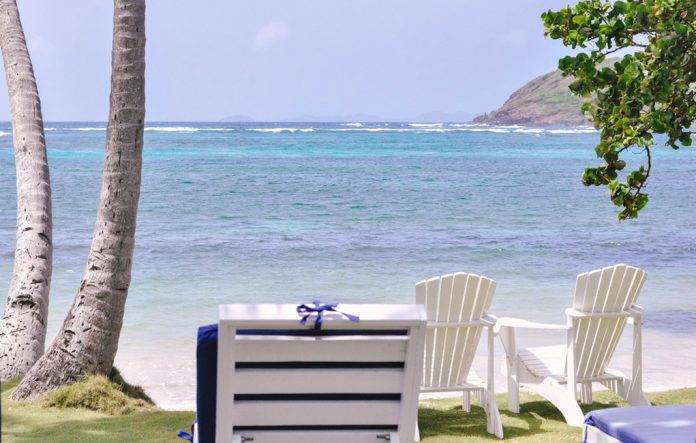 “You’re going to Bequia?” friends had asked, “to write about it?” The implication being, they’d hoped to keep their vacation paradise in the Caribbean a secret. I, with a slight sense of guilt, was flying there to, well, “out” their idyll.

Bequia, from the air, gleams like an emerald drop in the variegated blue and green necklace of the remote archipelago Saint Vincent and Grenadines. All seven square miles of it is home to 5,000 people of African, Scottish and Island Carib descent. It’s off the beaten track just enough to stave off hordes of tourists, but idyllic enough to beckon adventurous spirits.

Enter Bengt Mortstedt, the jovial Swedish-born former lawyer, and self-proclaimed “accidental hotelier.” In the early 1990s he and his family were beguiled by Bequia while on a sailing vacation through the Grenadines. “It was unspoiled, a rugged beauty,” he said. While walking the milelong Friendship Beach, a few years later, he spotted a For Sale sign in front of an old, closed B&B. The rest is history. On New Year’s Eve 2009 his creation, the Bequia Beach Hotel, was born on nine acres fronting the sea.

The luxury hotel is refreshingly unpretentious: a modern take on colonial Caribbean architecture, known for its playful colors and relaxed charm. Mortstedt’s model for the hotel riffs on the ‘50s, imbuing the property with the nostalgia of seaside resorts of yesteryear. If a picture is worth a thousand words, then the collection of retro-style travel posters created by California’s Kerne Erickson, placed throughout the property, speaks volumes on the realization of Mortstedt’s vision.

Each of the 58 guest rooms, suites and private villas displays its own personality while they’re united in designs that include four-poster beds cocooned in white voile canopies, vintage rattan furniture, contemporary bathrooms and spacious terraces. The panoramic view from my 700-square-foot Beachfront Suite embraced the beach: palms and thatched umbrellas anchored in the sand, while the island of Mustique rested on the horizon.

Interconnecting paths meander around gardens flush with flowers, shrubs and old growth trees tended by Matthew, master gardener. On Wednesdays, guests can follow him and his green thumbs on a horticulture tour. A section of the garden slopes up a hillside where one of the property’s three restaurants, Blue Tropic, serves Italian food. Further up the hill is perched a selection of varied accommodations whose views are spectacular. The largest of these is the 4,860-square-foot Estate Villa replete with its own kitchen, infinity pool, two master bedrooms and two twin bedrooms. A butler and a chef at your service, if you please.

A second infinity pool, hillside, is available for all hotel guests, but each morning at 7, I chose to swim in the spacious pool a stone’s throw from the beach. The first morning it rained cats and dogs but the pool water was warm and I was willing. Within minutes the sun emerged revealing a rainbow arching over the hills. Perfection.

Mortstedt and his son, Philip, have extended their reach to another area of Bequia, Princess Margaret Beach, where Jack’s Beach Bar draws customers to curated cocktails and seafood well suited to any princess and her prince. While I lunched on fresh fish and Grenadine greens, kids and adults alike frolicked in the sea below.

The nine-seater Bequia Air VIP Transfer that flew me from Barbados to Bequia is owned by the hotel, so too the Star of the Sea, a luxury 114-foot yacht that guests can rent for private charters along the Grenadines highway of islands. One sunny morning, I joined a group on board and cruised serenely along the Tobago Cays. Near our yacht, a pod of orcas breached in unison until out of view. We snorkeled and swam with the turtles on a tiny Robinson Caruso-like island The yacht staff produced a sumptuous lunch and plied us with unlimited drinks as we wended our way back home into the sunset.

In no small measure, part of the comfort and charm of Bequia Beach Hotel is due to the 240-member staff. Their genuine caring is a gift to each guest. Most come from the island, some from neighboring shores and others from farther away, including five chefs who trained in Europe. After spending a couple of days exploring Bequia, I discovered that almost every member of the staff is a friend or a relative of almost everyone else on the entire island.

That observation came by way of a friend who has lived on the island for many years. Walking through the bustling town of Port Elizabeth, with its fruit vendors, souvenir shops and arts and crafts kiosks was remarkable. Not a minute would go by when she wasn’t hugging someone, or another was offering her a new recipe or inviting her to a party. She’d introduce me and mention the Bequia Beach Hotel and immediately the response would be, “Oh, my cousin” so and so or “My brother” so and so works there. Driving up and down the hills of the narrow roads we’d encounter sheep, goats, chickens and tortoises, malnourished dogs, and again, her pals. This time the cars would casually stop in the middle of the road for a chat session. Relaxed has taken on a new meaning here.

We walked the Boardwalk in Admiralty Harbour, where the ice-cream parlor was at full scoop, and white sail boats bobbed in the bay. Climbed high in the hills to the more residential area of Mount Pleasant where the views are nothing short of spectacular. Coming back down to sea level, Lower Bay offers a popular beach where grabbing a fresh tuna sandwich, a cold beer and a plunge in the waves at Da Reef Restaurant and Bar is a Bequia ritual. Nearby is Dawn’s, where at sundown we ate at the tiny restaurant owned by a petite woman named, not surprisingly, Dawn. Her smile and home-cooked food were equally enticing.

Despite expensive expat villas dotting the landscape, Bequia is by no means a wealthy island: hand-to-mouth existence for many. Whaling was an industry for years, with the Whaling Museum being a testament to that practice. Unfortunately it is still allowed, but is carefully controlled.

New enterprises are offering means of employment for the Vincentians, as citizens of Bequia are called. I met two young people in Port Elizabeth who are determined to help individuals learn new skills and nurture latent talents. Jessica Jaja is the manager of Bequia Threadworks, which offers free training in sewing, textiles and fashion design. Its aim is to create a stable economy sourcing sustainable materials. The store on Back Street sells clothes that are made onsite. Off the main drag of Port Elizabeth and behind the local bookstore is The Hub Collective run by Colin Peters. With similar purpose as Threadworks, the Hub, also a non-profit organization, provides creative, entrepreneurial and self-development opportunities for all ages. Their gallery sells original, handmade crafts and art.

Back at the Bequia Beach Hotel, for my last evening, I sipped a cocktail at the open-air bar, dined on lobster with a family from Surrey, England, and listened to a band of local musicians perform late into the night. There’s magic on the island, strangers become friends, Bequia’s breezes burn into your memory and tourists will continue to come. Sorry, friends at home, I can’t keep Bequia your secret anymore.

Your Passport Application Might Not Take So Long After All