Home Economy Factbox: Impact on banks from Britain’s vote to leave the EU

(Reuters) – Global banks have warned they could move thousands of jobs out of Britain to prepare for the expected disruption caused by the country’s exit from the European Union, endangering London’s status as a major financial center.

Leading financial firms warned for months before last June’s Brexit referendum that they would have to move some jobs if the “Leave” side won, and have been working on plans for how they would do so for the past six months.

More details are starting to emerge after Prime Minister Theresa May confirmed Britain would leave the European single market, ending banks’ hopes they might retain “passporting” rights that let them sell their services across the EU out of their London hubs.

Stuart Gulliver, CEO of HSBC <HSBA.L>, Europe’s biggest bank, said it would relocate staff responsible for generating around a fifth of its UK-based trading revenue, or around 1,000 people, to Paris.

Barclays <BARC.L> Chief Executive Jes Staley told BBC Radio in an interview in Davos that the bank would keep the bulk of its activities in Britain after the UK leaves the EU, and said any changes to how the bank operates will be small and manageable.

However, Barclays is preparing to make Dublin its EU headquarters for when Britain quits the EU, according to a source familiar with the matter.

Swiss bank UBS’s <UBSG.S> Chairman Axel Weber said at the World Economic Forum in Davos in January that about 1,000 of its 5,000 employees in London could be affected by Brexit.

Separately, Chief Executive Sergio Ermotti said that UBS has a degree of flexibility if its UK outpost looks set to lose its ability to operate across the EU once Britain leaves the bloc.

The world’s biggest wealth manager has also set up a bank in Frankfurt to consolidate most of its European wealth management operations, after the Brexit vote dashed London’s chances of being the host city.

Credit Suisse’s <CSGN.S> Chief Executive Tidjane Thiam said in September that his bank was relatively well placed to deal with the impact of Brexit and that only around 15-20 percent of volumes in the investment bank would be impacted.

Lloyds Banking Group <LLOY.L>, Britain’s largest mortgage lender and the only major British retail bank without a subsidiary in another EU country, is close to selecting Berlin as a European base to secure market access to the EU after Britain withdraws.[nL8N1FY5HM]

U.S. bank Goldman Sachs <GS.N> is considering moving up to 1,000 staff from London to Frankfurt because of concerns over Brexit, Germany’s Handelsblatt newspaper reported in January, citing financial sources.

Goldman Sachs will begin moving hundreds of people out of London before any Brexit deal is struck as part of its contingency plans, the Wall Street firm’s Europe CEO said in March.

Three people familiar with the matter told Reuters in November that Goldman Sachs is considering shifting some of its assets and operations from London to Frankfurt.

U.S. bank Morgan Stanley <MS.N> has identified many of the roles that will need to be moved from Britain after Brexit, sources involved in the processes told Reuters.

Morgan Stanley, which bases the bulk of its European staff in Britain, will have to move up to 1,000 jobs in sales and trading, risk management, legal and compliance, as well as slimming the back office in favor of locations overseas, one source told Reuters.

Morgan Stanley may initially shift 300 staff from Britain following its exit from the European Union, and is scouting for office space in Frankfurt and Dublin, Bloomberg News reported in February.

Citigroup <C.N>, which has also identified roles that will need to be moved out of the UK and has a large banking unit in Dublin, will need to move 100 posts in its sales and trading business, sources with knowledge of the matter said.

Separately, Citigroup’s European chief said the U.S. bank would make a decision on its Brexit contingency plans in the first half of the year and choose from a number of potential EU countries to relocate some investment banking business.

Chase & Co <JPM.N> could be forced to move 4,000 of its 16,000 staff currently based in Britain if the country loses access to the single market, bank CEO Jamie Dimon warned in June.

“It looks like there will be more job movement than we hoped for,” Dimon told Bloomberg TV in an interview at the World Economic Forum in Davos in January.

Bank of America Corp <BAC.N> said in August that its businesses and results could be adversely affected and it may have to incur additional costs if Brexit limits the ability of its UK entities to conduct business in the EU.

Dublin is Bank of America’s default option for a new base within the EU, but other centers are on the table and no decision has yet been made, an executive said in Germany on March 14. 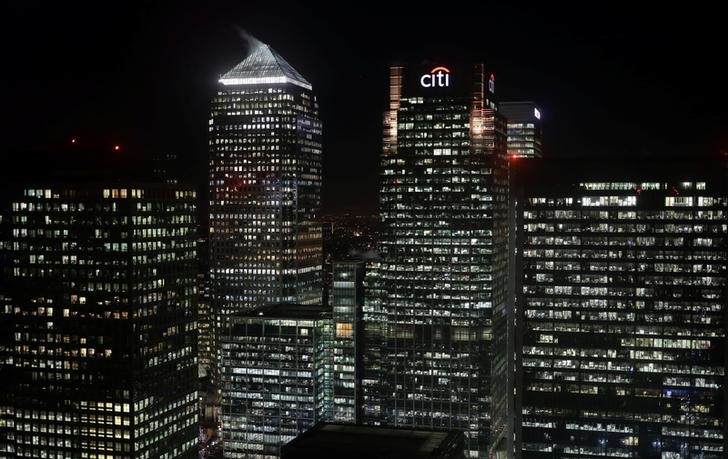