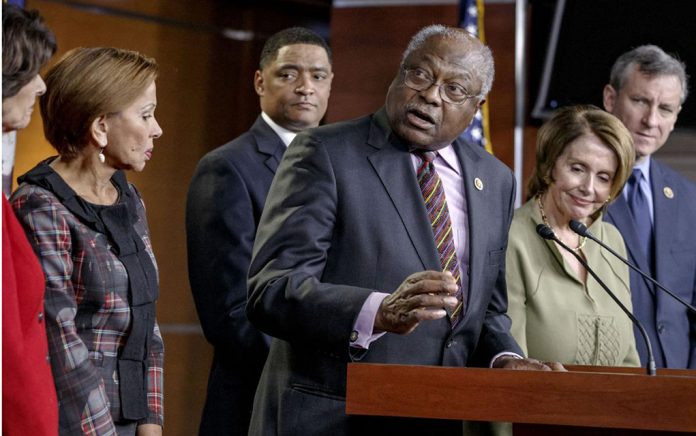 It may not be the “blue tsunami” Democratic activists had been seeking, but the party’s victories in House races across the country Tuesday night are enough to block President Donald Trump’s agenda for the next two years — and sweep San Francisco Democrat Nancy Pelosi back into the speaker’s office.

Fueled by anti-Trump energy, Democrats won Republican seats in suburban areas across the country — from Charlotte, N.C., to Kansas City, Mo., and Denver. That gives the party a solid grasp on the House chamber, where the rules give the majority party significant power to control the agenda.

A Democratic-controlled House is unlikely to be able to see much of its legislation become law.

But it could effectively stymie the president’s efforts to fund his wall on the border with Mexico, unravel the Affordable Care Act and make cuts to entitlement programs like Medicaid and Social Security. As the chamber’s majority, Democrats would also gain subpoena power to investigate Trump’s ties to Russia and his administration’s ethics scandals.

The results also offer validation to Pelosi, the 78-year-old party leader who became the face of Republicans’ opposition campaign this fall and the subject of angst among some in her own caucus.

Republican groups spent millions of dollars on ads seeking to tie Democratic challengers to Pelosi and what the GOP called her “liberal San Francisco values.”

The Democrats’ victories are likely to dampen any push to oust Pelosi and other top leaders, a half-dozen Democratic congressional aides told McClatchy. House Democrats plan to vote on leadership positions after Thanksgiving. The party’s nominee will then go before the entire House for a vote in January.

The veteran congresswoman has faced relentless criticism from Democrats in some quarters, particularly from younger party lawmakers who argue she has held onto power for too long as well as from more centrist Democrats running in swing districts in 2018.

A recent Washington Post tally found that roughly one-third of non-incumbent Democrats running for House seats this year “refused to endorse Pelosi or have sidestepped questions about her.”

But as the scope of Democrats’ victory became apparent, even her detractors conceded that it would be difficult to oust her.

If Pelosi returns, her deputy, 79-year-old Minority Whip Steny Hoyer of Maryland and the third ranking House Democrat, 78-year-old assistant minority leader Jim Clyburn of South Carolina, are also expected to remain the second and third leadership slots, although some members of the Congressional Black Caucus are eager to have Clyburn or another African-American in one of the top two positions.

Pelosi has sought to calm the demands for change at the top of the party with recent promises to serve as a “transitional” speaker in the new Congress, helping to groom a new generation of Democratic leaders before stepping aside.

Democrats will have a lot of new members next year. From liberal icons such as Alexandra Ocasio-Cortez of New York to centrists like Conor Lamb in Pennsylvania, the incoming class represents a wide range of viewpoints, backgrounds and ethnicities. A historic number are women.

The challenge for Pelosi and fellow party leaders will be keeping such a diverse mix of lawmakers lined up behind their agenda, particularly regarding Trump.

Pelosi and other senior House Democrats have already made clear they do not want to focus on attacking Republicans personally.

Instead, they are intent on moving a legislative agenda they hope will demonstrate they are working to solve some of the voters’ most pressing issues, including expanding economic opportunity, controlling health care costs and reining in government corruption.

Democrats do intend to conduct oversight of the Trump administration. The House Intelligence Committee is likely to resurrect the investigation into Russian meddling in the 2016 election, and how much the Trump campaign knew about it, a probe Republicans terminated earlier this year.

The Democrat-led Oversight and Government Reform Committee is likely to examine the president’s finances, both before and since being elected, including how much he has paid in taxes, the behavior of his charities and whether he has illegally profited from his current office.

The tension is most likely to come from how far to push those investigations and whether the Democrats should seek to force out Trump and/or members of his administration.

A vocal bloc of House Democrats, and certainly the party’s influential liberal base, wants Democrats to use the new subpoena power that comes with the House majority to launch a full-scale political assault on the White House, including impeachment of the president.

“We will certainly honor our responsibilities for oversight of the executive branch,” Pelosi said on “PBS NewsHour” Tuesday night. But she said any move to impeach the president would “have to be bipartisan and the evidence would have to be so conclusive.”

Liberal groups, meanwhile, called for “boldness” from Democrats, both in pushing back against the president and in pursuing ambitious policies. “There is no time for small-bore technocratic thinking,” Adam Green, co-founder of the advocacy group Progressive Change Campaign Committee, said in a statement.

Those competing visions will test House Democrats the same way the divisions among House Republicans made it difficult for party leaders to advance major policy items, despite their majorities in Congress.

Democrats will also have trouble finding common ground with the Senate, where Republicans maintained their majority on Tuesday night.

And they will face off with a smaller, more conservative, Republican caucus in the House.

With Speaker Paul Ryan slated to retire at the end of the year, House Republicans will have a new leader in 2019. Rep. Kevin McCarthy of California, currently Ryan’s deputy, is favored to rise to the top GOP post, Minority Leader.

First, however, McCarthy will have to reassure members of the staunchly conservative Freedom Caucus, who are demanding more influence in exchange for their support.

The Freedom Caucus has the numbers to block a candidate for Republican leadership, but not enough votes to install one of their own.

McCarthy has moved to the right in recent months, touting his ties to the White House and support for signature Trump policies such as the border wall, as the congressman tries to woo conservative support within the caucus.

In a Sunday op-ed in The Wall Street Journal, McCarthy promised that House Republicans will continue to try and “build the wall along the southern border and enforce America’s immigration laws,” as well as pass additional tax cuts. If Democrats win the House, McCarthy conceded that Trump’s agenda — what he called “the project of rebuilding America” — “will grind to a halt.”

Pelosi, however, insisted on “PBS NewsHour” that there are policy areas where House Democrats could work with the White House, including infrastructure and prescription drug prices. “Hopefully we can work together to advance that agenda,” she said.

Biden to Set out Efforts to Narrow Racial Gap in Wealth

How Women’s History Month Çame to Be