Home Personal Finance Investment Cut Yourself a Break. Don’t Look at Your 401(k) 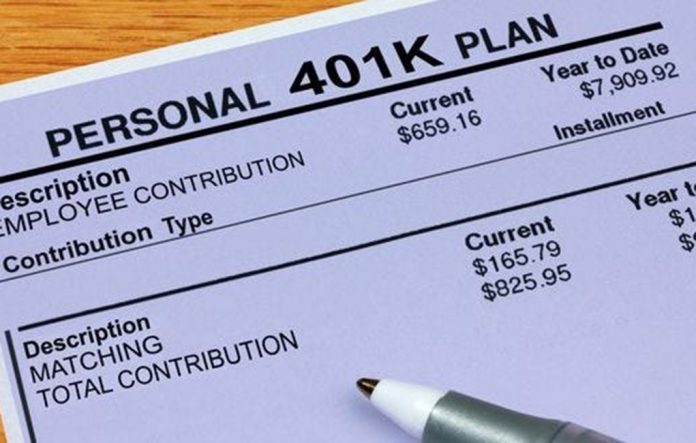 Not dwelling on the gruesome losses on Wall Street. Not looking at your 401(k) every other minute.

The old adages grew much harder to follow in March as we watched the Dow plunge by more than 30% from the records set just a month ago.

The pocketbook realities of COVID-19 have hit us everywhere from our workplaces to our 401(k) plans.

One reader in West Bloomfield, Mich., emailed me confidentially: “I’m not selling, buying or checking my account. Not much I can do to change what happens now.”

We’re looking at loss all around us. Loss of savings. Loss of jobs. Loss of lives.

So, maybe, not looking at your 401(k) could be the best personal care move that you can make as we adjust to the drastically altered new normal.

Small business owner: ‘No time to be selfish’

Jane McNamara closed the doors on her Jazzercise studio in Royal Oak, Mich., a week ago. The emotion of the moment led her to snap a photo of herself at the door with the bright yellow dot saying “Facility Closed.”

“I’m walking away from something that I never thought I would have to shut down,” she said in a phone interview.

“At this time, it’s easy to panic. It’s easy to think poor me,” McNamara said.

But she’s not going there.

“This is a very positive thing that we’re all doing to help save each other,” McNamara said. “No time to be selfish.”

“You can handle a short-term hit,” she said, noting that many customers haven’t canceled their automatic monthly payments.

At the same time, though, the center is losing walk-in customers who pay by the class and has had trouble signing up new customers as the coronavirus scare built in the past month or so.

She’s the only paycheck in a one-person household.

McNamara, 64, knows she’s lost money on her retirement savings, too, but she hasn’t looked at all her accounts to calculate the losses. She doesn’t want to do it.

“It’s not as bad as 2008-09,” McNamara said. “Back then, I lost my home. I went underwater and I lost my home.” Her home was sold in a short-sale for less than the balance on the mortgage during the collapse in the housing market.

McNamara, who is a cancer warrior, said it’s important to be mindful of the human suffering associated with the coronavirus outbreak. “It makes me grateful that I’m not sick with this.”

Ticket broker: ‘My income is going to be zero’

Randy Smith, 59, lost his line of work in March as big name artists canceled or postponed blockbuster concerts amidst the coronavirus crisis.

Smith is a ticket broker and typically buys and sells tickets for entertainment events, comedy shows, theater productions. Names like the Rolling Stones or Elton John would have brought in big money; not now. He stopped trying to sell tickets for Detroit’s professional sports teams long ago.

“Our teams are so poor. The demand is just not there,” Smith said.

The abrupt halt to large gatherings and the stock market meltdown hit him at exactly the wrong time.

He just bought a condo and tapped into a sizable chunk of cash to do so. He still has some emergency cash on hand but not as much as he did before buying the condo.

“I will live like college students,” said Smith, who was an attorney for many years. “I guess Ramen noodles still taste good.”

Smith has built up six-figures in retirement savings, about 85% of it was invested in stocks. And he estimates that he’s seen losses of about 30%. But he’s not selling off his investments.

“The U.S. economy, fundamentally, nothing has really changed,” he said, “other than the fact that we have a one-time event that’s going to last for however long it’s going to last.”

He, too, feels for those who are worse off, those who will lose jobs and not be paid for even a short time by their employers, as many businesses close for the next two weeks.

“It filters down. And people who don’t have savings are going to be hit immediately,” he said. He is looking into volunteering to help bring food in the community to people who need it.

Economics professor: ‘I am NOT selling’

Others, including some economists, insist it doesn’t make much sense to dwell on the rapidly shrinking bottom line in retirement accounts.

“I’m not checking my balance often much. I think if you check your balance too often, it can drive you crazy,” said Charles Ballard, a Michigan State University economics professor.

Ballard said his overall balance for his retirement savings plan at MSU was down a little more than 10% as of March 16. Some stock indexes are down about 30% but his entire portfolio is not down that much because he reduced his exposure to stocks “as I found myself getting closer to retirement.”

“I am NOT selling. My strategy for 40 years has been to contribute every month to my 403(b), which is run by TIAA,” he said.

For many years, he was comfortable investing his entire retirement savings plan in stocks. But he put more into bonds and real estate as he moved closer to retirement age.

“But I still have a lot of stocks.”

“It will come back this time, too.”

The reality is there’s only so much you can control here — and a lot that you really cannot control.

Financial strategies for everyone

You can talk to your credit card issuers, bank or mortgage company to see what options are out there for skipping a payment or seeing a reduction in your interest rate, if money is tight now.

You can look into a special 90-day window that allows you to pay your federal income tax bill by July 15, instead of April 15. (For those who can’t file by April 15, the Internal Revenue Service reminds individual taxpayers that everyone is eligible to request a six-month extension to file their return. To request a filing extension use Form 4868.)

You can make sure to file your federal income tax return as soon as possible, if you’re owed a refund.

The exact extent of the economic drag and job losses in the United States is difficult to estimate, according to Robert Dye, chief economist for Comerica Bank.

We’re likely to see a significant volume of layoffs, he said.

And job cuts always make people even more worried about their money, too.

“In my experience, with time comes more anger and stress,” said Melissa Joy, president of Pearl Planning, a wealth adviser in Dexter.

And the more stressed-out you get, the more likely you may be to throw up your hands and dump stocks at the bottom of the market. Or do other things you might regret later with your money.

“Every one of us is adjusting and modifying our lives,” Joy said. “Everyone is on a different emotional-reaction journey.”

Is someone in your family sick? Or testing positive for coronavirus? Are you still working? Are your neighbors working?

“I’ve talked to small business owners who are laying off their entire team,” Joy said.

Carpet cleaning services are seeing a loss of business, as some people don’t want people to come into their homes during a health crisis.

So you may need to consider what you’d do if you lose a paycheck.

Before selling every stock fund in your 401(k), she said, step back and consider how much cash you have on hand in a savings account or a money market account.

If you have enough to get you through three months to six months here, she said, you can buy more time and wait things out here.

One retiree she talked with acknowledged that his spending will drop significantly. He can’t splurge on a fancy dinner out in restaurants because the restaurants only offer takeout now.

As a result, she said, the retiree set up a plan now to reduce how much money he’s going to take out each month from his investments. He can live on less. He won’t need to sell as much stock during the downturn and may be able to see some upside in the future.

“I like to talk about cash needs. Think through how many months you can get through with the cash you have on hand,” Joy said.

“Focus on what you can control has been my mantra,” Joy, 45, who has two children.

In her family, she said, they’re focusing on moments of gratitude, contributing to the community, taking care of their family and health.

Maybe taking a deep breath here is easier said than done but it’s worth doing.

Where To Invest 2010: Plodding Along

Consumers are Padding their Checking Accounts