Home News Headlines Cory Booker is About to Miss the Next 2020 Debate. Why He’s... 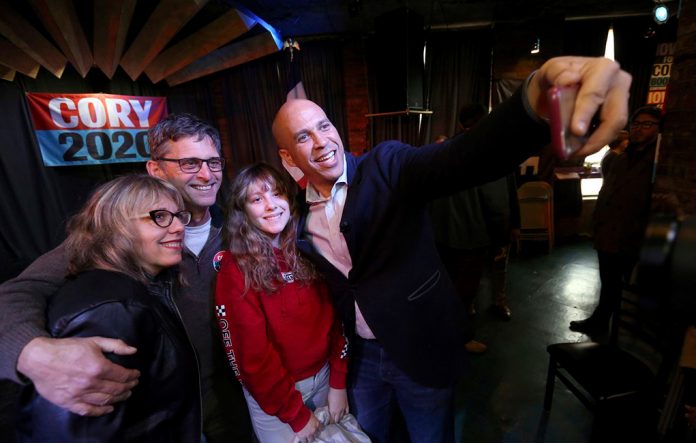 Booker, the New Jersey senator running for president, once again had a room of Democrats welling up Friday as he told the story of a dying mentor who had gone blind, yet left him with the words “I see you, I love you.” For months, Booker has drawn tears from small audiences and standing applause from big arenas with his rousing mantra, “We. Will. Rise!”

But those moments have proved fleeting in his campaign for the 2020 Democratic nomination.

Booker’s support in public polls has hardly budged. He trails the top candidates in fundraising. And approaching Thursday’s deadline, he is almost certain to miss the qualifications for the next Democratic debate — a fate that has rendered candidates afterthoughts.

The disconnect between his strong receptions in person and the tepid support in polling has been a frustration to supporters, a roadblock to his candidacy, and, to many political observers, a bit of a mystery.

Democrats have been fretting that their front-runners are all flawed — too liberal, old, young, or uninspiring. Meanwhile, Booker, a 50-year-old senator with dazzling speaking skills and the personal and political profile to seemingly reach a wide swath of the party, hasn’t gotten a serious look as an alternative.

Booker says there are signs of growing momentum, and a path to victory. But so far, the story of his candidacy is that people like him — just not for president.

National surveys released Tuesday by Monmouth University and Quinnipiac University found Booker polling at 2% and 1% among the remaining candidates, respectively. Meanwhile, Andrew Yang, a businessman who started the race as a virtual unknown, has polled better and this week met the criteria for next Thursday’s debate.

There are many theories about why Booker has failed to catch on. But the one that comes up most often centers on his message of unity. Democratic voters often cheer the sentiment, but few have made Booker their top choice.

He’s stuck “in the friend zone,” said Monmouth pollster Patrick Murray. “I don’t think he’s made that transition from a message that everyone loves to an appeal that he is singularly capable of being the one to lead the charge.”

Instead, the warm but fuzzy feelings have left Booker without the hard edges that might clearly distinguish his place.

By contrast, Sens. Elizabeth Warren and Bernie Sanders have firmly positioned themselves as liberal champions, Joe Biden has campaigned as the electable, experienced option, and Pete Buttigieg claims to be the voice of a new generation. Each repels some voters but also attracts a firm base of support.

“Every time you see him, it’s a great speech,” said Buzz Pounds, the Democratic chairman in Delaware County, Iowa, where Booker spoke Friday night. “But is there something I can grab? A policy proposal? I think most of the other candidates have found a way to do that.”

Booker has hoped to re-create the coalition that propelled Barack Obama to the White House, and seemingly could have broad appeal. He’s an African American who once led a low-income city, Newark, and also connects with the party’s donor class. He’s liberal on many issues but more business-friendly than Warren or Sanders. He’s a gregarious campaigner and savvy on social media.

But Democrats often say they see Booker as a vice president (he was a finalist to be Hillary Clinton’s running mate in 2016) or a Cabinet secretary.

Booker and his campaign have for months insisted they aren’t worried about poll numbers and are instead focused on building a strong ground operation in Iowa and peaking at the right moment. They cite endorsements from a range of Iowa activists.

During his swing through the state last weekend, Booker said that he’s seen new momentum since the November debate, and that despite likely missing the December contest, even more people are rallying with donations and support. After Sen. Kamala Harris, D-Calif., dropped out of the race last week, Booker is one of only two black candidates left for a party that claims to represent the country’s diversity. He has directly appealed to Harris’ supporters and donors — and has stepped up his fundraising, bringing in $3 million in the last three weeks, according to his campaign.

“Right now people are responding,” Booker told the Philadelphia Inquirer. “We’re seeing surges in online contributions — some of our best online fundraising days of the campaign — that are helping us not only invest in getting on the debate stage, but should we not, it will help us to stay in the race.”

Despite running in place for 10 months, his pitch is virtually identical to the one he has used since launching his campaign in February — with the same themes, anecdotes, and jokes. In his speech here, delivered in the basement of a bar as about 80 listeners ate pizza and sipped beer, Booker defended his message of “civic grace” and “a more courageous empathy” as one worthy of a president.

“We’ve seen us lose before when we had somebody with a better 15-point policy plan,” Booker told the voters in Manchester. “What is undergirding the values and virtues of this nation is what’s really important right now, and I’m telling you I’m running for president for those reasons.”

At least one Harris supporter came to the event in Manchester and said Booker is now his first choice.

Booker allies have downplayed the impact of missing the December stage, arguing that the debates have diminished in value. If he can make the January event, the thinking goes, he can still surge just in time for Iowa’s Feb. 3 caucuses. And if Biden stumbles, Booker supporters hope he can supplant the former vice president in South Carolina, which has a significant black electorate. Biden’s strength with those voters, though, has so far boxed out Booker.

For months, Booker’s team has offered various explanations for why he wasn’t gaining altitude: It was a crowded field. He was introducing himself. He would peak later.

“We’re seeing candidates of color face real challenges, including uneven media coverage, questions around electability that are centered on race and gender, and fundraising challenges, particularly with billionaires buying their way onto the debate stage,” said Adrianne Shropshire, executive director of BlackPAC, a group that aims to mobilize black voters.

Still, Booker began the race with some significant advantages. He has long-standing ties to elite donors in New York, Los Angeles, and Silicon Valley. He has an unusually high profile, and delivered a prime-time speech at the 2016 Democratic National Convention. He pops up on sitcoms and celebrity gossip pages.

Yet he has been passed by rivals like Yang, Buttigieg, the mayor of South Bend., Ind., and Minnesota Sen. Amy Klobuchar. Yang and Klobuchar have done it while raising less money.

Buttigieg’s rise has particularly rankled some in Booker’s circle. A super PAC supporting Booker is airing Iowa ads comparing the two Rhodes scholars who have each been mayors, labeling Booker as the real deal.

Another theory holds that Booker might actually be hurt by his many years in the spotlight of elite media outlets in New York and Washington: He now lacks the novelty of Buttigieg, though he still gets coverage. “It’s hard to be a new thing when you were a media darling a decade ago,” said one Democrat who has closely tracked Booker.

Scott Foens, a Booker supporter who came with his wife, Linda, to see him in Manchester, echoed one pundit who suggested Democrats may feel they have “checked the box” when it comes to electing a black man president, and therefore are looking to other options. At a separate event, Elaine Hughes, of Independence, Iowa, said some may also fear nominating a black candidate given the way Trump has used racial animus as a political force.

Others, however, say Democrats just aren’t looking for friendly.

“People’s impression of Cory Booker is that he’s a really nice guy and he cares about people,” said Bruening, the Clayton County chairman. “And then they think about him against President Trump and they’re like, ‘Uh, how’s that going to go?’”

Back in Iowa, Obama Reaches for Caucus Magic

What to Watch at the Convention Thursday