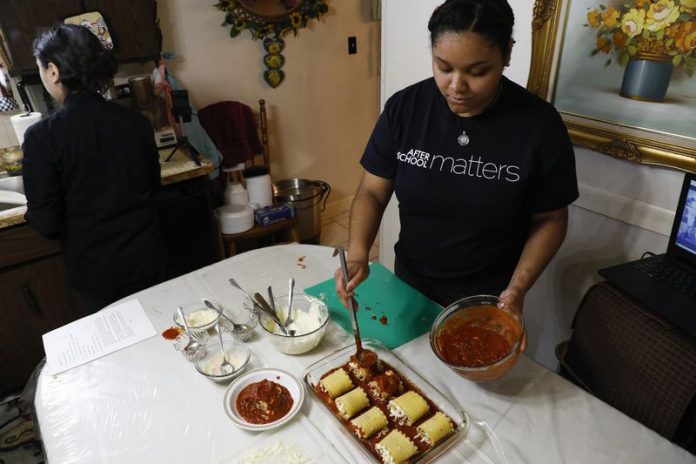 Enamored with fashion design since childhood, Jasmin finally learned to sew clothing through an After School Matters program in 2017. She’s since made jumpsuits, a floor-length gown, shirts, backpacks, and recently, masks for friends and family to wear during the coronavirus pandemic.

Knowing how serious the virus is and how cautious people need to be, Jasmin said shifting the summer program online offers students like her a chance to earn a bit of money and do something they love from home.

More than 10,000 Chicago teens could earn stipends this summer for participating in After School Matters programs, now in their 30th year. Close to 17,000 applied for a spot in one of more than 500 programs, which began Monday. Summer students earn participation stipends ranging from $336 to $850, depending on the program’s complexity, time commitment and level, such as apprenticeship and internship, said Chief Program Officer Melissa Mister.

Programs are also offered during the school year. Funding for the nonprofit comes from the city and state, the private sector and individual donors. In fiscal year 2019, more than half its revenue came from government grants, according to the organization.

Though the stipends are paid in installments to encourage consistent participation, Mister said program leaders believe in “compassion over compliance,” understanding many teens need to help with babysitting or other home responsibilities, or contribute financially.

“The stipend really is about communicating to the kids, it empowers them, reinforces the value of their time and efforts,” Mister said. “‘Your hard work means something and it’s important,’ and kids need the opportunity to earn money whether it’s to meet their own needs, remove barriers to participation.”

For the fanny pack, Jasmin’s instructor already sent a pattern and fabric, selecting prints in shades of blue, her favorite color, and of the Disney princess Jasmine.

“I love the idea of turning something completely normal into something extravagant,” Jasmin said.

Skills she’s learned through the program made her realize what she wants for a career, and she has started looking into colleges with fashion majors. With the stipend, she’s been able to put money aside for college and living expenses, knowing she wants to go somewhere out of state. She’s also a cashier at Target and worked about 15 hours a week during the school year.

In Beverly, Victor Davis is in his fourth year of After School Matters’ Leadership Council program. Entering his senior year in the finance pathway at Chicago High School for Agricultural Sciences, Victor wants to continue studying finance and become a CEO, with particular interest in tech branding. A problem-solver who loves figuring out how to finish a task most efficiently, Victor said he’s inspired by innovations from Elon Musk and Google, but lately has also been moved by businesses helping the community. In addition to telling his mom his ideas all the time, he said he writes them down in a journal.

Victor said the program “also gave me a chance to learn that what you should do in a career is something that you like to do and get paid for it.”

She noted the pandemic has caused significant job losses, and with more parents out of work, the money teens earn may be of extra help this year.

“I relied on the stipends to support my family when I was in high school and even now to help pay for school, groceries … “ she said.

Since she was 8 years old, cooking has been her passion. When budget cuts affected the culinary arts program at her high school, she sought another way to pursue her goals.

“Chef Gloria has really been an icon for me, and I hope now that I am an instructor, I will be able to do the same and motivate my teens daily,” she said.

Getting the inside perspective on what Hafer dealt with when Louden was a student has been humbling, she said.

The week before summer programs officially started, Hafer spent hours weaving through the city, delivering more than 200 packages of ingredients to her students.

“I am going from 13400 south to 800 north, so from one end of the city to the other,” said Hafer, who lives in Chicago’s far southeastern East Side neighborhood.

Her six-week recipe plan uses the perishable ingredients early on, and everything can be made at home using minimal supplies, she said.

“Youth are fun because they’re inquisitive, and they want to learn,” she said.

But she’s also enjoyed teaching adults, some who never had the opportunity to learn how to cook: “When in the kitchen learning how to cook, 99% of the time I don’t care if they’re 14 years old or 75 years old, they’re asking the same questions, which is fun.”

Minority Students in Chicago Get a Boost from Tutoring Labs