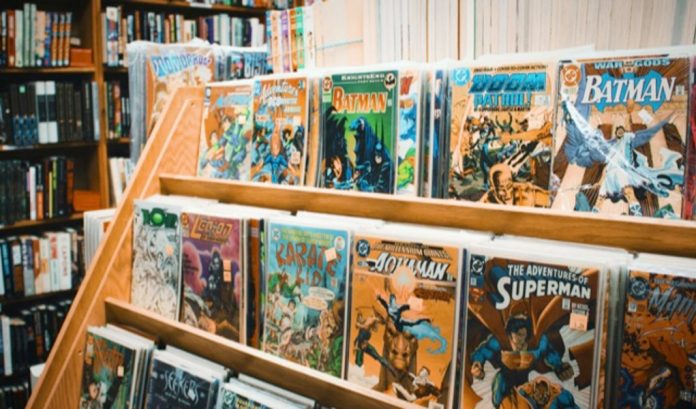 The long drought is broken. Diamond Comic Distributors, which delivers most comics to retailers in North America, announced April 28 on Twitter that it would resume full services on May 20.

Diamond had previously announced in late March that it was halting all deliveries, which left comic shops with no new product, and no way for publishers to distribute.

Because the comics industry didn’t just grind to a halt back in March. A lot of comics and comics-related activities continued, despite Diamond. Since there are still three weeks between now and May 20, it behooves us to acknowledge what has come before, and what continues still.

One of the most heart-warming stories (if you love comic shops) was the #Creators4Comics saga. It was a Twitter-based, grassroots charity auction, wherein comics creators would donate comics, original art or personal experiences (like a Zoom chat with a writer or artist), with proceeds going to comic shops in financial distress. According to the New York Times, @Creators4Comics raised $430,000 before closing its digital doors.

Then there is DC Comics, which has announced that it will distribute (in a limited fashion at first, and then robustly) with two discount comics dealers, beginning April 28. This announcement has sent a shudder through the industry, as it opens a Pandora’s box of potential land mines for print distribution.

Nevertheless, DC has persevered. Five new titles shipped April 28, seven are scheduled for May 5, and five more May 12. How you can get these books from your local comic shop is pretty much up to how each of those stores is operating during the shutdown (Curbside? Delivery? Not at all?).

Meanwhile, backstock is still available at online retailers for delivery. I’ve taken the opportunity to pick up some collections and OGNs (original graphic novels) that I always meant to get, but something else always had higher priority. With a paucity of new material competing for my dollars, I’ve had the opportunity to fill in my collection — and read (or re-read) some great, classic stories.

Also, not all comics go through Diamond. Some retailers, like mighty Amazon, have alternative distribution methods. Which means that a lot of new comics — mainly collections and OGNs — continue to be available on schedule.

I can’t list every new book that’s come out during the shutdown, but you can see for yourself by clicking Books/Comics & Graphic Novels at Amazon, or the equivalent at other online retailers. (Hint: “Batman: Last Knight on Earth” just came out, and it’s a winner.) But I will mention the explosion of middle-school (MS) and young adult (YA) graphic novels, as exemplified by big players DC Comics and Random House, since there are a lot of kids home from school with nothing to do.

DC has released a plethora of youth-oriented GNs recently, including “Zatanna and the House of Secrets” (Feb. 18, featuring a middle-school Zatanna Zatara and her dad), “The Oracle Code” (March 10, starring Barbara Gordon fresh to her wheelchair), Gotham High (April 7, with teenage Bruce Wayne, Selina Kyle and Jack Napier), “Anti/Hero” (April 14, a completely original story about two completely opposite, super-powered, middle-school girls) and “My Video Game Ate My Homework” (April 28, another original story about middle-school kids trapped in a video game). I’ve only read the first two; I enjoyed “Zatanna” well enough, while “Oracle Code” blew me away.

They have four more coming in May and June. The list includes “The Lost Carnival: A Dick Grayson Graphic Novel” (May 5), “Superman Smashes the Klan” (May 12), “Wonder Woman: Tempest Tossed” (June 2) and “You Brought Me the Ocean” (June 9, a “coming out romance” starring Aqualad).

Of the four, the Superman book excites me the most. Based on “Clan of the Fiery Cross” from the “Adventures of Superman” radio show, it is exactly what it sounds like. (Yes, I have the radio shows on cassette. Don’t judge.) The art is more cartoony than I’d prefer, but then again, it’s aimed at a younger audience than me. I’ve read the first chapter, and I’m ready for more. (There’s a trailer on YouTube if you’re interested.)

Random House has also gotten into the MS/YA graphic novel game in a big way. The publisher doesn’t have a comic book company lying around with creations going back to the ‘30s to adapt, so all of their GNs are original intellectual property.

I’ve already read “The Runaway Princess” (March 3), and given it a positive review, especially for parents wanting to co-experience the book with an elementary-age child. I have “Aster and the Accidental Magic”(March 3, MS) on deck, which will be followed by “Witchlight” (April 14), “Stepping Stones” (May 5, MS), “Suncatcher” (May 19, YA) and “Kerry and the Knight Forest” (July 7, MS)

Of the group, “Suncatcher” is highest on my list, as it involves rock ‘n’ roll. It features teenage Beatriz, a teen who starts a band, and discovers her grandfather’s soul is trapped in an old guitar. That’s a twist on the age-old trope of a soul being trapped in a sword (See: DC’s Katana).

That’s just two publishers, and just their MS/YA offerings. So you can see that there’s plenty of print material in the pipeline for all ages, if you know where to look. (And I just told you.)

Further, that’s just print. As everyone knows, digital has been pushing out print throughout the publishing industry. What about comics?

Well, they do exist of course. All major publishers print their comics in both print and digital form, with Marvel Comics available on Marvel Unlimited, and just about everyone else on comiXology, (DC comics are also available on their streaming service, DCUniverse.com.)

But the publishers have been very careful about NOT letting digital push out the print, because publishers, creators, fans and collectors really love print, and because no one wants to put thousands of comic shops out of business.

So most publishers have been careful during the shutdown not to damage the future sales of current (but unavailable) print product by releasing it as digital. We will simply have to wait for the regularly scheduled issues of our favorite titles, in both formats.

But there are exceptions.

Take for example Dark Horse, which is taking advantage of the captive audience by releasing a cornucopia of first issues in digital … for free. I can’t sum up their offerings any better than their press release: “From now until April 30, 2020, enjoy the work of an array of writers and artists in stories ranging from Umbrella Academy, Witchfinder, Stranger Things and American Gods, to young readers selections like Disney’s Frozen and Itty Bitty Mask, to graphic novels like Hellboy Volume 1: Seed of Destruction, Beasts of Burden Volume 1, and Empowered Volume 1!”

And there are tons of comics that were always planned to be digital-first or digital-only, which will come out as scheduled. Archie Comics leads the list for me, because they’re publishing 80th anniversary collections of their major characters, from Archie to Josie and the Pussycats to the Crusaders. The books range in price from $1 (20-pagers) to $2 (40-pagers).

Plus, the publisher will offer free first issues of “DC Essential Reads” until June 8. So you can read “Watchmen” #1, “Sandman” #1 and more at places like ReadDC.com, comiXology, Amazon Kindle, Apple Books, etc.

Even better, the first chapter of “Batman: The Adventures Continue” arrived April 1, a book based on “Batman: The Animated Series” — for my money the best presentation of the Dark Knight ever created. Written by Alan Burnett and Paul Dini (both B:TAS veterans) and illustrated by Ty Templeton, the digital-only title is even shaped like a TV screen. DC was so excited about this book that they hired Kevin Conroy (the voice of Batman/Bruce Wayne on the animated show) to read the first chapter on DC’s Instagram April 9. The second issue came out April 15.

And that’s just the comics. There are comics-oriented activities available as well. And guess who’s doing them?

First, all of you who are now going to meetings online or in video chats — which includes your humble narrator — can use virtual backgrounds to make it look like you’re in the Batcave, or in Metropolis, or Atlantis or … well, DC has five different sets you can use, which can place you in all sorts of unusual DC Comics environments. You don’t even have to choose; you can download them all for free.

I should mention that Marvel Comics has also jumped into the virtual-background arena (available at Marvel.com). And some of them are very nice. (I can’t wait until my boss sees the window from Dr. Strange’s Sanctum Sanctorum behind me.) But they don’t have nearly as many as DC, which is churning them out at an impressive rate.

In addition, DC is hosting “DC Kids camp” every weekday, with new interactive activities for parents and kids each weekday.

A cursory search brought up coloring pages (which you can download), games (“Identify these characters by their gloves!”), readalongs, how-to-draw tutorials, Superman origami (no idea how that works), DIY Build Gotham City (ditto) and some activities that are hard to describe (“Batgirl’s Crime Slime”). I was able to access most by finding links at dccomics.com, or by going directly to the DC Kids Twitter (@DCComicsKids) and Instagram (dckids) accounts.

And as long as we’re on the subject, DC has announced “DC Tuesdays,” some sort of regular video content on YouTube. It began April 28, with “The History of Shazam”.

So yay, new comics return on May 20. But it’s not like we don’t have plenty to keep us busy in the meantime.

(Article written by Andrew A. Smith)