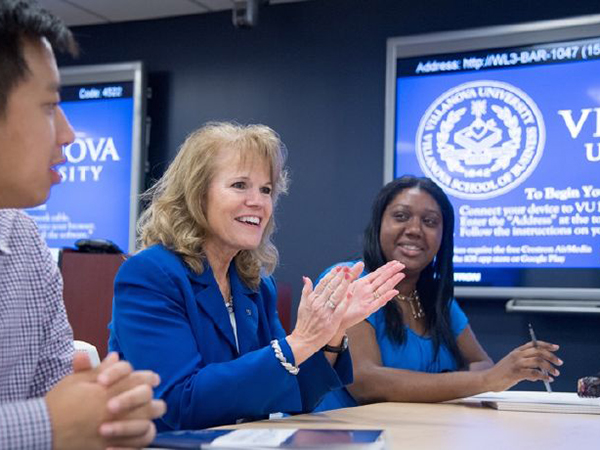 But what about the M-for-math part?

The answer matters, Russell said during a recent Q-and-A with The Philadelphia Inquirer ? especially if there?s any real push to get more women into the ranks of chief executive. ?I have this whole theory on if we?re going tBYo really impact society at the CEO level, we?ve got to get women in finance, because that?s the easiest route to becoming a CEO.?

But, as she points out, the field of finance is ?very male-dominated. When you look at business schools, most finance students are men. If I could make change, it would go back to 5-year olds. How do we get girls excited about math? If you look at the STEM movement, they?ve done a fabulous job on enticing girls to get into STEM. They?re doing great, and more power to them, because that helps us because most of the people in STEM will, eventually, go into business. That?s good for us. But, when you think about high school, and elementary, middle school, they teach hardly anything about business. Right?

A: If you?re good in math and you?re a girl, they?re say, ?You should be in engineering. You should be in robotics club. You should go into STEM.? That?s fine, but we need to get in to talk about careers in business as well, because those girls who are good in math, would be great in finance, in accounting, in analytics, in economics, but they don?t get exposed to any of this.

Q: They don?t know all that exists.

A: If they all came to Villanova, fabulous. But, if they don?t, but they go into business, I?m happy, too, because we?ve made an impact on society. So, we?ve just got to go way back into the system and get girls excited about business. We?re partnering with Girl Scouts. We?re partnering with all-girl schools. We?re trying to do more to get girls excited about what the careers are in business, and what could you do. Even if you go into arts and sciences, you?re going to need business skills.

Q: How do you get kids generally, little girls, specifically, excited about business?

A: One of the things that?s easy for them to understand is entrepreneurship. We just partnered with an all-girls school, Agnes Irwin (a private college-prep school outside Philadelphia).

A: That happens to be where my daughter goes, and they happen to have a center for advancement of girls, so I was like, ?Let me just start there.? Ninth to 12th graders have a two-week project. Some of them travel to other parts of the world, and they do all kinds of things. I said, ?Why don?t you do a business thing? So, we partnered with them. They had about 20 ninth graders. We worked in teams to develop projects. This was on entrepreneurship, a two-week program. There were a couple of people who taught them how to do a pitch for entrepreneurship, taught them how to do communications, like communication skills, taught them about developing products, what you need to do. Then myself and some of our successful undergrad women entrepreneurs went and we were ?Shark Tank? when they did their pitches. It was super fun. Oh, my gosh, they came up with fabulous ideas.

One of the easy ways to get them excited about business is entrepreneurship, because there are a lot of kids that, maybe, want to go into fashion. Maybe they want to go into sports. Whatever it is they want to go into, they understand, ?Oh, wow, I?m going to need business skills to go into that, because I have to figure out who?s going to buy my product. How do I market my product? I was a Girl Scout leader years ago and Girl Scouts are trained. They have something they call Cookie College. So, from second to fifth graders, they learn how to sell cookies.

A: When I was at Maryland (where she was a high-ranking dean in Maryland University?s business school), we set this partnership up with them where they would come to the business school, and they would do the training, but we hosted it and helped them understand being in a business school ? what it?s like. You?re teaching second graders about persuasion and all that kind of stuff, which is fabulous. Because, once again, it?s building the skills early on about if you want to have your own business, which we know a lot of women would like to do.

Q: Now, back to high heels. Writing about CEOs, I ask a lot of female execs about high heels ? whether they think they are a required part of the dress code. It?s mixed. Some say yes, many say, ?Of course not.? But then, they also all say they wear them. And, they are usually wearing them during our interview.

A: One thing I want to say about this, which is kind of funny: I was meeting with this gal who?s a CFO in finance, and I always say, ?Gosh, I need you to come back in the classroom and talk to, especially the younger women.? Because if you look at women students, undergrads, they like to see somebody ? well not just women, the men too ? somebody like three years out of school. They don?t want to see somebody like me, even though I would love for them all to see me or CEOs. They actually want to see somebody that they can relate to and they can say, ?could I do that job and could I look like you??

Then, they do look at them, and they look to see how they?re dressed, and they always look at the shoes. The women always do. So, it?s always funny, because I was just talking to this woman. You need to come back in our classroom, because they could see how women could be successful in finance, and you also have really cool shoes on. So, it?s like you were thinking about the shoes. I think our young people always look at the shoes. And they?re like: ?Are they really cool? Do they have cool shoes on? Could I see myself like them??

So, yes, there?s something about the shoes.

Moving On After a Bad First Impression

How to Ask for What You Really Want in the Business...