By Rodrigo Campos and Chuck Mikolajczak

NEW YORK (Reuters) – The death of the Republican healthcare reform may not prove to be the knife to the heart of the bull market some had feared, but to keep the Trump Trade alive investors should temper expectations for the breadth of expected tax cuts.

Anxiety over prospects for the healthcare bill gave stocks their largest weekly drop since the November presidential election. But its failure to pass could also force the Trump administration to come up with a palatable tax reform that could deliver this year some of the stimulus Wall Street has rallied on.

The S&P 500 rose as much as 12 percent since the surprise Nov. 8 election win President Donald Trump, mostly on bets that lower taxes, deregulation and fiscal stimulus would boost economic growth and corporate earnings.

As he acknowledged defeat for the healthcare bill, Trump said Republicans would likely pivot to tax reform. Bets on that shift in focus were seen in stocks late on Friday, as the market cut its day losses when news of the health bill being pulled emerged.

“The market believes it raises the probability of a tax cut later this year since Trump is showing more strategic behavior. (It) puts the market a little more at ease,” said Paul Zemsky, chief investment officer of multi-asset strategies and solutions at Voya Investment Management in New York.

On the campaign trail Trump promised to lower the corporate tax to 15 percent. In order to make the tax reform revenue-neutral, and agreeable to the most money-sensitive wing of his party, his administration counted on savings from the health bill that will no longer materialize.

“If we want to get something passed by the August break, it?s going to look a lot like tax reform light,? said Art Hogan, chief market strategist at Wunderlich Securities in New York.

“If we settle somewhere between the 25-30 percent corporate tax rate, that is far from the 15 percent offered in the campaign trail and the 20 percent currently in the House plan, (and) I think that?s where we end up.”

Softer cuts in corporate taxes leave stocks vulnerable after a rally on hopes for more, he said.

“It?s not a negative, it?s just not the positive the market had priced in.”

Aside from Trump’s pro-growth agenda some investors have pointed to an improving global economy and expectations for double-digit growth in corporate earnings as support for the lofty valuations in stocks.

“The evidence suggests to me that there is some Trump fairy dust sprinkled on this rally. That said, the underlying fundamentals do look better,” said Alan Gayle, director of asset allocation at RidgeWorth Investments in Atlanta, Georgia.

A survey on Friday showed Germany’s private sector grew at the fastest pace in nearly six years in March, suggesting an acceleration in growth for Europe’s largest economy in the first quarter.

Stocks could also turn to earnings to justify their price. First quarter earnings are expected to grow by more than 10 percent, according to Thomson Reuters data. In another sign of investor bullishness, February’s reading on consumer confidence touched its highest level since July 2001.

If earnings fail to deliver double-digit growth, stocks could again be seen as too expensive. At $18 per dollar of expected earnings over the next 12 months, investors are paying near the most since 2004 for the S&P 500.

“The advance we?ve had and the large spike in confidence, the expectations on the economy and earnings expectations – we continue to believe it is too high,” said Julian Emanuel, executive director of U.S. equity and derivatives strategy at UBS Securities in New York. 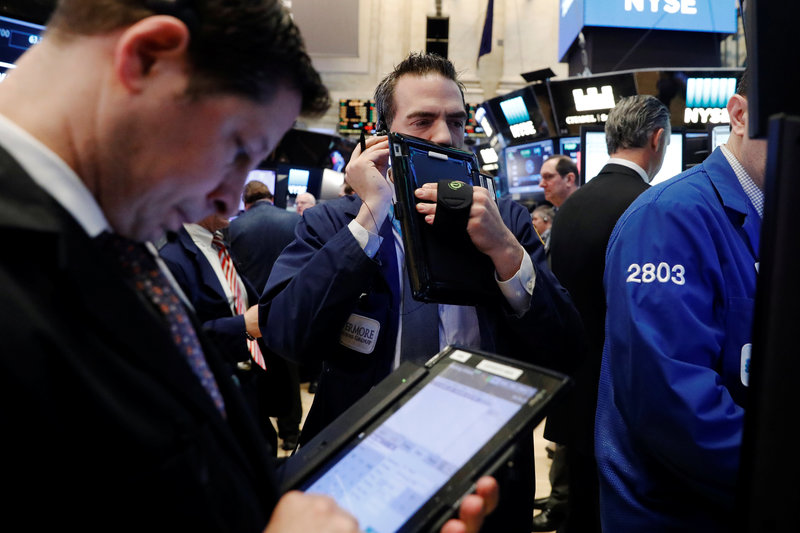