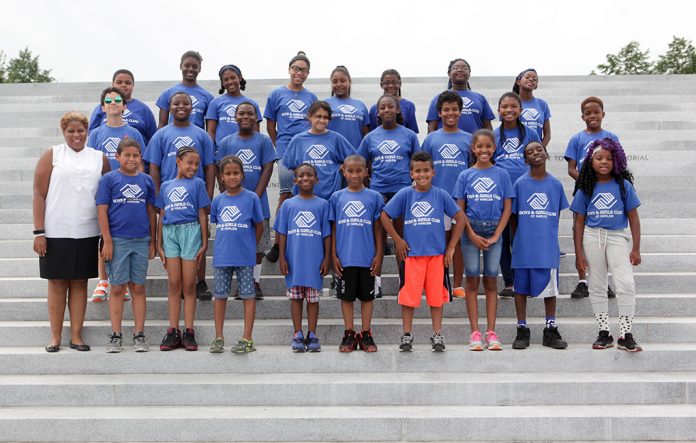 The Boys & Girls Club of Harlem will be celebrating its 40th anniversary this year and there is a lot going on with the chapter, which is run by executive director Dominique Jones, who joined came on board in March 2015.

“In this role, I lead and champion the work of our clubhouses that serve over 1,200 youth across the Harlem community. This includes designing and implementing programs that help our youth achieve academic success; good health and wellness habits as well as strong character and leadership skills,” explains Jones to TNJ. “I also work to bring people and partners in to champion our work; giving us their time, talent and treasure that helps to bolster the club experience for all we serve.”

Prior to her post at the Club, Jones served as Chief Programs Officer for Food Bank For New York City. Dominique has also held senior leadership positions at the United Way of Central Ohio and the New York City Administration for Children’s Services.

“I have had an accomplished career in the public sector; working both in government and not-for-profits; working on issues ranging from child welfare to affordable housing development.  A common denominator in all of this work has been how do we help people, children, youth and adults, develop and act on their own agency to become empowered and effect positive change in their own lives and communities,” says Jones. “The work of Boys & Girls Club of Harlem does just that at a critical time of a young person’s development and this is why I wanted to be a part of this organization.”

This year, 2020, is going to be exciting at the Club, having reached its 40th year. “I think that the reason the Boys & Girls of Harlem has been around for 40 years and has survived and thrives is because there are leaders and followers in past and present who care deeply about our kids,” says Shirley A. Lewis, Board Member; Bank Service Management Consultant, one of the longest appointed members.

She added: “In 1980, the Club’s founders saw first-hand the impact of societal problems decimating a generation of young people and the dearth of services poised to help.  Rev. Mannie L. Wilson, was the dynamic, politically astute Senior Pastor of the Convent Avenue Baptist Church located in the heart of Harlem. Rev. Wilson, and his then Youth Minister, Rev. Clarence P. Grant secured a charter from the Boys & Girls Clubs of America and became the driving force behind what would become an institution in Harlem with 40 years of uninterrupted service.”

What makes the Club work so well for the kids in the community? “40 years ago we became a refuge for youth in Harlem and today remain an anchor in our community. Our programming is culturally sensitive and relevant to Harlem youth and families. Harlem continuous to become more porous but BGCH is attentive and flexible to meet the needs of our youth and teens,” explains Shaba R. Keys, Board Chair, AVP of Government and Community Affairs, Columbia University,

One of the highlights of the Club is its expansive Teen Center featuring the DISNEY sponsored S.T.E.M. Center of Innovation. “In 2016 we cut the ribbon on our main clubhouse and headquarters; which was developed to serve as a showcase for our programs, but also to incubate promising practices in our work. We develop the space to ensure that our kids could access cutting edge technology as well as be exposed to a myriad of programs that prepare them for the academic challenges that lie ahead,” Jones said. “Core to this, has been consistent exposure to project-based learning opportunities in STEM.  We provide a minimum of 25 hours of STEM programming to our kids a year. Because of this and the diversity and impact of our work, we have been designated boys & Girls Club of America a Disney STEM Center of Innovation.”

Jones adds: “Another important space in our facility has been our teen center.  We knew that in our community there were limited places for our teens to go after school so we dedicated a space and have established several programs that are attractive to our young people.  This has included programming focusing on post-secondary achievement.”

The organization also looks for several ways to get the community involved. One way is its  Forty for 40 Ambassadors list. “We are pleased to bring together a strong group of New Yorkers who have been great champions of the Boys & Girls Club of Harlem.  Before the year gets into full swing, we will announce our group of 40 New Yorkers who will serve as ambassadors for our work and help us to raise $1M in support of or work,” says Jones.

Goals for 2020 for the Club? “In 2020 we plan to continue to serve more young people; but also establish more programming that will meet the news of the youth we serve.  This will include strengthening our workforce programming for teens,” Jones says.