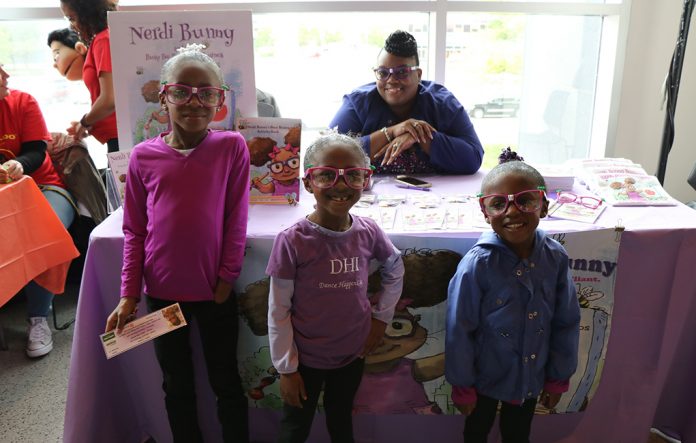 Winstead said it’s important to her that the boys see books with characters who look like them.

“Representation matters,” she said. “In order for them to be it, they have to see it.”

Families packed into the Lewis museum’s main floor to meet the three dozen authors, illustrators and publishers who exhibited at the fair. At one point, a demonstration of double Dutch jump roping to tie in with a new book had people cheering as children took turns in the ropes.

Jackie Copeland, the museum’s director, said the book fair, now in its seventh year, is a chance to build a literary community. When black children see their lives authentically represented on museum walls and in books, Copeland said, “they then feel they are participants in our culture.”

Aisha Toombs had the idea for her “Nerdi Bunny” children’s book when she was a kid herself, but it wasn’t until a couple of decades later that she wrote and released it. After initially seeking a publisher, Toombs decided to put the book out by herself.

“I just really wanted Nerdi to happen sooner rather than later,” said Toombs, who is an English teacher in the Philadelphia area in addition to being an author.

Her character’s look, Toombs said, was inspired by her niece’s large Afro hair puffs. She called her a “bunny of color” but added that she’s also had white children say they see themselves in Nerdi.

She has sold about 1,000 copies of a first Nerdi chapter book and has another on sale now, along with two companion books. The books are profitable but keep her busy — sleep gets sacrificed.

“When I’m not teaching, I’m Nerdi-ing,” said Toombs, who was wearing Nerdi glasses she made with a taped bridge and carrots at the corners.

The lengths the authors at the book fair described going to getting their books into the world underscore how striking former Baltimore Mayor Catherine Pugh’s “Healthy Holly” book deals were, especially given quality control issues such as misspellings.

Pugh has said she conceived of the idea after learning at a conference about the particular impact of childhood obesity on African American communities. Within a few years, she was receiving regular payments from the University of Maryland Medical System for shipments of 20,000 books at a time to be sent to city schools.

The hospital network, on whose board Pugh served, ultimately paid for 100,000 copies of the books under a no-bid contract. Other local institutions also paid for thousands more. Pugh read from one of her books at an event sponsored by health insurer Kaiser Permanente at the Lewis Museum in 2018.

Pugh resigned as mayor this month after the sales of her books came under investigation.

Tonya Duncan Ellis, the author of a self-published series featuring a girl called Sophie Washington and her family facing typical middle school issues, said she wrote the first book in the series in 2013 and recently surpassed 10,000 sales on Amazon. She’s trying to get her books accepted for use in her local Houston public schools, which she called a “formal process.”

Ellis said she learned about Healthy Holly before coming to Baltimore for the book fair.

“I think she should have gone through the proper channels,” Ellis said of Pugh’s deals.

For now, Ellis is working to get the word out on social media, and an 11-year-old YouTube book reviewer came to visit her at Saturday’s event. Ellis works as a real estate agent but hopes to dedicate more of her time to the books.

Several of the authors and publishers at the fair said they wanted to see books that represented the diversity of the black experience in America, stories not just about oppression and suffering, but resilience and celebration, too.

The Cooperative Children’s Book Center at the University of Wisconsin-Madison produces an annual breakdown of the races of major characters and authors in the books it receives from publishers. Its data shows rapid growth in the number of books about black characters over the past five years, but also shows that black authors remain underrepresented — writing 6 percent of the 3,600 books the center received in 2018.

Husband and wife Wade Hudson and Cheryl Willis-Hudson from New Jersey have been running their own publishing company for 30 years. They got started after being told by other publishers there was no market for the kinds of books they wanted to produce.

And while some progress has been made on diversity and self-publishing is opening new doors, he said, “we still have a long way to go.”