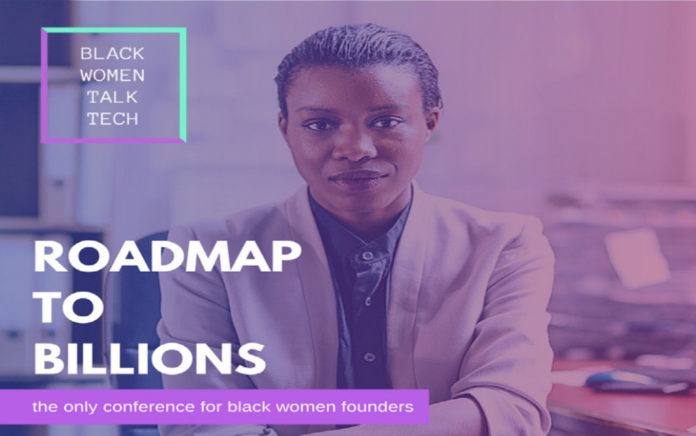 Earlier this month, the ladies of Black Women Talk Tech hosted their “Roadmap to Billions Conference 2018” to make their case to help Black women build the next billion-dollar company. It all went down at Microsoft?s headquarters in NYC via a powerhouse two-day conference that enlightened, engaged and informed while showcasing authentic accounts from top female founders in every space imaginable from home d?cor & architectural design to NASA technology to virtual reality, finance, education, marketing and much more.

Founded in 2016 by Regina Gwynn, co-founder of TressNoire; Esosa Ighodaro, co-founder of COSIGN; and Lauren Washington, CEO and co-founder of KeepUp, Black Women Talk Tech was formed out of shared experiences as business owners.

“Esosa, Lauren and I would see each other at the same conferences and were often the only chocolate drops in the room!” Gwynn shared in a recent interview with TNJ.com. “We realized we had so much in common when it came to the roadblocks in scaling our businesses? we had all gone past the ideation stage and refined our technical platforms and were ready to go to the next level.”

“We had a retreat in 2016, and were talking about putting together a conference to see if others were experiencing the same things too. It’s one thing to go to a conference and sit there and feel good about yourself, but we wanted to figure out what we could do to be actionable,” she adds.

They were shocked by the turnout of their first conference a year later.

Says Gwynn, ?We rented a small room at Google that could fit 60 people; it turned out that we had 300 RSVPs! We were surprised and excited that there was a demand for these kinds of resources, and this type of content and that it was resonating with others. That?s when we realized Black Women Talk Tech needed to be established.?

Their 2018 conference didn?t disappoint. The speakers offered numerous nuggets of wisdom that will go a long way, for example, if you?re looking for innovative ways to raise money or if you?re interested in tips for getting onto a reality pitch show.

Event attendees agreed on the importance of platforms like BWTT.

?I?m a supporter of Black Women Talk Tech and their events. It?s important for everyone, not just Black men but white men and everyone in between, to support Black women. They have been underrepresented for so long, but they are the most educated and have the most advanced degrees,? Mike Street, founder of TechFam, told TNJ.com (Street was a presenter of ?Breakfast, with Love!? an event during Black History Month to celebrate the work of Black female founders.)

Some of the speakers at this year?s conference included Mande Holford, PhD, and chief science officer/co-founder of Killer Snails; Jean Brownhill, CEO of Sweeten; and Karina Montilla Edmonds, a technology transfer coordinator.

?Last year?s conference drove us to this year?s conference which was three to four times the size of last year?s. We ended up with 87 founders, all amazing women working on tech companies that are poised to be the next billion dollar startup,? notes Gwynn.

?Now is an opportune time to support Black women and anything they are doing from a tech perspective and an entrepreneurial perspective because they are going to be the group to push America forward,? Street says. ?It?s really important for everyone to support Black Women Talk Tech and to support platforms like Black Women Talk Tech because it?s where we?re going to see a lot of economic growth.?