Home Lifestyle Arts & Entertainment ‘Black Panther’ Redefined Superhero Movies. Can it Do the Same Thing for... 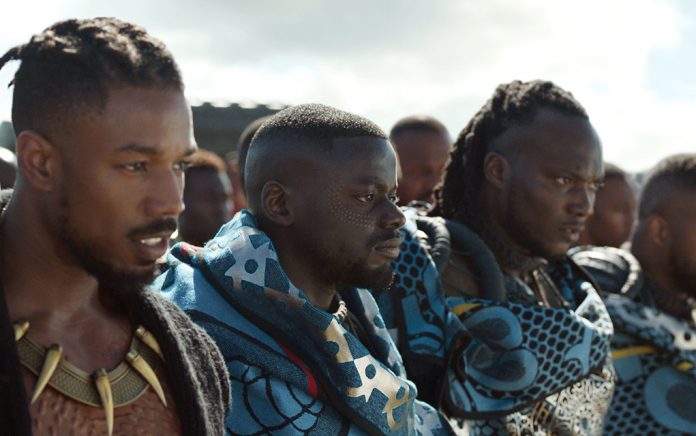 The February weekend that Black Panther opened and rewrote box office history, writer-director Ryan Coogler and the man who hired him, Marvel executive Nate Moore, pingponged text messages to each other, sharing images of moviegoers dressed in dashikis, pounding drums, dancing in the lobbies, celebrating a deeply felt connection to a movie many had been waiting their whole lives to see.

At the same time in Los Angeles, actors Chadwick Boseman and Michael B. Jordan, rivals in the film, celebrated by sitting courtside at the Staples Center for the NBA All-Star game, enjoying the moment, and feeling completely floored that players kept approaching them, wanting to talk about “Black Panther.”

“Magic Johnson’s standing on the court being honored and he looks over at me and Michael, and says, ‘I’m proud of y’all,’” Boseman remembers. “That … that’s just crazy.”

But there’s never been anything ordinary about “Black Panther,” the Marvel blockbuster that became the third-highest-grossing movie ever in the U.S. and brought in $1.35 billion worldwide.

The box office reveals just a sliver of the phenomenon that engulfed worldwide culture. In telling the story of Boseman’s T’Challa, the heir to the throne of Wakanda, a fictional African nation, “Black Panther” was a superhero movie that put black women and men at the center of the story that took place in a thriving African homeland not corrupted by colonialists. The Wakanda seen in the film is a place of aspiration, a land offering the possibility of healing and wholeness. Its very existence forced a reckoning with the costs of slavery on the black consciousness.

“It had the fun and fighting and things blowing up, but it also told truths about father-son relationships, about a fatherless child, about young, independent, strong, brilliant women and their place in the world with them standing in their truths and in their purpose,” says Angela Bassett, who plays Queen Ramonda, T’Challa’s mother and advisor.

“And,” Bassett continues, “think of when [Jordan’s character] Killmonger says, ‘Bury me in the ocean with my ancestors because freedom is more desirable than bondage.’ If you’re black in America and have read history, you unpack that. It’s more than one sentence. It’s a whole history lesson.”

“Black Panther” is aiming to make more history of its own and become the first superhero movie to earn an Oscar nomination for best picture. To make that happen, Disney hired veteran Oscar strategist Cynthia Swartz to orchestrate a campaign, bolstering the move with a significant budget that Marvel Studios President Kevin Feige says will eclipse any previous awards season push Disney has made.

“We’re all in on this,” Feige said during a lavish kickoff party held recently at the London, a luxury hotel in West Hollywood.

“All of our dreams come true if we have the courage to pursue them,” she said, calling “Black Panther” one of the most significant films to be released in the last decade.

The low-key Coogler smiled when asked about Kennedy’s assessment.

“We were just trying to make a coherent film that people felt on a gut level,” he says. “That they did feel it, that families went in all dressed up, saying, ‘Here’s a movie I can be proud of,’ that’s humbling.”

“Africa in films tends not to be a positive place,” Marvel’s Moore adds, “and Wakanda is the most positive place. Instead of Africa’s getting colonized or suffering from genocide, the movie showed a place and an idea that people could celebrate.”

Most of the movie’s cast and crew participated in those celebrations, whether they were organized by the studio’s publicity team (premieres, speaking appearances at schools) or completely random.

Letitia Wright, who played teen girl genius Shuri, flew to Tobago with her sister the weekend “Black Panther” opened. She wanted to escape, figuring if people liked the movie, she’d find out when she returned home. Basically, she says, she was running away.

“But it found me,” Wright says, laughing. “As it happens, the movie was opening in Tobago too, which I discovered when I went to the mall and the KFC and people are staring at me. ‘The girl from “Black Panther” is here!’”

Danai Gurira knew the attention was coming, in part, she says, because “Black Panther” was a story she had always yearned to see. When people went crazy for the trailer, she understood. When a mixed-race woman approached her at the London premiere and started to tremble and cry, telling Gurira the movie awakened a part of her she had never explored, she knew the power in that reclaiming.

Gurira and her “Black Panther” costar Lupita Nyong’o were in Nigeria in April, doing research for their adaptation of Chimamanda Ngozi Adichie’s acclaimed bestselling novel “Americanah.” And everywhere they went, people stopped, crossed their arms and made the “Wakanda forever” salute.

“Then there were the photos of the young women in costume,” Gurira says, remembering a picture of several little girls, none older than 5, brandishing spears, dressed as members of the Dora Milaje, the female warriors that Gurira’s “Black Panther” character led.

“My heart went out to that,” Gurira says. “They’re finding their inner warrior at 5!”

Bassett saw the same thing firsthand last month when she attended a women’s expo in Detroit and a group of young girls greeted her, dressed in costume and standing at attention.

“They were standing with poise and grace,” Bassett remembers. “They were still. They were strong. It was so precious. They had been impacted. They saw beauty and strength in that representation and that image. It meant something to them.”

Bassett pauses, holding on to the memory.

“Movies, you know,” she finally adds, quietly. “Movies have that power.”

Your Guide to ‘Hamilton: The Exhibition’ in Chicago: Will it Succeed?