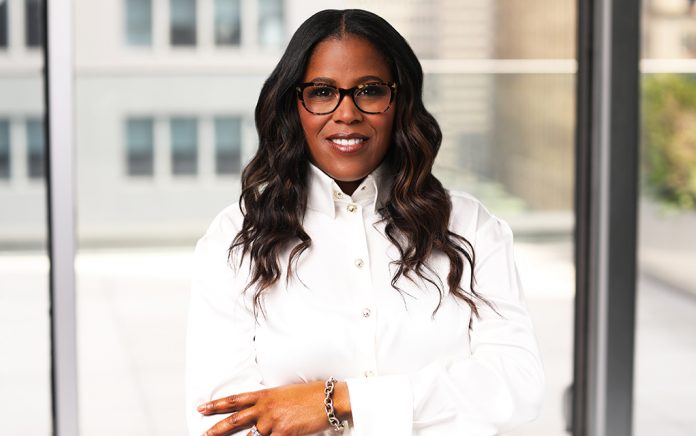 When The Network Journal (TNJ) in 2017 asked Thasunda Brown Duckett to tell us the three most important things she would like people to know about her, her very first answer was, “My passion is to inspire others.”

TNJ posed the question to her as one of the magazine’s 2017 class of “25 Influential Black Women in Business Awards.” At the time she was the CEO of Chase Consumer Banking and the first Black woman to join JPMorgan Chase’s operating committee.

She told us then, too, about the quotation she keeps in her office to keep her grounded: “Reach for the moon because even if you miss, you’ll land among the stars.” She heard these words repeatedly from her father as she was growing up, she said.

In May, Duckett became the president and chief executive of Teachers Insurance and Annuity Association of America (TIAA), making her one of two Black women currently leading Fortune 500 companies. The other is Rosalind “Roz” Brewer, who became the CEO of Walgreens in March.

Duckett recently addressed the Women Business Collaborative, an alliance of businesswomen’s organizations that work together to achieve equal position, pay and power for women and women of color, in an interview recorded for the group’s virtual annual summit on September 21st  and 22nd.

“There are so many times when I’m the only in the room, or so many times when I’ve had to do those mental gymnastics in my head, to reaffirm to myself that I am worthy and deserving to be exactly where I am and to be okay getting uncomfortable,” she says, commenting on key moments and opportunities that allowed her to rise in her career.

‘When I think about those moments, it starts with a strong foundation. You cannot achieve the level of success that I have been able to achieve so far without having the rock. And the rock to me is Otis and Rosie Brown. The rock for me is the history and understanding of the shoulders of giants upon which I stand upon today,” she adds, referring to the Otis and Rosie Brown Foundation she founded and named after her parents.

As TNJ prepares to host its virtual 23rd Annual 25 Influential Black Women in Business Awards” on September 23rd, we offer below Duckett’s responses to three critical questions, as provided by the Women Business Collaborative.

Taking on the CEO role at TIAA

“What would draw anyone to TIAA? First of all, it’s a mission-driven company. And as you know, I’m so anchored in purpose.  I’m so anchored in financial inclusion. This company [TIAA] obsesses over ensuring that people can retire with dignity, especially those who serve others.

“TIAA is a Fortune 100 company. It has a great consistent background and year-over-year performance. And lastly, I had to know that I could be productive, that I could help move a company forward. And that’s also understanding your attributes. To say, if the company aligns with my values, which it did, if I can believe that I am ready, understanding that there is a lot to learn, then the last part is will I add real value?”

“Let me first say, to Black women, the price has already been paid for us to be. And what I mean by that is, it was the cooks, secretaries, janitors, that entered corporate America and put those cracks in the ceiling because they were the first to introduce our gender and our melanin to corporate America and to business, broadly speaking.

“The second piece that I say to women, and women of color, is to know that your race and your gender is not a disadvantage, it’s a differentiator. I chose that mindset. Because I chose to say, the essence of who I am is the difference because I get to bring a perspective that we know is not yet equally in the boardrooms across corporate America, when we know there’s only 41 women leading Fortune 500 companies.

“So, my melanin, my gender, along with my knowledge and expertise and passion is my differentiator. And I chose to lean all the way in, with all of that making me who I am.”

How companies can increase female representation in leadership positions

“What would I say to leaders? We must decide. If we believe that talent is created equally, but opportunity is not, then we must decide that we can do more. Once we decide, then we can put the steps in place. It’s a mindset shift that we have to have as leaders.

Job Cuts for Seniors Could Up Homelessness

Hiring plans of US CEOs at 3-year high