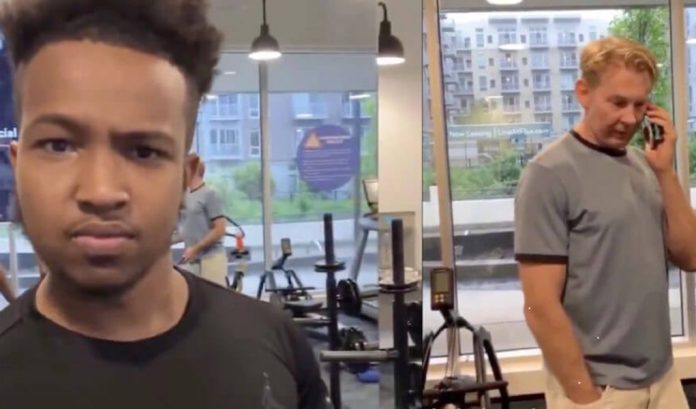 Another video has gone viral this week, this time showing a confrontation at a private gym in uptown Minneapolis that a group of black entrepreneurs say shows racial profiling in action.

Top Figure, a Minneapolis-based social media and branding agency, posted the video to its Instagram account on Tuesday night. In it, a white man confronts them asking if they are tenants of the building and thus authorized to use the gym in the MoZaic East building in Uptown.

Top Figure is a member of the WeWork co-working space in the building, and the men in the group, who are black, said they were tenants.

Austin demands to know which office they work in. They respond that they don’t have to tell him. He says he’s going to call 9-1-1 then.

“As you guys can see, we’re dealing with racism here,” one of the voices says in the video.

The men who work at Top Figure could not be reached for comment.

Austin, a venture capitalist with F2 Group and a vocal critic of renaming Lake Calhoun to Bde Maka Ska, said in an interview Wednesday that he regretted saying anything to the men and insisted he was not being racist. He said he called building maintenance, not the police.

He said the building had recently sent out an e-mail reminding them that only tenants were allowed to use the gym and other amenities in the building. He said he was suspicious that the men were not all tenants because he saw one person in the group of five men using his key fob to let others into the bathroom and other doors.

He said they became “aggressive” when he confronted them.

“There’s a whole bunch of people who don’t appear to be” part of the building using the gym, he is heard saying on the phone in the video.

He said a maintenance person ended up coming and talking to the group and then left.

In its social media post, Top Figure noted that it pays rent to work in the building. It also said the entrepreneurs do not often speak out about the racial profiling and age discrimination they face.

“We are sick and tired of tolerating this type of behavior on a day-to-day basis, and we feel that we had to bring light onto this situation,” they wrote.

The social post generated more than 3,000 comments and more than 20,000 likes by Wednesday afternoon and also was being widely shared on Twitter.

It comes in the same week of two other racially charged viral videos, one of which showed a white woman in New York City calling the police on a black man who asked her to follow the rules and leash her dog in Central Park. She was subsequently fired from her job.

The other showed a white police officer in Minneapolis kneeling on the neck of George Floyd, who is black, and who died shortly after, sparking protests in the city on Tuesday night.

Stuart Ackerberg, CEO of Ackerberg Group, which owns the MoZaic East building, said he was already feeling heartbroken upon seeing the Floyd video when he saw the video of the confrontation at the gym in his own building.

He said that two WeWork members had used their key fobs to access the gym on Tuesday night. And he assumes the other people in the Top Figure group also were employees.

“It appears they had every right to be there and to use that amenity,” he said.

Ackerberg said he spoke to Austin on Wednesday and expressed his dismay.

“I shared with him that I did not think it was handled well and there are other ways to go about this,” he said. “It’s unfortunate. Our goal is to create a safe and inviting experience for everybody.”

Austin said he and the other men continued to work out after the confrontation.

“By the end of the night, we were on talking terms,” he said. “I said, ‘I’m sorry you thought I was being racist, but I was not. If you were a bunch of women, I would have done the same thing.’?”

Green with Envy: Michael Dennis Keeps it Green, While Making the...