Home Lifestyle Arts & Entertainment Beyond the Cape: A Comics Showcase at Boca Raton Museum of Art 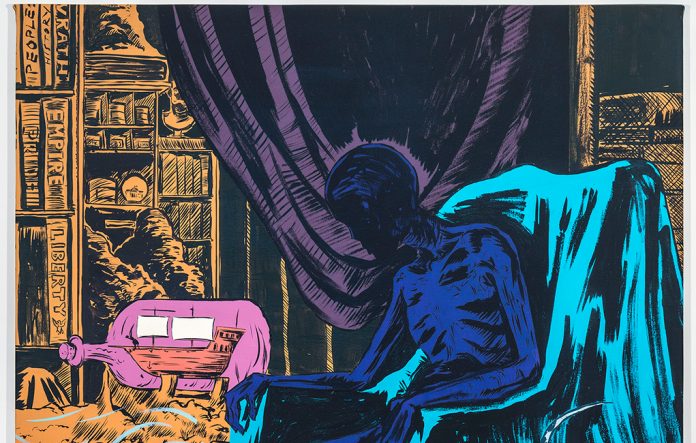 Kathleen Goncharov confesses that funk musicians of Chicago heavily influenced her approach to comics as an art form. “In the seventies and eighties [funk artists] were looked down on but are now inspiring today’s artists,” she said in an interview with The Network Journal.

Goncharov is head curator at Boca Raton Museum of Art in Boca Raton, Fla. Like many of the themes funk artists dealt with, her new exhibition, “Beyond The Cape: Comics and Contemporary Art,” has to do with such issues as politics, race, and gender. Comics superstars Kumasi J. Barnett, George Condo, Renee Cox, Liz Craft, Kota Ezawa, Chitra Ganesh, Mark Thomas Gibson, and Takahashi Murakami, are among the 40 artists featured. The show presents more than 80 works of assorted media, including paintings, video, photography, sculpture, prints, drawings, and tapestries. Rare comics and historic cartoons shown on vintage TVs are on display, in addition to contemporary animation.

“The exhibition is really two parts,” Goncharov explains. “You can actually read adult graphic novels in a reading room and the rest of the show features artists who are influenced by comics. So most of the artwork are pieces that are not quite as narrative, or stories told in a couple of frames.” The exhibition’s main goal is to show how comics and animation of all forms influence what people traditionally consider “serious” art, Goncharov says. The popularity of the social media site Instagram helped to make this type of pop art more relevant to the broader population, but the turning point for acceptance of comics as literature came when cartoonist and comics advocate Art Spiegelman wrote Maus about the Holocaust in 1980, she contends. “That really took off. That was the first bestselling graphic novel. Nobody ever thought that would happen.”

Interest in the genre continues to grow. “Lately, people are interested in brightly colored, narrative, surrealist-based art. Probably because there’s so much social media, and images look great on Instagram if they are flatter and more colorful,” Goncharov muses. “Instagram is used heavily by artists to market their work. Comics are everywhere in popular culture now.”

Calvin Reid, senior news editor at Publisher’s Weekly and editor of PW Comics World, was Goncharov’s muse for “Beyond the Cape” and much of the literature in the exhibit’s Reading Room comes from his private collection. Reid is one of the first literary figures to acknowledge the broad appeal of comics. Of particular note are the graphic novels written by U.S. Congressman John Lewis, a father of the civil rights movement. Lewis’ novel, March, is part of an extensive collection of works by Black artists in the exhibit’s Reading Room.

Also featured is Kerry James Marshall’s Rythm Mastr, a set of comic book drawings that transfers African mythological gods into modern-day superheroes. Last year, the Alabama-born, Chicago-based artist’s 1997 painting, Past Times, sold at Sotheby’s for a record $21.1 million, the highest price ever paid for a work by a living Black artist. “[Rythm Mastr] looks like a regular narrative comic strip, but [Marshall] does it for himself and for the art world,” Goncharov explains. “He wanted to have his work in the museums, but he also wanted to have an outreach to the community.”

The deeply thoughtful and provocative works of Mark Thomas Gibson, an assistant professor at Temple University, also are on display. “I just love looking at comics! To this day, I just love going to the comic book store and flipping through things because I’m so interested in the individualized touch of the different artists,” Gibson enthuses. Describing his own work as “deeply political and about how we deal with race and power structures,” he attributes the increasing popularity of this type of art to the spirit of the times. “Culturally, comics started getting on The New York Times bestseller list. Books started making people understand this is a form of storytelling. Non-comic book readers started having more of an affinity for it,” he concludes. “Also, this graphic form is direct. It wants to communicate and right now, society is in an extremely urgent moment.”

“Beyond the Cape” is scheduled to run through Oct. 6.