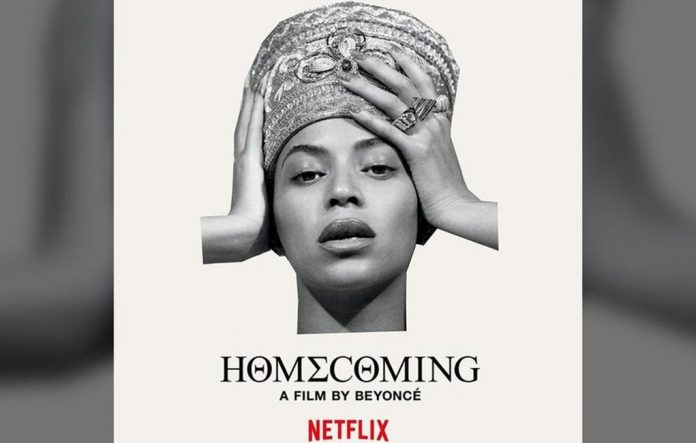 Beyoncé could have just come to the 2018 Coachella Valley Music and Arts Festival and played the hits.

The artist instead opted to conceptualize a performance that paid tribute to black culture, and championed — and even challenged — her black fans. The concert’s creation was painstakingly captured for “Homecoming,” a film Beyoncé directed and produced for Netflix that began streaming on Wednesday.

What made Beyoncé’s Coachella showing so radical was her mission to celebrate the black art that has long influenced popular culture even though its architects — especially the female ones — haven’t always been given their due from white America.

It was audacious for a performer whose celebrity has increasingly transcended her music to stand onstage at the holy grail of music festivals and perform with such specificity. The move could have been divisive if it hadn’t been such a jubilant affair.

In “Homecoming,” the performer lifts the veil on the grueling planning and rehearsals that went into mounting the ambitious set. You might not have been at Beychella, but you most certainly heard of it.

The nearly 2 1/2-hour film is a replay of the exquisitely choreographed and visually grand performance from dozens of perspectives — the way she intended it to look, Netflix executives explained before a private screening on Monday — while also providing a rare look into her personal orbit she’s so carefully kept at bay. Both a traditional concert documentary and the manifesto of a superstar artist no longer bound by convention, the film shows her Coachella performances through a tapestry of rehearsal footage, home videos, archival pieces and voice-over.

“Instead of me pulling out my flower crown, it was important that I brought our culture,” Beyoncé says over grainy footage of the cadre of black dancers, singers and musicians she recruited.

It’s a clever jab at the inherent whiteness of a festival that waited nearly 10 years before having a black artist top its bill and let another 10 go by before a black woman headlined. “Ain’t that ’bout a bitch,” Beyoncé famously said onstage.

The performance was explicitly an homage to the spiritual experience and rich culture of homecoming celebrations at historically black colleges and universities, and the sight of Beyoncé, clad in a sporty hoodie with her own sorority insignia, posed atop a pyramid stuffed with a drumline, orchestra, steppers, majorettes, breakers and dancers, was instantly iconic. The first 15 minutes of “Homecoming” is a straight-ahead concert experience, with the opening salvo — she sandwiched two of her biggest hits, “Crazy in Love” and “Formation,” with the black national anthem, “Lift Ev’ry Voice and Sing” — playing out from a flurry of angles.

And then we step back to nearly a year before she was set to perform, shortly after giving birth to twins, a pregnancy that was fraught with complications — and resulted in her postponing her Coachella appearance for a year.

She’s been generous with behind-the-scenes footage throughout her career and made a documentary about her life and career for HBO back in 2013, but it’s not often she lets us in on the moments when she’s feeling insecure or unsteady. We see her fail to perfect a routine and cut others that she can’t execute.

Beyoncé is at her most vulnerable when she’s juggling the rigors of building a performance of this scale with motherhood, but the tension in the film comes from her commitment to perfection in her craft. Every artistic decision is made by her, and her only — not that it comes as a surprise, particularly for those who can recall the famous clip of her detailing to a lighting director why a particular hue of blue would never work for black skin.

Nearly every moment of the eight months of rehearsal was captured on film, from the grueling first workouts and rehearsals to selecting the hundreds of dancers and musicians that appeared with her to costume creation to mapping the show and traipsing between the three soundstages.

It’s far more action than necessary for anyone just wanting to watch the concert, but it’s a revelatory — and celebratory — look at the boldest statement she’s made yet.