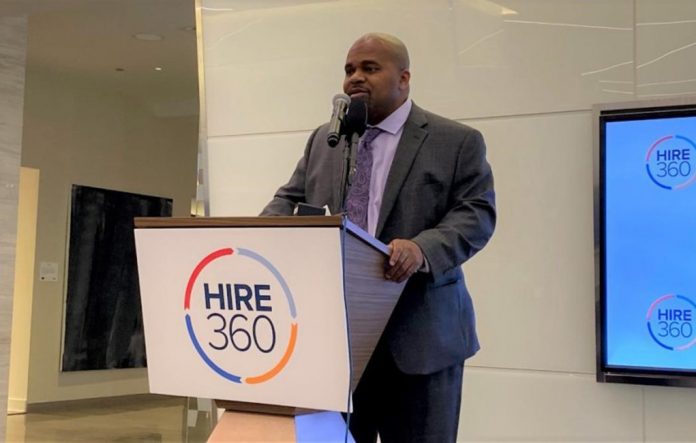 Labor unions and some of the biggest names in Chicago’s development community — attached to projects like Vista Tower, Lincoln Yards and The 78 — are teaming up with United Way of Metro Chicago to train thousands of people for careers in the building trades.

The nonprofit, called Hire360, is launching about a decade into a construction boom in Chicago, where the skilled labor pool has struggled to keep pace with demand for new skyscrapers.

The nonprofit’s emergence also coincides with public calls by Chicago Mayor Lori Lightfoot to intensify efforts to bring jobs and investment to the city’s South and West side neighborhoods.

“The goal is to get more involvement with African Americans, Latinos and women in the trades,” said Jay Rowell,Hire360’s executive director. “We’ll work with anyone, but those are the groups we’re focusing on.”

Apprenticeship programs and diversity initiatives are nothing new in Chicago, but Hire360 is unique in that it extends far beyond a single real estate project or a company seeking workers, Rowell said. By bringing industry giants together into one organization, it creates an opportunity for a deep, long-term pool of new workers, he said.

“It doesn’t reach any scale if you do this as one-offs,” Rowell said. “This is a unique partnership.”

Hire360 is modeled after a similar program in Milwaukee, called WRTP/Big Step.

Some of those companies are involved in a wave of multibillion-dollar mixed-use developments expected to be built over the next decade or more, including The 78 along the Chicago River between the South Loop and Chinatown, Lincoln Yards on the river along Lincoln Park and Bucktown and the Burnham Lakefront on the former Michael Reese Hospital site and other land near McCormick Place.

“What makes this time unique is you have all of those megaprojects, so there will be a need for apprenticeships there,” Rowell said. “Also, during the recession a lot of apprenticeships didn’t take place because there weren’t any new buildings going up.

“That kind of skewed the age. There’s going to be a gray tsunami, where many laborers will be retiring in the next couple of years. That will create more spots for apprentices.”

Partners already have contributed hundreds of thousands of dollars toward a first-year budget of $1.7 million, which is expected to increase to $7 million in the second year, Rowell said. The first year’s budget includes $1 million in state funding, he said.

After a smaller-scale pilot of the program in recent years, Hire360’s launch is set to be formally announced in a news conference Monday morning. The group hopes to send thousands of its candidates into apprenticeships over the next few years.

The program also plans to create an incubator to help form and fund new minority- and women-led companies, Rowell said.

Hire360 will cover costs for items like tools, hard-toed boots and other supplies.

“There are people with guns in their hands who do not know how to fill out an application,” Jenkins said.

Jenkins grew up in the Henry Horner Homes near United Center before eventually finding opportunities in real estate and construction, he said. The firm builds playgrounds and does carpentry work for clients including Chicago Public Schools and the Chicago Housing Authority.

“I grew up a gangbanger, tearing up my community,” Jenkins said. “I knew what my problem was, which was economics and opportunity. Hire360 gives people an opportunity to move to the next step.”

Applicants age 18 and older can fill out an assessment form on Hire360’s website, followed by an orientation and testing to match skills with specific trades. Those who emerge can earn about $20 per hour as apprentices, on the way to making about $40 an hour within a few years.

On average, there are about 3,500 apprenticeships per year in the Chicago area, Rowell said. “We want to recruit someone for every one of those slots, so we can make the workforce reflect the city,” he said.

Salvaging a profit from clunkers