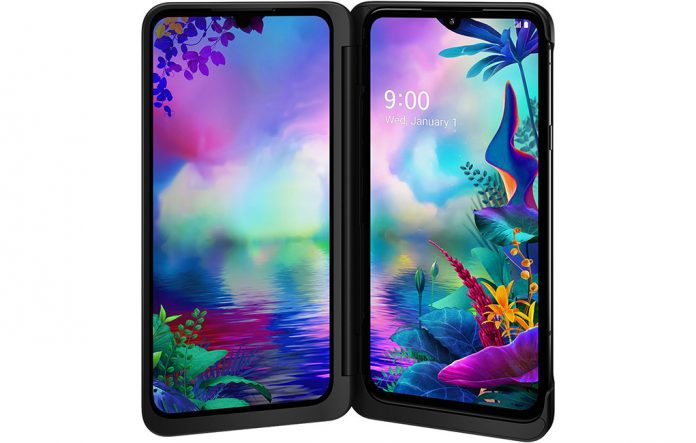 I’ve got to hand it to LG. They are trying hard to keep up in the flagship phone race.

For several years, cellphone design was kind of stagnant.

Phones from almost every company started looking alike — a rectangular slab of glass with rounded corners and no buttons on the screen.

Samsung was the first to really change things up with the Galaxy Fold, the first phone with a folding screen.

LG is hot on Samsung’s heels with its G8X ThinQ, which also folds, but not quite the same way.

The G8X ThinQ is a rectangular glass slab with rounded corners, but LG has added an optional second (and third) screens in the form of a dual screen case.

You slide the G8X ThinQ into the case (it resembles a wallet case) and it doubles your screen size and it adds a third screen on the front of the case.

This isn’t a foldable screen — the screens don’t connect in the middle. You can run one app across both screens, but the large gap between the screens makes it less than ideal.

I find having one app on each screen very nice. Add the fact that the second screen is in a removable case and things start to get interesting.

The dual screen case also has a small screen on the front to display the time and other notifications.

The phone’s screen and the screen in the dual screen case are both OLED displays, and they look great.

Both screens measure the same 6.4 inches. The main screen has a notch for the phone’s selfie camera, and the second screen has the same small notch, but it has no camera. Go figure.

The phone slides in and out of the case easily. The phone’s battery powers the screens in the case through the phone’s USB-C port, which is covered up when the phone is in the case. The case has a magnetic adapter for charging.

The G8X is a nice phone, but it doesn’t have any stand-out features when you look at it alone.

Let’s take a look at the specs.

It runs Android 9 with a Qualcomm Snapdragon 855 with 6 gigabytes of RAM and 128gb of internal storage. It has a microSD card slot.

The main camera has two lenses — a 12-megapixel 27mm (standard) and a 13-megapixel 9mm (ultrawide). The selfie camera has a 32-megapixel sensor with a 26mm (wide) lens.

There is a 3.5mm headphone jack and an FM radio.

The 4,000 milliamp-hour battery is capable of fast charging with an included USB charger, and the phone can also charge wirelessly, even when the case is in use.

The fingerprint reader is under the screen.

It’s also available from Amazon and Best Buy for the same $699.99. Or you can pick one up from AT&T or Sprint. (Thanks to AT&T for providing my review phone.)

Considering the Galaxy Fold costs almost $2,000, the G8X and dual screen case are an incredible value.

I love the idea of having a second screen that slips on and off in just a few seconds.

I wish other phone companies would offer the same kind of dual screen add on.

Kudos to LG for coming up with it and making it so seamless.

Swipe in from the right on the screen and you’ll see all the ways you can interact with both screens. Moving between the screen modes is simple and it works perfectly.

There is some awkwardness. Calling up an onscreen keyboard is restricted to one screen.

If you could turn the phone landscape and use the lower screen to type onto the upper screen, it would be great, but you can’t.

You can play a game on one screen while using the other screen as a controller, which is very nice.

The G8X doesn’t quite have the cool factor of the Galaxy Fold, but I did get more than a few people asking questions when I was using it. It did tend to attract attention.

This is the most intriguing LG phone I can remember, but it’s not because of the phone, it’s because of the dual screen case, which I’m hoping makes its way to more LG phones in the future.

What You Need to Know About the Galaxy Note 5

Tech Review: A Headset for Every Head