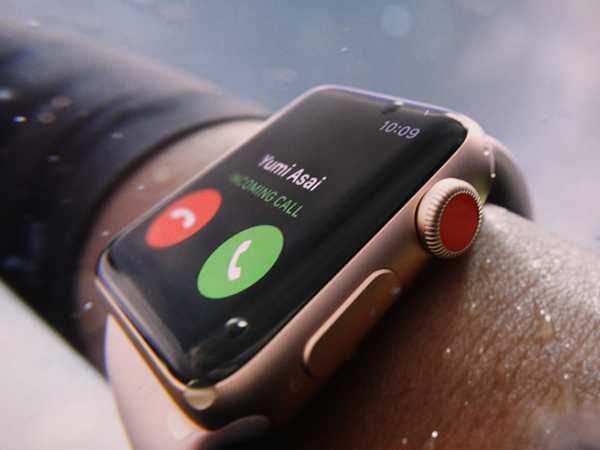 I went into a test drive of the Apple Watch Series 3 thinking it could be a real game changer for diabetes management. Now I?m thinking it should be considered by anyone with a chronic illness.

I?ll tell you why in a second.

First, the most important Series 3 feature for people with diabetes isn?t available yet, but it will be soon, maybe within a few months, after the Food and Drug Administration gives its blessing.

I have Type 1 diabetes ? the autoimmune kind, not the more common Type 2 typically associated with obesity. Like many Type 1s, I wear a sensor on my abdomen called a continuous glucose monitor to measure my blood sugar level.

This technology has been around for about a decade, but it?s only in the past few years that the accuracy of continuous glucose monitors has become good enough to count on.

Here?s how it works: My sensor, made by San Diego?s Dexcom, sends my glucose numbers to my iPhone, which in turn transmits them to my Pebble smartwatch for easy viewing. Very convenient.

Soon, however, the Series 3 will cut the iPhone out of the equation, allowing my sensor to interact directly with the watch via Bluetooth. That means if I leave my phone at home, or if I?m at the gym, I?ll still have ready access to my numbers.

That may not sound like much to someone with a working pancreas. But for a person with diabetes, this is a very, very big deal.

As with most chronic diseases, diabetes management is all about data. Having access to real-time data in the simplest way possible ? in this case, a glance at your wrist, no phone required ? represents a huge step forward.

Apple and Dexcom tell me the FDA?s approval is imminent.

In the meantime, I can report that the Series 3 takes a number of health care and wellness related functions up a level, not least because it?s by far the best smartwatch on the market in terms of both form and function.

That said, it should be noted that smartwatches ? even one as cool as the Apple Watch ? still aren?t for everyone.

The simple fact is that almost everything a smartwatch can do, a smartphone can do better. And since most people already carry phones, the whole idea of wearable tech is a classic case of solving a problem that doesn?t exist.

That?s not how Apple sees it. I sat down with some company execs who made a persuasive case for how an Apple Watch complements the iPhone, rounding out the digital experience with new convenience.

For example, they noted it?s much more discreet to check messages during a meeting with a peek at your wrist, rather than picking up your phone.

Then there?s the Series 3?s biggest technical improvement: cellular capability. In other words, you no longer need a nearby iPhone to make calls or access the Internet.

That?s undoubtedly a selling point for anyone who can?t imagine being digitally untethered for even a moment. I just don?t see a lot of people clamoring to make calls on their watch.

As a medical device, though, this turns the Series 3 into a lifeline. And that?s why I say anyone with a chronic illness should sit up and take notice.

Here?s what happened to me just the other night:

I took a walk with my dog and, foolishly, left both my phone and glucose tablets at home. Needless to say, I had a blood-sugar crash while out and about.

The last time this happened, about a year ago, I had to stop at a neighbor?s house for help. This time, I used the Apple Watch?s cellular capability to call my wife, Dick Tracy style. I told her where I was and she arrived in short order with a box of Wheat Thins.

This lifeline function should be attractive to people not just with diabetes. but also any number of other chronic conditions, including heart disease, asthma or even Alzheimer?s. It should similarly be of great interest to parents of kids with these conditions.

The Series 3 has all the fitness bells and whistles of similar sports gizmos. It tracks your heart rate in real time, which, even if you don?t have cardiac issues, can offer surprising insights about your ticker?s behavior while on the go and at rest. You can easily access the data through the iPhone?s health app.

The health app provides solid info as well on the number of steps taken daily, distance covered, hours spent on your feet and how many flights of stairs you?ve climbed. This is good stuff from an overall wellness perspective.

I was less enthusiastic about a separate watch app that monitors your breathing to help reduce stress ? more management-by-machine than I?m comfortable with. I also didn?t need a smartwatch quarterbacking my gym workouts.

On the other hand, I was very impressed with the reliability of the Bluetooth connection between the iPhone and the Apple Watch, which shouldn?t be a surprise considering they share the same DNA.

The connection between my phone and my relatively cheap Pebble watch is pretty dodgy. Also, Dexcom hasn?t come out with an official app for the Pebble, so I use watch faces hacked together by a collective of tech-savvy folk called Nightscout.

I?m not complaining. It?s awesome that these diabetes-connected guys are providing this resource, and it?s cool of both Dexcom and Pebble to allow free access to the glucose-reading watch faces.

But it?s definitely an improvement not having to reintroduce my devices daily.

I wrote last week about how Johnson & Johnson is getting out of the insulin-pump business, steering about 90,000 users of its Animas pumps (including me) to rival maker Medtronic. Medtronic has its own sensor, which can be accessed by smartphone apps but isn?t compatible with the Apple Watch.

A senior Medtronic official tells me an Apple Watch app for the company?s gear is in the works. He said it could take as long as two years to get it up and running. I suspect it?ll be a lot sooner.

One final thought: The FDA doesn?t classify the Apple Watch as a medical device, so it?s not tax-deductible. That needs to change.

These suckers are pretty awesome, but they?re also pricey. The Series 3 starts at $329 for the 38mm model without cellular capability, $399 for cellular-equipped. The slightly larger 42mm version ? which I recommend, having tried both ? costs $30 more.

Their value on the health care front is proven by reports that health-insurance giant Aetna may soon provide free or discounted Apple Watches to its 23 million customers as a wellness benefit. The FDA should facilitate tax write-offs just as they do for other physician-approved medical devices.

Also, most wireless service providers will charge you an extra $10 a month to add a cellular Apple Watch to an existing wireless plan. That strikes me as a bit much considering these things aren?t as data-hungry as phones and tablets. A $5 monthly charge seems more reasonable.

Bottom line: Not everyone will have a need for a high-end smartwatch, beyond the novelty factor.

But for people who require ready access to data to manage a medical condition, or who would benefit from knowing they can get help with the push of a button, this device is a game changer.

And it will only get better.

With Galaxy S5, Samsung Proves Less Can Be More