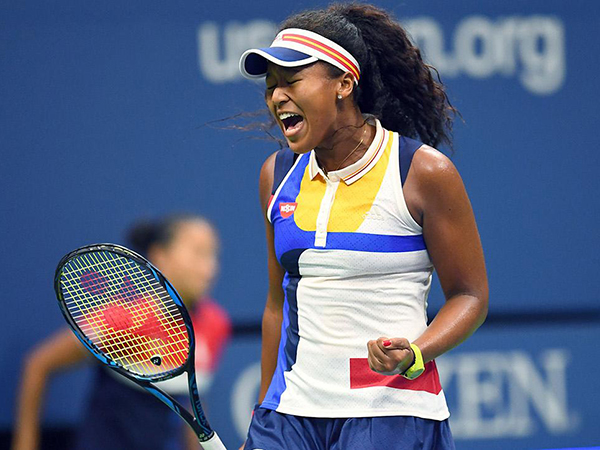 Don’t be fooled by the whispery, little-girl voice that makes Naomi Osaka sound much younger than 19. This young woman is ready to roar, and she made an emphatic statement about her potential when she knocked defending champion Angelique Kerber out of the U.S. Open with a stunning 6-3, 6-1 first-round victory Tuesday under the closed roof at Arthur Ashe Stadium.

Emerging from the locker room and seeing the sizable crowd left her “a little bit freaked out,” she said later, but she hid her emotions well. Nor did she falter when she sprinted away from a frustrated Kerber in the second set and her thoughts jumped back to last year, when Osaka held a 5-1 lead over Madison Keys in the third set of a third-round match on the same court but couldn’t close it out.

“I felt the same type of nerves come up at 4-1 in this match,” she said, “so I wanted to tell myself just to keep playing how I was playing and not let the nerves get over me as much as last year.”

She left the court in a torrent of tears last year. On Tuesday she left with her first win over a top-10 player and a growing sense of her enormous capabilities.

“Moving forward, I feel like I know that I can play with the top players now, so I don’t have to be as nervous as I was today,” said Osaka, who is ranked 45th in the world.

She played like a top player Tuesday in dispatching Kerber, who became the first women’s defending champion to exit the U.S. Open in the first round since Svetlana Kuznetsova in 2005.

Osaka was fearless, unleashing ferocious forehands and well-placed backhand winners. Her top serve hit 113 mph and she averaged 102, helping her to take control of the match after she broke Kerber’s serve for a 5-3 lead in the first set and for 4-1 in second. Osaka won when Kerber netted a return, capping a performance that blended all of the elements shown in spurts since she made her presence known by beating Samantha Stosur as a 16-year-old in 2014.

That victory, Osaka said, gave her “a little bit of a thought of, hey, maybe I can play against these players, right?” She can now, especially since she has recovered from an abdominal muscle injury that forced her to reluctantly retire from an evenly contested round-of-16 match against No. 1 Karolina Pliskova at Toronto a few weeks ago. Pulling out of that match “really hurt my feelings,” she said, but it was a mature and sensible decision that made it possible for her to be in top shape against Kerber on Tuesday.

“She’s a very aggressive player, but I know this before,” said a downcast Kerber, whose early loss guaranteed she will drop out of the top 10 in the point-based rankings. “She served very well and was going for it. Yeah, she played a very good match from the beginning.”

Osaka’s success brings an infusion of youth and freshness at a time the sport needs it, with Serena Williams off the court awaiting the birth of her first child and no one else able to achieve sustained success and seize the No. 1 ranking with much authority.

The youngest of two tennis-playing daughters born in Japan to a Haitian father and Japanese mother, Osaka moved to New York when she was young so the family could be near her father’s relatives. She has U.S. and Japanese citizenship and represents Japan although she doesn’t speak the language fluently; she takes post-match questions from Japanese media in Japanese but is more comfortable replying in English. She grew up on Long Island, not far from the Billie Jean King National Tennis Center, so winning here was a special moment for her.

“When we were little, we would come to the U.S. Open every year and even to practice. Sometimes I would play here,” she said. “So the site feels really familiar to me. It’s like nostalgic every time I come here, so I’m always really happy to play here.”

She’s not always happy with herself, though she’s working on that. Her coach, David Taylor, is playing a big role there.

“He talks to me a lot about positivity because I tend to be really negative on myself and to the point where I don’t really know what I’m doing anymore,” she said. “So, like, since Toronto, I would say, I have been being really solid about that.”

She will test her new resolve against the winner of Wednesday’s match between Denisa Allertova of the Czech Republic and Rebecca Peterson of Sweden.

“I feel like I’m the type of player that does better the more tournaments I play in a row or the more matches, because I learn from the last match and then try to carry that over to the next matches,” Osaka said, speaking softly but making her point loud and clear.

Web Surfing At Work Is No Longer Taboo

The Small Businesses of Ferguson