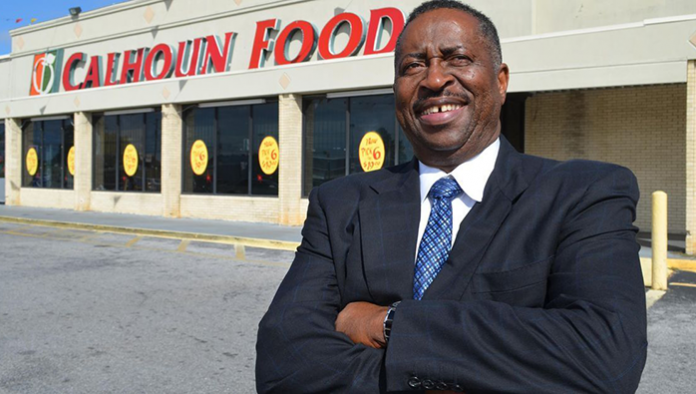 BY GLENN TOWNES??? As the head of Calhoun Enterprises, CEO Gregory Calhoun is always on the lookout for unique and exciting opportunities to expand his food and beverage empire. The Montgomery, AL-based entrepreneur recently joined forces with comedian Steve Harvey to tap into the mostly pallid egg production business.

TEN Ag Tech is the official name of the tech start up venture. ?We call it Just Ordinary Egg for short,? Calhoun said in a recent interview with TNJ.com. ?It’s revolutionizing the egg production and shell product industry.? Calhoun was the keynote speaker last week at a social gala in Voorhees, NJ recognizing the outstanding contributions of African American business, community and educational leaders.

Harvey and Calhoun started Just Ordinary Egg last March with a focus on poultry and healthy eating. The marketing niche of Just Ordinary Egg is that each egg is tagged with a reference or tracking code. The number is imprinted on each egg and enables the consumer to track the movement of the egg via a mobile device. The tracking system utilizes the relatively new RFID technology (Radio Frequency Identification.) The technology, which only started becoming widely used in the late 1990’s and early 2000, is widely used by thousands of American businesses, according to data from the Yankee Group, a Boston-based communications, networking and consulting group.

Calhoun said, ?A consumer can actually track the origin of the egg back to the farm it came from,? Calhoun said. ?People want to know where their food is coming from and just how fresh and healthy it is.?

Calhoun started his company in 1984 when he purchased his first grocery store?becoming at the time one of the first African Americans in the country to own a full-fledged supermarket. The business eventually grew to more than 15 stores throughout the south. The company has been a regular fixture on the Black Enterprise (BE) magazine Top 100 Black-Owned Businesses with revenues often perched near the $100 million mark.

Diversifying his interests, Calhoun eventually started several other businesses including an investment group, a communications company and other food and beverage based businesses internationally?including Cuba. ?I’ve had business interests in Cuba long before our country opened up {positive communications} with the country in recent years,? he said. Calhoun said poultry is big business in Cuba?with sales potentially stretching into the billions. As for the future, Calhoun said while he may not agree with much of the rhetoric of some egghead politicos, he said, ?Bringing business back to the U.S. and promoting entrepreneurship is always a good thing.?

More Than a Dream, A Reality: Healthy Restaurant “Dream Cafe &...