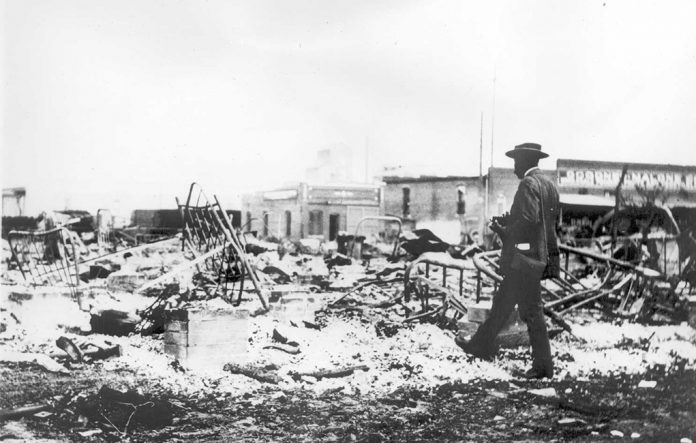 They marched into the thriving black Tulsa neighborhood on May 31, 1921, with shotguns and Molotov cocktails. Some wore masks, while others proudly showed their white faces.

Over the next two days, the mob killed hundreds of African Americans, drove thousands more from homes and looted businesses before burning them to the ground.

The rampage, known as the Tulsa Race Massacre of 1921, is among the worst incidents of racial violence in American history — and for nearly a century leaders throughout Oklahoma seemed determined to ignore it.

Now a reckoning is underway.

This week, Tulsa officials announced plans to excavate a plot of land that they believe is a mass grave containing many of the victims. The digging is scheduled to begin in April.

“We are committed to exploring what happened in 1921 through a collective and transparent process,” said Tulsa Mayor G.T. Bynum. “Filling gaps in our city’s history, and providing healing and justice to our community.”

Racial terrorism was common in the segregated South, and Oklahoma was no exception. The Equal Justice Initiative, a nonprofit based in Alabama that focuses on criminal justice reform, has documented 36 lynchings in Tulsa County between 1877 and 1950 — more than in any other county in the state.

Greenwood was something of a rarity in its heyday, a neighborhood founded after the Civil War that grew into a flourishing destination for blacks fleeing the Deep South just as an oil boom was getting underway. With its burgeoning black-owned businesses, it became nationally known as “Black Wall Street.”

“Greenwood epitomized black entrepreneurism in the face of Jim Crow,” said Ricco Wright, a businessman and activist who has pressed local and state officials to address its grim history. “It showcased black self-sufficiency and it showcased black excellence.”

He said his great-grandfather, a sharecropper outside Tulsa, would travel to Greenwood on the weekends to buy groceries and visit a doctor.

But the success of Greenwood bred resentment in white Tulsa.

The violence there began like so many other incidents of that era — with rumors that a black man had tried to sexually assault a white woman, in this case inside an elevator. A 2001 report from a commission that studied the massacre concluded that most likely the man had tripped and bumped into the woman, who screamed and ran off.

No matter the facts, as the news swirled, an armed mob assembled and stormed the neighborhood. For 18 hours, whites ran through the streets, shooting black residents and torching homes, churches, a hospital and a library, littering the streets with charred family Bibles, rag dolls, quilts and photographs.

Oklahoma officials initially put the death toll at 36, where it remained for decades. Only later did historians who studied the massacre arrive at the current estimate of 300.

Some 9,000 black people were left homeless. The property damage was estimated at $1.8 million — the equivalent of $26 million today.

Nonetheless, the massacre remained a footnote in Oklahoma history. Many Americans only learned about it last fall with the release of HBO’s superhero drama “Watchmen,” which focuses on race relations in Tulsa and includes a scene of the massacre.

By then, city officials had already started to respond to Tulsa residents pushing for justice. Last June, the mayor created a committee to investigate the massacre and attempt to find where the victims were buried.

Scientists located four potential sites using ground-penetrating radar and in December announced that “anomalies” at two of them indicated they could be mass graves.

One site, which officials plan to excavate this spring, was within the Oaklawn Cemetery. No date has been set for excavation of the other site, which is nestled along the banks of the Arkansas River.

If remains are unearthed, researchers could hone their estimate of the death toll and learn more about how people perished. Through DNA analysis, the remains could also be identified and traced to living descendants, who could then conduct proper burials.

For many in Tulsa’s black community, news of the planned excavation was a welcome first step.

“It’s no doubt long overdue,” said Wright. “Tulsa and Oklahoma has failed to really recognize the past until now.”

Karlos K. Hill, chair of the African and African American studies department at the University of Oklahoma, praised the news as a critical move toward honoring the victims and confronting a long avoided question: Are there mass graves?

“It’s been a sore spot in the community and a sore sport in the state,” Hill said.

“Think about all the death and destruction. And no one — to this day not a single person — has been held accountable. It’s devastating,” Hill said. “Hopefully people in the community get the answers they deserve.”

But residents also made clear that justice would depend on more than finding remains.

Nehemiah Frank, a Tulsa native who started the Black Wall Street Times, a digital media company focused on social justice issues, remembers hearing stories about the riots from his grandparents. Frank’s family once owned a shoe shine parlor in Greenwood, but they lost everything in the fires.

“We’re talking about generations being set back because of this racist terror,” Frank said. “Sure, the excavations are, no doubt, a good thing and a step, but we should at this time be talking about reparations of some sort.”

Rangel Has Swagger Back After House Censure