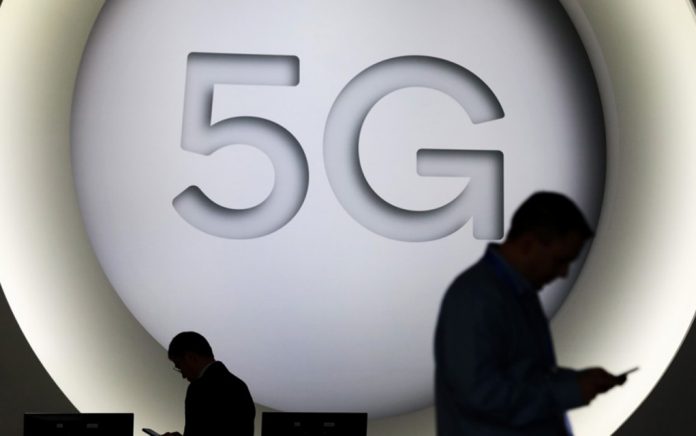 Lampposts around downtown Los Angeles are being wired with fiber optic cable and shoebox-sized gadgets to beam the fifth and fastest generation of cellular data, known as 5G, into homes and mobile devices.

This high-tech infrastructure build-out is the result of a deal between the city and Verizon — Los Angeles gave the wireless carrier a break on the fees for taking up space on streetlights in exchange for a package of amenities and services.

Such arrangements are common nationwide, where local governments have long leveraged access to public property and rights of way as a bargaining chip to accomplish policy goals.

But late last month, the Federal Communications Commission took the unusual step of nationalizing public infrastructure for 5G installation, throwing L.A.’s deal with Verizon and agreements between other cities and carriers into question in the process.

The FCC established a maximum price that local governments can charge telecom companies for small cell installations on public poles and in city streets: $270. The agency also established what it called a “shot clock” mandating that permits for small cell infrastructure be processed within 60 to 90 days, depending on the type of installation. If the permits take longer, the telecom companies can take cities to court.

Cities charging more than the maximum rate of $270 are open to litigation, and according to the ruling will have to prove that the higher fee is a reasonable approximation of costs.

“There has never been a federal decision to price-regulate the way local governments provide access to their own property,” said Blair Levin, a fellow at the Brookings Institution who served as chief of staff to the Clinton-era chairman of the FCC. “That’s an extreme step.”

FCC Chairman Ajit Pai said the ruling will hasten the rollout of the new technology, which debuted in the homes of some Verizon customers in Los Angeles this week. “Big-city taxes on 5G slow down deployment there and also jeopardize the construction of 5G networks in suburbs and rural America,” he wrote in a statement accompanying the ruling.

Local governments across the country, however, say the rules are too friendly to the telecom industry.

The United States Conference of Mayors called the ruling “an unprecedented federal intrusion into local (and state) government property rights that will have substantial and continuing adverse impacts on cities and their taxpayers, including reduced funding for essential local government services, and needlessly introduce increased risk of right of way and other public safety hazards.”

On Tuesday, Seattle announced plans to appeal the decision in federal court.

“This is more than just an unfunded mandate, requiring us to do something without paying for the cost,” said Seattle city attorney Pete Holmes. “This is more like a taking, frankly, without due process and without compensation. Cities have property rights, and that has really just been thrown out with this ruling.”

He called the deal “a gift to the industry” that will “deny us a return on our assets that we enjoy today.”

Fees and processes vary widely from place to place, and are often used to fund other city services. Holmes said that companies in Seattle can pay up to $1,800 per pole as an annual fee; prices go up to $5,100 for prime Manhattan locations and down to $148 in neighborhoods where the city wants to incentivize more deployment, according to Bloomberg.

In Los Angeles, the city said that the break-even point for small cell facilities is $800 per installation. But in exchange for amenities such as free Wi-Fi in Skid Row and at recreation centers, $400,000 of scholarship money, and launching an innovation center in the city, L.A. is charging Verizon just $175 per device per year for 10 years for up to 1,000 installations, plus the cost of electricity.

Jeanne Holm, L.A.’s deputy chief information officer, said the city cut a good deal: “Verizon brought a bunch of stuff to the table which, in my opinion, is well worth that offset, and our financial analysts have also agreed.”

The details of the city’s deal with Verizon are currently in front of the City Council for approval, as are preliminary plans for a mobile 5G deal with AT&T.

Although the city’s fee for Verizon is below the maximum set by the FCC, the new rules could give the carrier a chance to renegotiate on terms it considers more favorable.

Jonathan LeCompte, president of Verizon’s Pacific market, said he couldn’t speak on the specifics of the Los Angeles deal without the financials in front of him, but said “if it’s a little bigger delta between the numbers, there might be a different plan of attack.”

In a letter to the FCC, Mayor Eric Garcetti urged the commission to rewrite the ruling before its adoption, arguing that the decision would “insert confusion into the market, and sow mistrust between my technology team and the carriers with whom we have already reached agreements.”

The L.A. city attorney’s office did not respond to requests for comment.

Small cell 5G technology relies on higher-frequency radio waves than current wireless services to deliver faster speeds — but at shorter ranges. Those higher-frequency signals, which measure in millimeters, can be obstructed by objects of a similar size, such as leaves and raindrops.

The FCC says the new rule will save money for telecommunications companies, which will redirect those funds to deploy 5G service to less-connected rural areas.

Industry experts dispute this hypothesis — and leading telecoms say rural areas are not their first priority for 5G service.

“No one believes that’s going to happen,” said Levin, the former FCC official. “Inside the Beltway, they say if they save them a buck in New York they’ll go deploy in Montana. That’s not just dumb, that’s a special kind of stupid.”

The FCC did not respond to a Times request for comment.

“Rural America will have 5G over time,” he said.

LeCompte, of Verizon, said that rural markets are not a part of the company’s initial rollout plan, but added that “obviously, we need to care for those.”

The deal between Verizon and Los Angeles has allowed the city to focus on infrastructure in underserved neighborhoods with low broadband access.

“For the initial rollout, we agreed that the downtown area made a lot of sense — partly because we knew the convention center would be an early hub, and wanted to reach out to areas like Pico-Union and others that are underserved around USC,” Holm said.

Wearables Get Smaller and Smarter