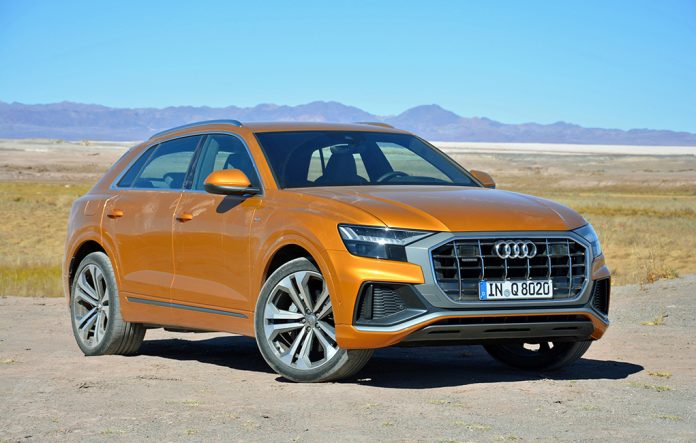 Audi attempts to redefine the idea of what a luxury brand’s flagship is with its 2019 Q8 Quattro, and does it successfully enough that an Aloft hotel employee ran into the middle of the Grand Circus Park traffic circle to admire the shimmering coppery SUV as I drove by.

The Q8 has top shelf looks, comfort and features, but driving one made me appreciate the A8L sedan that used to be Audi’s top model even more than I already did. SUVs are the rage of the age, however. The Q8 outsold the A8 four to one in the United States through March and will out-earn the A8 substantially.

Before the SUVs inherited the earth, or at least the valet parking lane, it was easy to recognize a luxury brand’s flagship. It was the company’s biggest, most expensive and luxurious sedan. Some people will argue that expensive sports cars like the Audi R8 and Mercedes SL are flagships, but they’re a sideshow, pretty faces with marginal impact on the bottom line. The real money was in big sedans. They were the truest expression of luxury brands’ prestige and capability: The A8, BMW 7-Series and Mercedes S-class.

The German brands are just catching up to a reality American luxury brands have lived for years: SUVs are the new kings of the road. The Escalade and Navigator, respectively, have been Cadillac and Lincoln’s flagships for decades.

They’re also Caddy and Lincoln’s biggest vehicles, with seats for seven. The Q8 is unlike them and Bimmer and Benz’s top SUVs in that it has just five.

Rating: Three out of four stars

Brand new, much shared with Q7

The Q8 is an addition to Audi’s lineup.

Audi builds it in Bratislava, Slovakia, alongside the bigger Q7. The Q7 has three rows of seats and room for seven. Q7 prices start $53,550. The Q8 has the same wheelbase as the Q7, but is 3.0 inches shorter.

The bigger vehicle costs less because Audi thinks its high-end buyers want style more than passenger capacity. Unspoken about the Q8 and other stylish five-passenger SUVs is that the target customer also doesn’t want to be confused with a parent on the way to band practice.

The Q8 measures 196.6 inches long, 6.7 inches less than the seven-passenger BMW X7, and 7.3 inches shorter than a Cadillac Escalade. It’s also shorter than other competitors including the Lincoln Navigator and Mercedes GLS 450, but 4.5 inches longer than the Range Rover Sport.

The Q8 can tow up to 7,700 pounds. That’s slightly more than the X7 and GLS 450, virtually the same as the Range Rover Sport, less than the Escalade and Navigator.

Like many luxury SUVs, the Q8 is not intended for off-roading. Its all-wheel-drive system is engineered more for control on slippery surfaces than rugged terrain.

It stickered at $89,945. All prices exclude destination charges

The Q8’s prices are comparable to the larger other luxury SUVs with which it competes.

The Q8 is recognizably an Audi, but it looks like nothing else on the road. Low and wide for an SUV, big tires and wheels at the corners make it look balanced, and LED running lamps and turn signals ensure it’s recognizable at night. The design is restrained compared to the X7’s brash grille.

The steering is quick, with a good on-center feel.

The Q8’s handling is admirable for a tall vehicle, though at 67.2 inches tall, the Q8 is 3.9 inches less tall than an X7, 7.2 less than an Escalade. There’s very little body roll on fast curves. The SUV feels nicely balanced when you push it hard into a corner. Braking is excellent.

The Q8’s EPA fuel economy rating of 17 mpg in the city, 22 on the highway and 19 combined falls in the middle of the pack. The combined rating trails the bigger and heavier X7 by a whopping 3 mpg. The EPA estimates that would save a driver $350 a year.

The rear seat has relatively little leg and shoulder room. Front accommodations are excellent. Headroom is good front and rear.

Flagship sedans like the 7-series and A8L promote their rear seats’ luxury, room and features as prominently as infotainment because the rear passenger is often the most important person in the car. Audi clearly thinks Q8 buyers are more focused on the driving experience.

Cargo space is good considering the Q8’s size, but its bigger competitors all offer more.

Audi’s adoption of touch screens improved the usability of its controls enormously. Still, the screen could respond to touches more quickly, and dials probably remain the best way to adjust temperature and fan.

Don’t be surprised if an SQ8 with a tweaked V6, or some other performance model, joins the lineup.

How to deal with a difficult employee