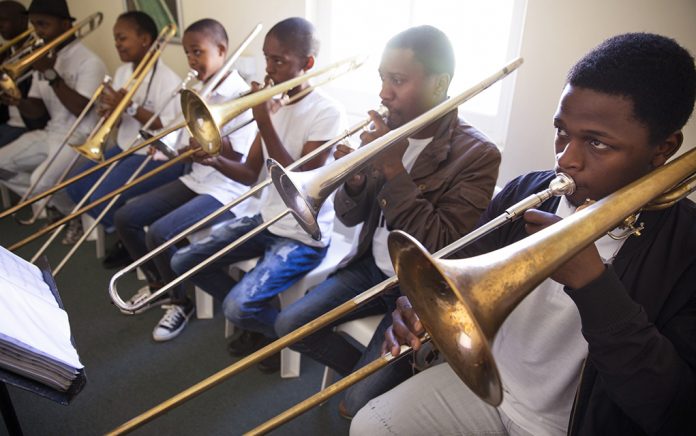 In a sunny room at the Durban Music School, an 18-year-old trumpet player shot her hand in the air.

“I have a question about your embouchure,” said Palesa Ndlela, referring to the way trumpeters position their lips on the mouthpiece. “Because I’ve been told I need to improve mine.”

“I’ll tell you what,” said Manny Laureano, the Minnesota Orchestra’s principal trumpet. “We’re both going to close our eyes.”

He and fellow trumpeter Robert Dorer shut their eyes and listened. Ndlela played an arpeggio. “Louder,” Laureano instructed, his eyes closed. She played again, louder this time. “Now sit up from your chair like you’re standing.” She played once more. “Take a much bigger breath.”

This time, her tone was brighter and fuller and fine. Her eyes got wide. She and the rest of the students burst into happy laughter. Laureano laughed with them.

“OK, we just fixed your embouchure,” he said.

Laureano was among a dozen Minnesota Orchestra musicians coaching small groups of student instrumentalists recently before the orchestra’s concert that night in Durban’s grand City Hall, one of five stops on its South African tour.

These intimate daytime gigs — at music and elementary schools, with 10-year-old newbies and seasoned youth orchestras — might be as important as the ticketed performances on this tour. Often, the audiences that pack the rooms, classrooms and courtyards are black and mixed-race, in neighborhoods far from the city center or concert hall.

Such exchanges have become “a hallmark” of the Minnesota Orchestra’s tours, said Jessica Leibfried, the orchestra’s director of education and community engagement.

This trip, in fact, was inspired by music director Osmo Vänskä’s experience working with a South African youth orchestra in 2014, which he called “a turning point in my life.”

Some people, Leibfried said, might expect the musicians to go into a school thinking: “We are the professional musicians; let us bequeath this learning upon you. Absolutely not. … When musicians are OK with being vulnerable, so much comes back.”

‘THEY’RE SO FULL OF PROMISE’

Between flights and rehearsals and concerts, musicians lugged instruments — some borrowed, as their own were still en route — to various schools.

Vänskä often comes, too. He conducted the Cape Town Philharmonic Youth Orchestra while many of his principal musicians coached their young counterparts. At the Cape Town Music Institute, a school tucked behind the bleachers of Athlone Stadium in the Cape Flats, students hooted as a brass quintet from the orchestra played, then wowed the players with their own bands.

“I’m not going to forget this one,” orchestra trombonist Doug Wright said afterward.

His quintet later performed with string and woodwind quartets for a packed classroom of students and parents at Euricon Primary School in Elsie’s River, a Cape Town suburb. But not before the school’s choir sang for the group — in English, Swahili and Afrikaans. A 12-year-old soloist led the choir in “I Am a Small Part of the World,” which they sang holding hands.

In the back, cellist Marcia Peck wiped her eye.

“I just could see my daughter at Hopkins grammar school singing the same songs,” she explained afterward. “They’re so full of promise at that age.”

Recently, those young singers won a silver medal at a national choral competition, said their choirmaster, Donovan Meyer-Adams. Although he teaches computer science and math, Meyer-Adams, 31, felt it was important to restart the choir, partly to “keep the children motivated and away from all the social ills outside our doors.” He dreams of having music classes, with skilled instructors to lead them. He draws on the music theory he’s learned in church and a year of piano lessons.

When he spoke about the Minnesota Orchestra’s visit, he beamed.

“Oh, my word, they’re amazing,” he said. “And I feel that these children don’t always have the opportunity to see what music can do.

“The talent is there. They just need someone to come in and advance it.”

HOW LOW CAN HE GO?

Onstage at Euricon Primary School, Steve Campbell demonstrated how high his tuba could go — then how low. He played lower and lower, bringing his body closer to the floor with each note. The kids shrieked.

One boy giggled so hard that he, too, fell onto the floor.

“It’s fun to look at their faces,” Campbell said later. “Their mouths are open; their eyes are wide.”

He watched as groups danced and sang in the school courtyard, the audience joining in.

“It’s coming from their soul,” he said. “I have to remind myself of that, too. Rather than looking at the music, at the paper.

In an interview, Laureano said that meeting with young musicians is “one of the most delightful aspects of being on tour.” In the past, touring would involve a hotel, a meal and a show — “all these little hit and runs, as we used to call them. Now, you’ll play a concert and then the next day you’ll meet up with a bunch of young students who want to be you one day. They’ll get to shake your hand, maybe get a little advice — a couple tips that might make a difference.”

A handful of students at Durban Music School, their trumpets balanced between their sneakers, watched as Laureano demonstrated a haunting solo. His rich, full tone warmed the room.

“That’s a basic way of playing,” he told them. “Now, if I was a trumpet player from France, I’d play it this way.”

He repeated the solo, then asked: “What’s different?”

“The vibrato was a little faster and the tone was just a little mellower, right?” Laureano said. “You see, there are many, many different languages that we speak when we play. And depending on who the conductor is, they might want a different language.”

“Music is language,” Laureano said, “and trumpet is our tongue.”