Home Lifestyle Arts & Entertainment I Love Seeing Other Black Women on the September Covers — But... 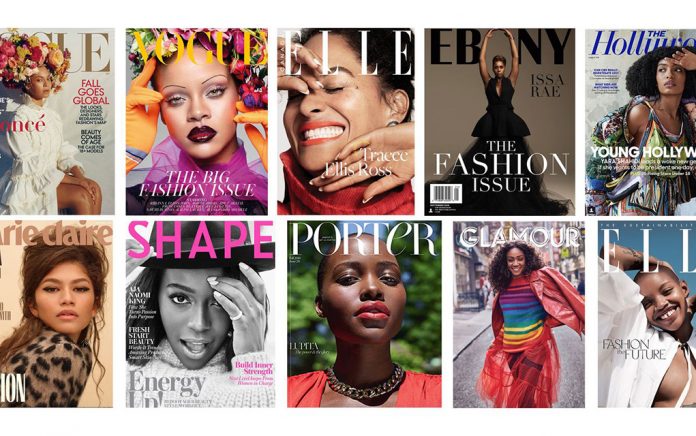 In high school, Saturdays were reserved for Seventeen.

During the week, after getting home from school and basketball practice, I would walk into my room and see that my best friend from New York had arrived in the mail; she always welcomed me with the help of teen celeb cover stars, from Lucy Hale to Jennifer Lawrence.

Between my evening routine, I knew our weekday time together would simply be insufficient — how could I possibly get hip on all the month’s happenings in such a short window? Our catch-up session would have to wait.

Saturday morning would finally come, and the only thing that stood in the way was my mother’s charge to “do all your chores before you do anything else.”

Once my room re-emerged from the week’s chaos, I would grab my glossy girlfriend, curl up in the corner of my freshly made bed, pull my knees to my chest and enter into my sacred time. Every single word — from the front cover to the captions to the sidebar shopping details in the feature well — was read, studied and gushed over.

We bonded over boys and beauty products, fangirled over our favorite celebs, and she helped me prep for prom years in advance. From time to time, we even talked about parent or friend problems, breakout management, and she sometimes shared stories from other real-life girls.

Our friendship was long-term and meaningful, but it wasn’t totally fulfilling; I often felt like she glazed over an obvious part of who I was, that she understood the quirks of me being a teenage girl, but rarely did she acknowledge the nuances of me being a black teenage girl — whether within the pages or with the cover stars.

Fast-forward to now, and my heart explodes as I see at least 10 women who look like me, who have my hair texture, whose work reflects aspects of my life, on the covers of some of the biggest magazines in the world — and on the September issues no less.

The September issue is the most coveted, most profitable, biggest (in literal page numbers) issue of the entire year. It’s typically the fashion issue, which takes a deep dive into the most anticipated looks of the fall season, often representing renewal and the movement into a new time of the year.

Being on the September cover meant you had made it; that you were someone with an inordinate amount of interest, appeal and relevance. Historically, that did not include being black.

“When I first started, 21 years ago,” wrote Beyoncé in her personal reflection for her historic September Vogue cover, “I was told that it was hard for me to get onto covers of magazines because black people did not sell. Clearly, that has been proven a myth.”

Imagine the little black girls who see actress Lupita Nyong’o, a dark-skinned black woman who sports her natural hair in a low cut, radiate on the cover of Porter magazine, which was named the “desire issue.”

In a world where dark skin is often feared, and in the African-American community where colorism has deemed it less attractive, seeing Nyong’o on the cover of a “desire” issue tells women who look like her that they are beautiful, and that they — along with their accomplishments — are worth embracing and celebrating.

To see black women who vary in age, occupation, marital and mommy status, skin tone and size elevated to the highest point by an often-critical, exclusive fashion industry is a refreshing change of pace that makes the teenage black girl in me feel redeemed.

And yet, with all the melanin oozing from these covers, I will admit that I am a little conflicted.

For these women, this moment is revolutionary. This moment, for the sake of the ladies on the covers, as well as all the other black girls and women who see these covers and feel affirmed, deserves rejoicing. But for the magazines, this moment feels a bit troubling.

There is a fine line between celebrating the women on the covers, versus celebrating the magazine for making the decision to include the women. The latter feels strange to do. It seems odd to me to celebrate magazines that have historically shunned black women because a woman’s skin color didn’t fit their brand or couldn’t make them money. It seems odd to applaud them for shedding a bias.

The sister’s keeper in me doesn’t want these September cover stars’ moment to be conflated with the idea that they have “finally” arrived.

These black women have been masters at their crafts for years. All but two of the women we see on the current September covers have been on an Essence cover, a brand that has been dedicated to — and thriving at — celebrating black womanhood for almost 50 years.

The general audience titles have fallen way short of representing all of society, and finally highlighting these accomplished black women can feel as if these outlets are only now seeing these women’s successes and deeming them worthy.

I guess the bright side is that they finally caught on, right? If so, welcome. The black girl magic has been — and always will be — in abundance.

(Article written by Christen A. Johnson)

Michael Jackson’s Brand is Stronger Than Ever — But What About...

Prince’s Estate Releases 23 Catalog Albums to Streaming Platforms, Plus a...