Home Lifestyle>Arts & Entertainment What the Star of ‘BlacKkKlansman’ Learned from the Real Black Cop Who... 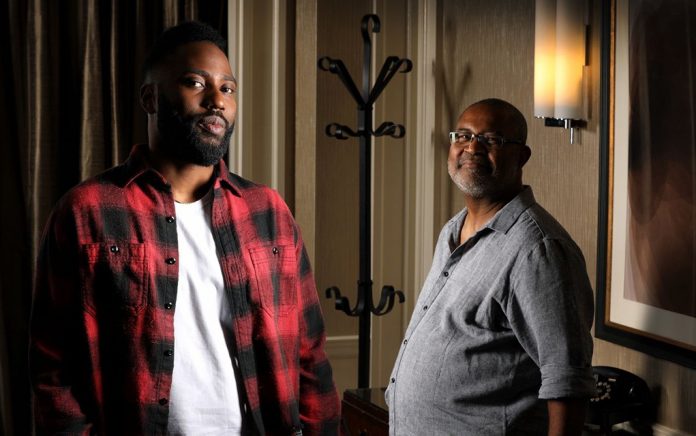 “Now, you’re with the L.A. Times?” Ron Stallworth asked, his eyes narrowing on the voice recorder that has been placed in front of him. “What’s the angle on your story?”

Over his 32 years in law enforcement, Stallworth says, he developed a suspicion of journalists. Once, he gave a television reporter an interview about how Utah’s narcotics bureau was handling street gang shootings. When the piece aired, it was full of embellishments, according to Stallworth. So he called up the reporter, told him he’d personally recorded their interview as well, and blackballed the local TV station for three years.

“So I always ask reporters where they’re going with their story,” the 65-year-old said. “What slant they want to put to it.”

Today, the angle is supposed to be relatively straightforward: Stallworth had arrived at breakfast to discuss a new movie based on his life, “BlacKkKlansman,” alongside the actor who plays him in the film, John David Washington. The Spike Lee joint, which opened to strong reviews and a promising $10.8 million in just 1,500 theaters over the weekend, is based on a 2014 book Stallworth wrote about his investigation into the Ku Klux Klan.

In 1978, serving as the first black detective in the history of the police department in Colorado Springs, Colo., Stallworth noticed a classified ad in the local newspaper seeking enrollment in the white supremacist group. He answered the ad, and a few weeks later received a phone call from a Klan organizer asking why he wanted to join the cause.

Stallworth began spewing racial epithets, saying he hated anyone without “pure white Aryan blood in their veins.” Thus began the detective’s often comical, frequently dangerous investigation into the KKK: A white colleague impersonated him at the Klan’s meetings, while he maintained close phone relationships with Klan organizers, including former Grand Wizard David Duke. (Duke did not respond to an interview request.)

When his book was published four years ago, it was sold only online, and it didn’t generate a lot of business. Nonetheless, Stallworth says, within 30 days of publication, he began receiving inquiries from Hollywood producers interested in adapting his story for the big screen. He had serious conversations with three production companies before he got a call from QC Entertainment, which was behind Jordan Peele’s “Get Out.”

“I was reserved,” he recalled. “People had talked a good game, and then nothing happened. So I said: ‘I don’t want to talk to you on the phone, I want to fly there and look you in the eye.’”

On his own dime, Stallworth flew from El Paso to L.A. for a meeting. He made his reservations clear: He didn’t want his story to be “Hollywood-ized.”

“No screeching car tires when they don’t need to screech the tires,” he said, shaking his head. “No cops running down the street shooting guns. Red lights and sirens going when you’re 10 miles away and you’ve got a clear open road. Dumb. Doesn’t happen.”

In other words: I recognize this is a movie, just don’t get crazy. The QC executives promised Stallworth they’d try to make the story as truthful as possible, but they were curious: Who did Stallworth want to play him?

At the time, Stallworth wasn’t aware that Washington had a 34-year-old son, John David, who had recently ended his professional football career and was transitioning to acting on HBO’s “Ballers.”

“It’s just ironic as heck that the role landed in his son’s lap,” Stallworth said, nodding toward the actor. “And I couldn’t be happier. I didn’t get the daddy, I got the son, and the son did a magnificent job. Daddy’s gonna be beaming with pride, if he isn’t already.”

“Oh, he saw it at the Brooklyn premiere and he’s been talking about it still, Ron,” Washington told Stallworth. “He’s overseas selling ‘Equalizer 2’ now, but he’s been calling and checking in, so it’s been nice.”

“I’m glad to hear that,” Stallworth said. “You deserve it.”

Washington was given Stallworth’s book months before he received a screenplay, and he immediately wanted to talk with the author. He begged Lee to set up a meeting, but the director wanted the actor to hold off. Still, he was able to sneak in one call to Stallworth, leaving a fawning voicemail expressing how excited he was to be tackling the role.

“He basically said, ‘Mr. Stallworth? This is John David. Well — I, uh, I’m kind of nervous talking to you. I’m gonna play you,’” Stallworth said, imitating an anxious Washington. “He was very hesitant, and there were these pauses and nervous chuckles. ‘I feel a little nervous. I want to make your journey come alive. I’m nervous chuckling because of all you’ve done. I’m a little intimidated.’”

The two would eventually meet at the first table read for the project — Lee had invited Stallworth and his wife, Patsy Terrazas. (Terrazas goes nearly everywhere with her husband, including this interview, where she chimed in occasionally with cheerful anecdotes.) After the cast members had introduced themselves to one another, the director asked Stallworth to stand up and said: “Let’s hear it from the real man.” As he recounted his story in his own words, he passed around his laminated KKK membership card, which he carries in his wallet and likes to show off at any opportunity.

Though Washington said Stallworth “owned” the room, internally, he was struggling to contain how starstruck he was.

“I remember we were sitting there across from John David and Topher Grace (who plays Duke) and we’re like pinching each other, like, ‘Can you believe this?’” Terrazas said.

“This is when ‘Star Wars’ was about to come out, so we’re sitting there looking at Kylo Ren going, ‘This is weird,’” Stallworth added, referring to cast member Adam Driver’s character in the “Star Wars” films. “And after, John David gave me his number. I was surprised, like, ‘Movie star’s giving me his number?’”

“OK, I’m not a movie star,” Washington insisted. “You’re the hero. Ron, do you know what you’ve done? All right? Are you kidding me? Once we got going, I was fine, but initially, it was like meeting a Randall Cunningham.”

Soon, the two had developed an intimate rapport, speaking weekly on the telephone. Washington took pages of notes, asking his real-life counterpart everything from where to stand during a sting operation to what kind of dancer he was during his disco days. The actor even rang Stallworth up before one particularly emotional scene in which the detective is tasked with serving as Duke’s security guard at an event where Klan members are fully outfitted in KKK regalia.

“He called and said, ‘Ron?’ — and there was this urgency in his voice,” Stallworth said. “‘We just finished setting up the banquet scene for tomorrow. How did you do this? I’m in a room with people I know are acting, but they’re wearing Ku Klux Klan clothes. And I’m kind of intimidated. How did you do that?’ I started laughing and said it was a job. I couldn’t be intimidated.”

“I needed to hear that, though,” Washington said. “Me, John David, I couldn’t do what he did. I’d have gotten too emotional. I’d have cracked. I was ignorant before I did my research of a lot of African American police officers out there who are doing their job and doing it the right way. There were no terrorist attacks or violence from the Klan during his investigation. To me, that’s a success.”

Stallworth is still stoic about his investigation, which stopped a handful of KKK cross burnings that could have incited violence in Colorado Springs. And just last weekend, he said, he heard from Duke for the first time in 40 years. He was in a hotel room in New York, doing press for “BlacKkKlansman,” when his phone rang.

According to Stallworth, in their conversation, Duke acknowledged that the Colorado Springs investigation did take place, but he kept saying “my recollection is different than yours.” He paused and brought out his cellphone, pressing play on a voicemail that he said was from Duke. In the message, he told Stallworth he’d recorded an episode of his radio show disputing some of the facts in the film.

“I encouraged people a couple of times to buy your book and to read it,” Duke said in the message. “Anyway, just wanted to let you know that.”

“If you didn’t know who that was, you’d be like, ‘That sounds like a nice guy,’” Washington said, reacting to the voicemail.

A handler approached, alerting Stallworth and his wife that they’d miss their flight if they didn’t leave for the airport imminently.

“Well, Mr. Movie Star, I don’t know when I’m going to see you again,” Stallworth said, getting up from his seat.

“Hit me up, man. You already know,” said Washington.

“I can’t do that. You’re a movie star,” Stallworth said with a chuckle. “Love you, son.”

Michael Jackson’s Brand is Stronger Than Ever — But What About...

The Beguiling ‘I Am Not a Witch’ is a Wickedly Smart...