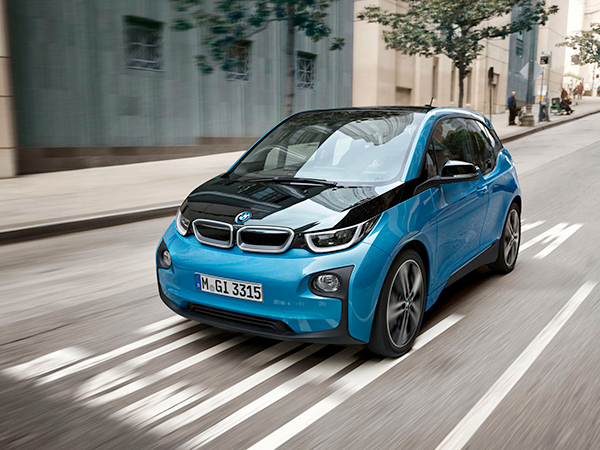 Nothing has changed on the outside for 2017. The duck pun may have been a reach; it looks more like geometric Picasso tiles for kids were fashioned together to form an eco-pod on wheels, especially in the new hue of Protonic Blue.

For the curious, it is interesting. For the disinterested, it doesn?t matter. The i3 is shameless in identifying as an ecoconscious car, from the eucalyptus trim to the carbon-fiber reinforced plastic body. It expands on range for 2017 with a larger battery but the plug-in vehicle space has expanded so much that it may not matter.

Back in the day ? three years ago ? the i3 was an emissions-free trailblazer. It was the German brand?s first mass-produced electric vehicle and spearheaded BMW?s ?i? designation for plug-in vehicles, which BMW expects to account for 15 to 25 percent of sales by 2025. Every core model gets a plug-in variant, with two more fully electric cars planned by 2020.

While the i3 was a vital first step for the brand, other brands have been building out their electrification programs. The benchmark for range in electric vehicles has surged ahead to the mid-200 mile range, thanks to the more affordable Chevy Bolt (238-mile range) and the similarly priced Tesla Model 3 (220- to 310-mile range).

Range has increased from 72 miles to 97 miles (114 miles in the BEV), and battery capacity has increased 50 percent while not taking up any more space in the floor of the vehicle.

Even with the 2.4-gallon, two-cylinder 38-horsepower backup engine providing an additional 80 miles of range, the i3 REx lags the competition in range and sales. It has been outsold by eight other plug-ins so far in 2017, according to insideevs.com.

Yet there is nothing else like it on the market. Despite my initial, visceral reservations about it, there is something charming in how the entire design delivers on its intent to serve and protect environmentally minded drivers.

The higher seat height and raised roof provide excellent visibility, spaciousness and legroom. The center console ends at the seat edge because there is no drivetrain going through the center of the car ? the motor and generator are in the rear to power the rear-drive axle. The lack of clutter on the dash, which is underscored by a ribbon of eucalyptus connecting the doors, is crowned by a tablet-sized display screen that is larger than the cluster display behind the steering wheel.

Operationally, it?s easier to drive than a gas car and other electric vehicles. Shift the odd gear knob on the column to drive and away it whirs. Take your foot off the gas and regen braking will capture the kinetic energy to recharge the battery and slow the car down to a near stop. There?s no paddle like the Bolt or heavier regen setting like Tesla.

Charging overnight from our standard 120-volt outlet did the job, but a Level 2 240-volt install would get it done in five hours.

It?s punchy fun like most electrics, with uninterrupted torque of 184 pound-feet getting the car to 60 mph in just over 7 seconds. The thin Ecopia tires and tallish roof outweigh the perfect weight distribution so it handles worse than other Bimmers ? it?s got more roll than a baker.

Cargo volume of 15.1 cubic feet is on par with other hatchbacks or subcompact crossovers, and with the rear seats folded down there is plenty of space for the four-legged Rex and chew toys. With the seats up, there is ample room for four adults. The rear doors are suicide doors, or rear-hinged, and there is no pillar between the front and rear doors. Getting in the back is easy, getting out is a reach.

The price is also a reach, which may be why it?s not selling as well as the competition. Yet for around-town drivers who want to minimize ecoguilt in unique style, the i3 is the total package.

Donating Your Car to Charity: 5 Tips